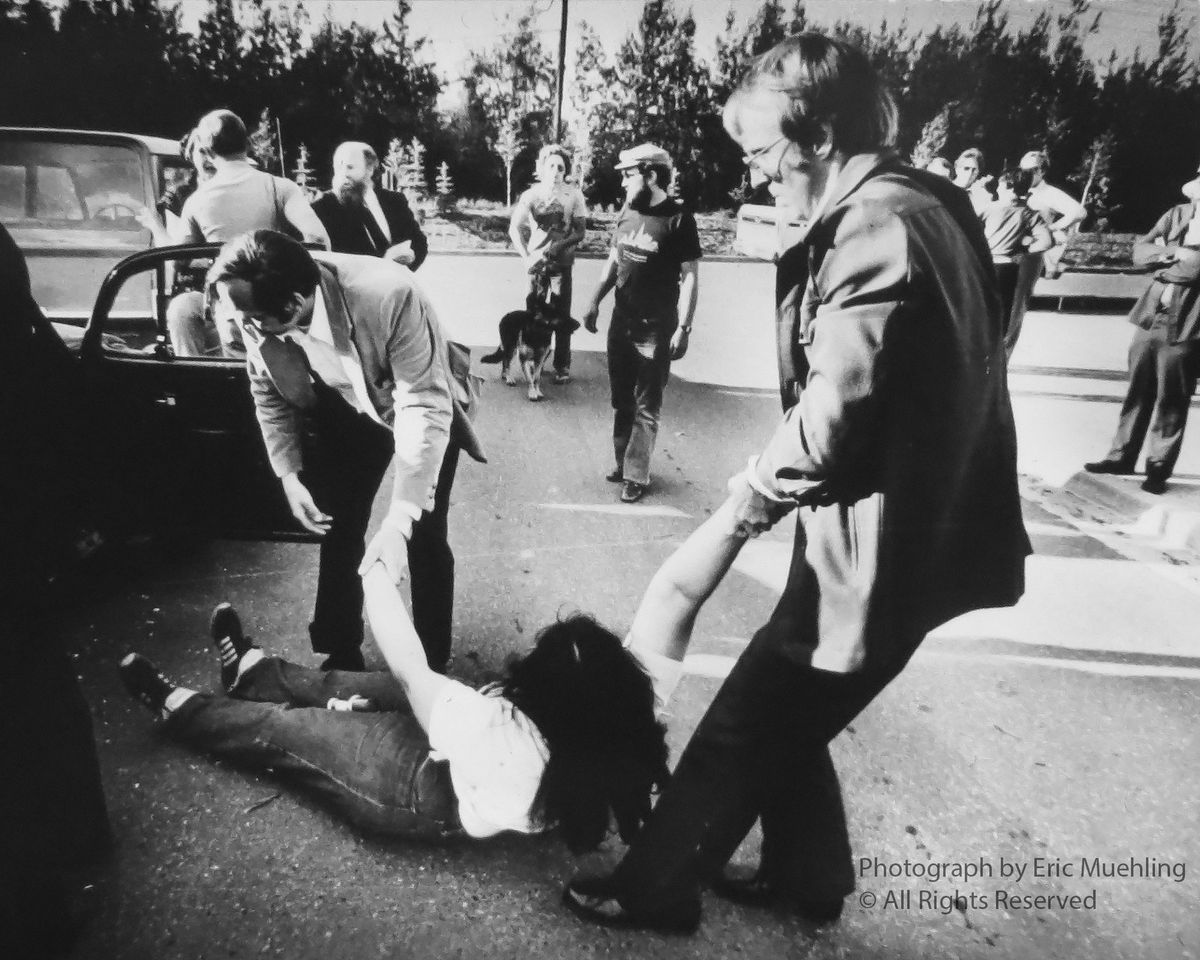 Mona Oliver is dragged from her car by IRS agents outside the federal building in Fairbanks in 1979. (Eric Muehling/Fairbanks Daily News-Miner)

Mona Oliver is dragged from her car by IRS agents outside the federal building in Fairbanks in 1979. (Eric Muehling/Fairbanks Daily News-Miner)

If fellow passengers had not taken videos of the United Airlines customer service treatment in which a paying passenger was upgraded with a broken nose, a concussion and two missing teeth, the incident would not have had the same worldwide impact.

The unnecessary rough stuff reminds me of something that happened on a summer day in 1979 in Fairbanks when IRS agents displayed a similar level of cluelessness.

In dealing with a situation that could have been resolved with a little common sense, the IRS agents acted in a way that made everything worse.

The Fairbanks incident had far-reaching and positive consequences, but the whole thing would have gone unnoticed had it not been for the work of photographer Eric Muehling, a friend who worked with me for many years at the Fairbanks Daily News-Miner.

A tax protester was on trial that day in Fairbanks and others had shown up to lend support. Fellow tax protesters Stephen and Mona Oliver were in court observing the proceedings when IRS agents decided that was a good time to seize the Olivers' Volkswagen Beetle for $4,176 in back taxes. The car was parked outside.

A tow truck had the 9-year-old VW on the hook and the rear tires in the air when the Olivers left the courthouse at about noon. They rushed to get into the car before it could be hauled off and they refused to get out. The tow truck lowered the car to the ground and a seven-hour standoff began.

"We're going to stay in our car. It's our car," Mona told News-Miner reporter Dan Joling, now an Associated Press reporter in Anchorage.

IRS vehicles blocked the car in and the Olivers could not drive away. Joling wrote that friends of the couple volunteered to lift the VW and carry it to get around the IRS vehicles, but Stephen nixed that idea.

Throughout the warm afternoon, he and his wife got out of the car at times and talked to acquaintances and friends, who brought them beverages and watermelon. Whenever IRS officials approached, however, the Olivers got back in the VW, rolled up the windows and locked the doors.

"I recall staking out near the parked Olivers' VW that day because I could sense something was going to happen," Muehling said the other day.

At about 7 p.m., in full view of the photographer, IRS agents used wooden nightsticks to break two windows on the car and remove the Olivers.

If anyone did this today, it would be on Facebook in a minute. The story spread more slowly with the technology of the time, but it produced a strong emotional response because of the visual impact of seeing a woman being dragged out of her old car.

You didn't have to agree with the Olivers on their views about taxes to realize the IRS had mishandled this situation to an extreme. The photos appeared on front pages in Fairbanks, Anchorage and across the state and country.

A couple of years later, CBS News' Morley Safer did a piece on "60 Minutes" about tax protests and made reference to the Fairbanks incident — and Muehling's photos.

"Just one of the things the IRS did do, and there's a pictorial record of it, is the case of Mona Oliver, a tax protester from Fairbanks, Alaska," Safer said.

IRS Commissioner Roscoe Egger told Safer that the agents had made "judgmental errors" when they broke the windows on the VW and dragged the woman from the car in Fairbanks. He said this led to a new policy at the IRS.

"As a direct result of this, we have changed our procedures," Egger said. "We now require that no revenue officer use force in making a collection unless either his personal safety is jeopardized or that of a third party."

One of my relatives worked in customer service and training for the IRS in Seattle in the 1980s. She said the particulars of this case had been made known to everyone she worked with at the IRS as an example of what not to do.

And the VW? At an auction at the federal building three weeks after the seizure, a dozen protesters walked with anti-IRS signs and shouted over the auctioneer. The car sold for the minimum bid to the only bidder for $500.