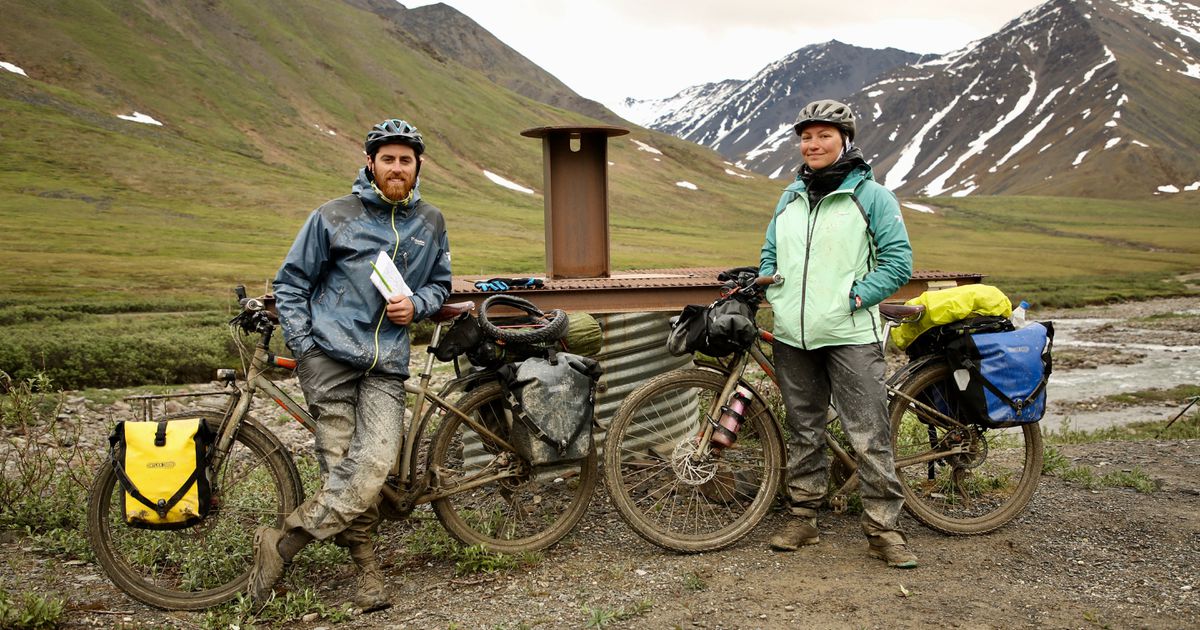 On the seventh day of what she hopes will be a two-year bicycle journey from Alaska to Patagonia, Sophie Planque hit a rough spot on the Dalton Highway.

The 28-year-old French TV journalist and her companion, Frenchman Jérémy Vaugeois, 28, were rolling downhill about 50 miles north of the Yukon River when the trouble began June 20.

The last thing she remembers was stopping hours earlier that day at Coldfoot, many miles to the north. Vaugeois witnessed the accident, as he was riding about 50 yards behind her in the midafternoon sun.

The road surface near the Kanuti River had made for good riding just before they encountered a short stretch of gravel, said Vaugeois. He said a northbound tractor-trailer moved to the middle of the road to avoid a pothole and hit the loose gravel at about the same time as Planque.

The rocks flew and must have shocked Planque, who lost control of her bike. She went over the handlebars and landed on her head.

"Always wear a helmet," she said a week later in Fairbanks, adding that the battered helmet saved her life and she is lucky to have the chance to get a new one.

The truck did not stop after the accident. That must have been because the truck driver did not see the bicyclist go down.

Vaugeois, who has traveled a lot by bicycle, said he did not know at first how seriously Planque was injured, but she was in great pain and had a head injury, as she kept asking every 10 seconds what had happened.

Riding a bicycle on the Dalton Highway is always difficult, but it can become dangerous in an instant when something goes wrong. Help is rarely close at hand and there are no emergency medical facilities.

On that day, Planque and Vaugeois got lucky. A research team bound for the University of Alaska Fairbanks science center at Toolik Lake came upon the scene some time after the accident.

One of the men was a trained wilderness first responder and had a satellite phone. He called the Toolik Field Station, 370 miles north of Fairbanks, and set an emergency response in motion.

In the end, the researchers helped get Planque to Pump Station No. 5,  about 30 miles from the accident scene. She flew to Fairbanks on a Guardian Flight medevac.

"We would have liked to write to you in other circumstances, but let's not be so pessimistic! We avoided the worst," Planque and Vaugeois said on their website. "In the middle of the Dalton Highway, the first major stage of our adventure, Sophie was the victim of a rather unfortunate accident."

She said they had planned and saved for more than a year for this trip and have sponsors supporting them and French schools with classes following their journey. Vaugeois worked as a clothing store manager before resigning to take on this adventure, while Planque left  her TV job. She said they liked their work but wanted a challenging adventure. They are getting one.

They have health insurance, purchased in France, and they believe it provides good coverage for emergencies of this type, though they do not know for sure what the expenses will be.

"We don't know that part of the story yet," she said.

Planque and Vaugeois, who live in Normandy, said they are "very lucky" to have met so many welcoming people in Alaska. She said that includes the researchers who saw to it that their bikes and packs made it to Fairbanks and others who have given them a place to stay while she recovers, inviting them to local events.

Her right arm is in a sling from a broken shoulder and she has at least a six-week recovery ahead of her but does not need surgery and is looking forward to the rest of the 20,000-mile trip. She suffered a concussion but said she had no bleeding in her brain.

After a final X-ray later this month, she will know when she can get back on her bike.

"My shoulder is getting a bit better," she said Thursday.

"We are very lucky to have these people around us. Otherwise, it could have been impossible to stay in here to heal up," she said.