Going home: After 20 years of drinking, a sincere struggle to get off the streets of Anchorage 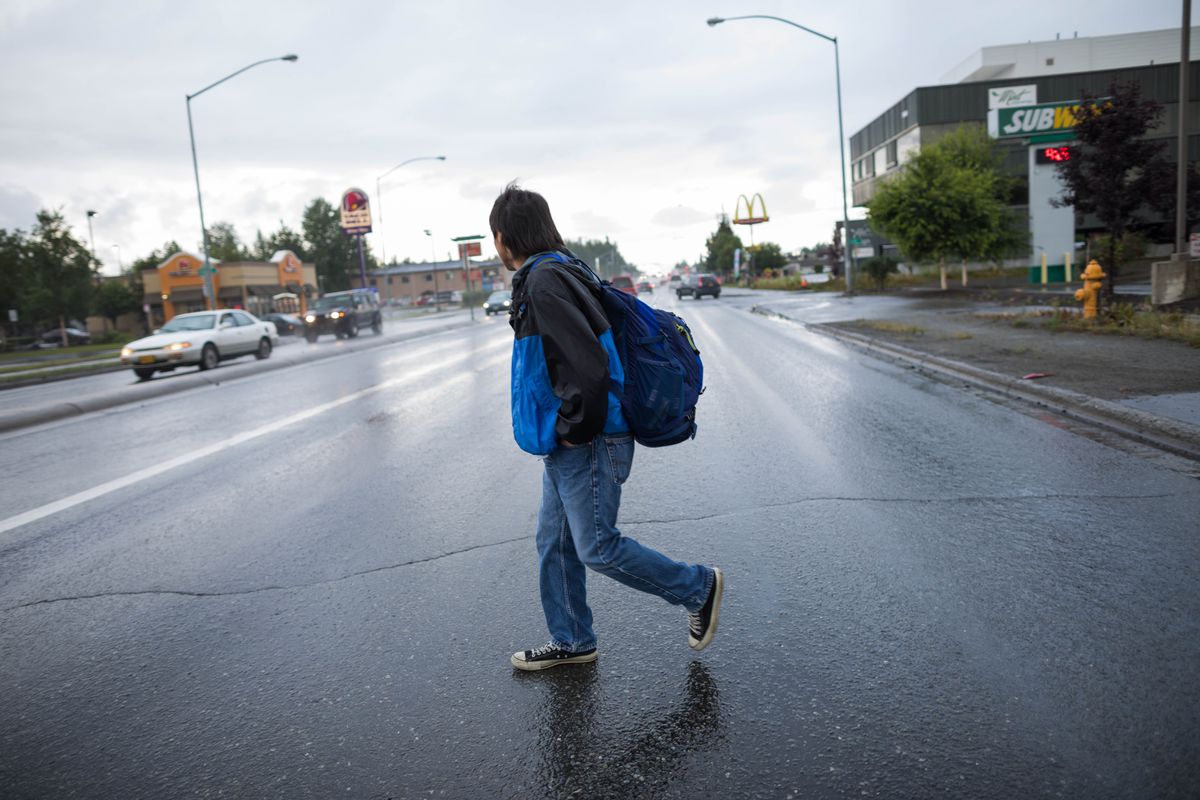 Melvin Ivanoff crosses Tudor Road, walking to the bus stop before a job interview Thursday, Aug. 10, 2017. Ivanoff recently got out of jail and is trying to stay sober and find a steady job. (Loren Holmes / Alaska Dispatch News)

Melvin Ivanoff crosses Tudor Road, walking to the bus stop before a job interview Thursday, Aug. 10, 2017. Ivanoff recently got out of jail and is trying to stay sober and find a steady job. (Loren Holmes / Alaska Dispatch News)

Melvin Ivanoff stood up at a meeting of Alaska Native men and said he was afraid he would soon be on the streets again.

Ivanoff stayed drunk and homeless in Anchorage for 20 years. He was one of those guys who asks you for bus fare in parking lots and who you see drinking in parks or on the roadside.

He would use his Native corporation dividends to buy a bus pass and alcohol. The panhandling money all went to drinking.

Now he had been sober for more than four months. Every day he applied for jobs, trying to overcome his felony record, weak reading skills and the mental impact of his years of alcohol abuse.

But his allotted time at a rescue mission was up. It is a shelter, not permanent housing. To get your own housing, you need a job.

If he went out on the streets again, Ivanoff wasn't sure how he would keep up his job search. He needed a way to wash clothes and an address to put on applications.

"I'm trying to do something to get around this negative thinking," he told the men.

"I know you're trying to change," said Leonard Olrun, the First Chief of the Alaska Nations Re-entry Group. "Don't give up that positive thought. Don't give up hope."

[Going home, part 1: How Alaska Natives released from prison get stuck in Anchorage]

After the meeting, a caseworker found a bed for Ivanoff. But for one night, he had nowhere to stay.

Once again, he would have to walk.

He took a bus to the Dimond Center and walked back downtown, ending up at the Anchorage Gospel Rescue Mission on Tudor for breakfast. But it wouldn't open until 5 a.m., three hours later, so he kept walking.

Ivanoff carries everything he owns in his backpack, which is fresh and clean, like his jacket and clothes. Carrying it all night hurt his shoulders. His feet hurt, too. He is 49 years old. He's been robbed and beat up many times, but he doesn't go to the doctor unless his pain in unbearable.

He said camps are not safe and it's too difficult to remain sober in the Brother Francis Shelter, because people there actively use drugs and alcohol.

But he is used to walking. That's how he used to stay alive on frigid winter nights, walking from one end of the city to the other until the library or hospital opened and he could warm up.

I met Ivanoff at 7 a.m. at the mission and we talked until I drove him to another job interview at 10:30, to gather shopping carts at Target.

I've seen these Native men on the roadside all my life. I never knew how hard it could be for them to get home.

More than anything, Ivanoff wants to go back to Mekoryuk, on Nunivak Island, to help his elderly father. There, he said, during times when he wasn't drinking, he would get up in the morning and write down what he needed to do each day.

The list: Tidy up and do housework; get water; check the fuel tank and top it off if necessary; check the wood for his dad's steam bath and chop enough for a two-week supply; put everything in order.

Then he would check the tide and, if it was right, go up-river, for firewood or to pick berries. He used to fish with his father and brother. He worked for whoever needed help. No application needed. In the village somebody asks if you want to work and you work.

"If you're sad, lonely, think about your hometown," Ivanoff said.

Olrun confirmed that Ivanoff, who is his cousin, was sharp once, a good fisherman. But now he has trouble doing his treatment because his memory comes and goes. He can't always understand what is asked of him.

That's the problem with the job interviews, too. Ivanoff said he prepares, planning answers to the questions he might be asked. But when the questions come, they have too many words. He needs time to understand, but interviewers become impatient.

He says it might be because of the times he was hit on the head when he was on the streets.

Ivanoff went in and out of jail more than 30 times over the years. He decided to change after a recent felony.

"I kind of blacked out," he said. "I had a knife and all I remember was walking inside Bean's Café and the next thing I noticed I was outside talking to a police officer, and I got arrested. I don't remember knifing that guy, but I was on camera."

He had tried sobriety before. But besides fighting cravings, he was lonely.

Looking for friends led to the Avenue Bar. They drank and talked, fast and loud, funny and dumb. When he was sober he would be quiet. Until he took another drink.

Now his old friends are all gone. He's the last one on the streets. And when he sees drunks he doesn't want anything to do with them anymore.

"This treatment, I'm trying to prove to my family that I can stay away from alcohol and hopefully quit for good. I've got to stay in line for my family. I've got to prove to them I can do this. And I'm still doing it," he said

But it is a long, long, lonely road.

The conditions of Ivanoff's release require him to get a job and stay in treatment for his anger and substance abuse here. Unless that changes, he will be stuck in Anchorage another 13 months.

He can't stand to think of that amount of time. He closed his eyes and shook his head.

"It shouldn't take this long to get home, once you're trying," he said.