How Anchorage sacrifices a neighborhood to substance abuse and homelessness 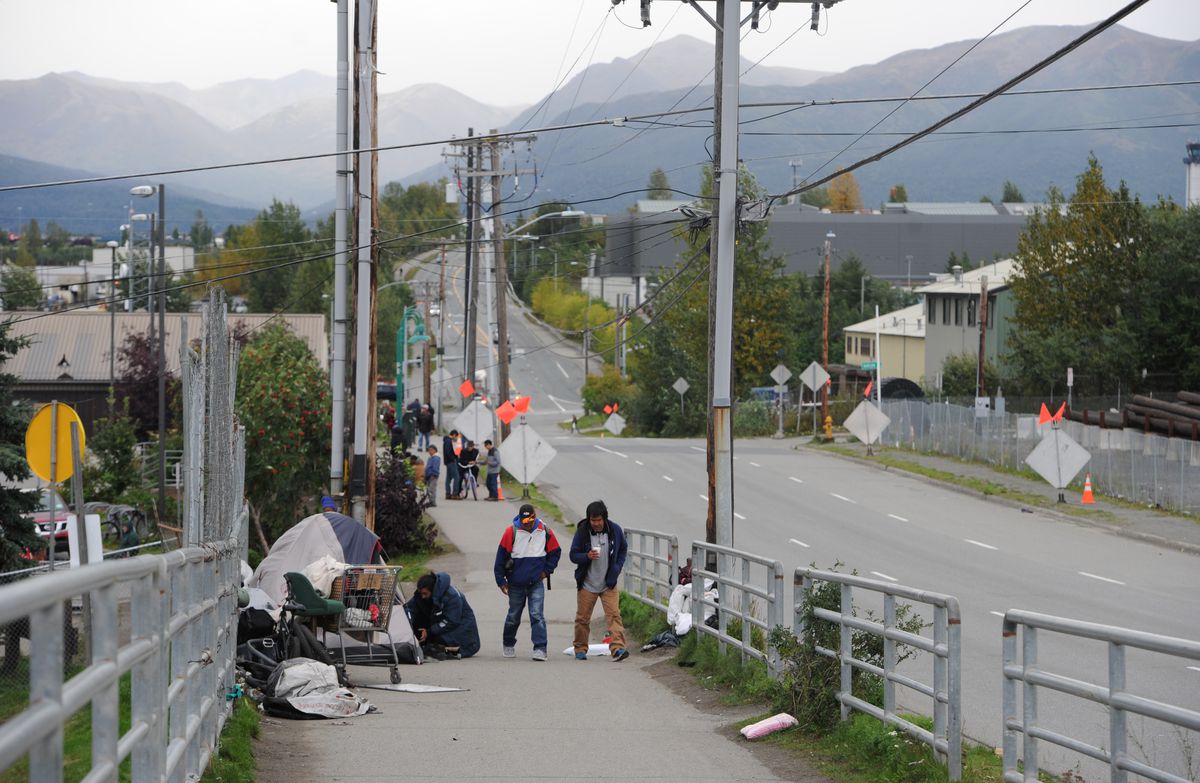 Homelessness brings out the worst in Anchorage, and not only among the homeless.

We've followed a policy over more than 30 years of dumping the problem on low-income, minority neighborhoods. They're the same neighborhoods that once were designated ghettos for African-Americans.

But the blame doesn't belong only to the officials making the decisions. This seems to be how the rest of city residents want it.

The current incarnation of the debate revolves around a building on B Street, between the Federal Building and the Delaney Park Strip downtown, a former prison halfway house. Mayor Ethan Berkowitz wants to lease the building to house homeless elders.

The most effective solution to homelessness is to house people and help them deal with the problems that made them homeless, which most often are substance abuse or mental illness. Recovery does happen, but out on the streets it is unbearably difficult.

But the B Street building also would continue the concentration of social services near the Fairview community that has been burdened by them for decades. Fairview also contains the focal point of Anchorage's social problems, the Brother Francis Shelter and Bean's Cafe.

With the current Spice and opioid epidemics, the streets around the shelter have gotten horribly worse, thickly populated by drugged-out zombies. But the gathering of troubled people has been a problem since the shelter opened in 1983.

"All of the stabbings that are going on are happening basically because of the way we have organized these services," said Anchorage Assembly member Chris Constant, who represents the area. "We've set it all together, next to the jail, and in the same compound."

I used to have Constant's job and fought the same hopeless fight, resisting liquor pushers who profited from these miserable lives and the social service agencies that enabled them.

The late Ruth Moulton, a crusader for Fairview, suggested the city put a fence around the compound with a liquor store inside it. The main difference would be to reduce the number of street people defecating in people's yards on booze runs through the neighborhood.

Homeless alcoholics have told me she was right. The shelter helps them to spend all their money on liquor. Anyone trying to stay sober or off drugs is wise to steer clear of the dirty scene there.

[Going home: After 20 years of drinking, a sincere struggle to get off the streets of Anchorage]

But the system works for wealthier areas of Anchorage and their comfortable Assembly representatives. Or so they think.

I was on the Assembly when a corrupt halfway house owner engineered a 9-2 vote for an ordinance written by his own lawyer that limited his type of business to my district, effectively protecting him from business competition.

When I asked a colleague if this guy had bought the vote, I was told that was unnecessary. Why would anyone want these facilities in their district?

Nancy Burke, the mayor's homelessness and housing coordinator, said she sympathizes with Fairview's concerns. But the B Street facility should at least improve the situation for the neighborhood.

Out of 240 people at the shelter, typically around 65 are over 65 years of age, she said. If they were housed in something like assisted living for former street people, with food on site, they would be pulled out of that troubled population.

"Many of those elders will tell us they don't want to be around all of that. They want to be somewhere where they can get stabilized, be quiet and be able to think," Burke said.

A previous housing project in a converted hotel, Karluk Manor, improved its immediate area, she said, and national research shows drinking goes down 30 percent among residents of facilities like it.

"Recovery happens. That's the message that is getting lost here," Burke said.

In our conversation, Constant directed much of his anger against Burke. But she didn't create this situation. Burke once tried to house unwanted people outside this red zone.

Five years ago, while at the Alaska Mental Health Trust, she worked on a project like Karluk Manor for the mentally ill to be located in a hotel on Wisconsin Street, on the border of the Turnagain and Spenard community council areas. After ugly meetings with residents, funders pulled out.

The difference between that Long House Hotel project on Wisconsin and the Red Roof Inn on Fifth Avenue — which became Karluk Manor — was the political power of a middle-class neighborhood compared to that of a traditionally minority area.

Besides having low voter turnout, the Fairview neighborhood has only one Assembly member to represent it. All other districts have two. Perhaps more important, the people there can't afford to make big campaign contributions.

This is how politics has always worked. At one time, Anchorage had legal restrictions keeping non-whites out of nicer subdivisions. Minorities were segregated into Fairview. That system ended only with the Fair Housing Act in 1968.

[How some Anchorage neighbors redeemed the city's racist past]

Fairview residents fought for decades to improve their community and largely have succeeded. But the rest of the city is holding down the neighborhood by effectively redlining social problems there.

"Everybody believes the homeless people deserve the dignity of housing and a roof over their head, unless it's past 15th Avenue or DeBarr. It's only dignity if it's north of 15th Avenue," Constant said. "We're enabling everyone who doesn't live downtown to feel like they're doing something good."

The irony here is that keeping housing for the homeless out of your neighborhood doesn't keep homelessness out. Many more homeless live in camps than in the shelter. Police shut down the camps, but they just move.

We have them in Turnagain too. They are dirty, dangerous places. You would be safer with a building next door housing these people, with social workers on site, than having them lurking in the trees around an illegal campfire, passing a bottle or shooting up.

What's best for the homeless and for justice is for everyone to accept a share of the problem.

This column was altered from an earlier version. The column contained a statement from Municipal Homelessness and Housing Coordinator Nancy Burke that a third of alcoholic residents of the Karluk Manor facility go into recovery. Burke later clarified her statement to say that national research shows that drinking reduced 30 percent over two years in facilities like Karluk Manor."