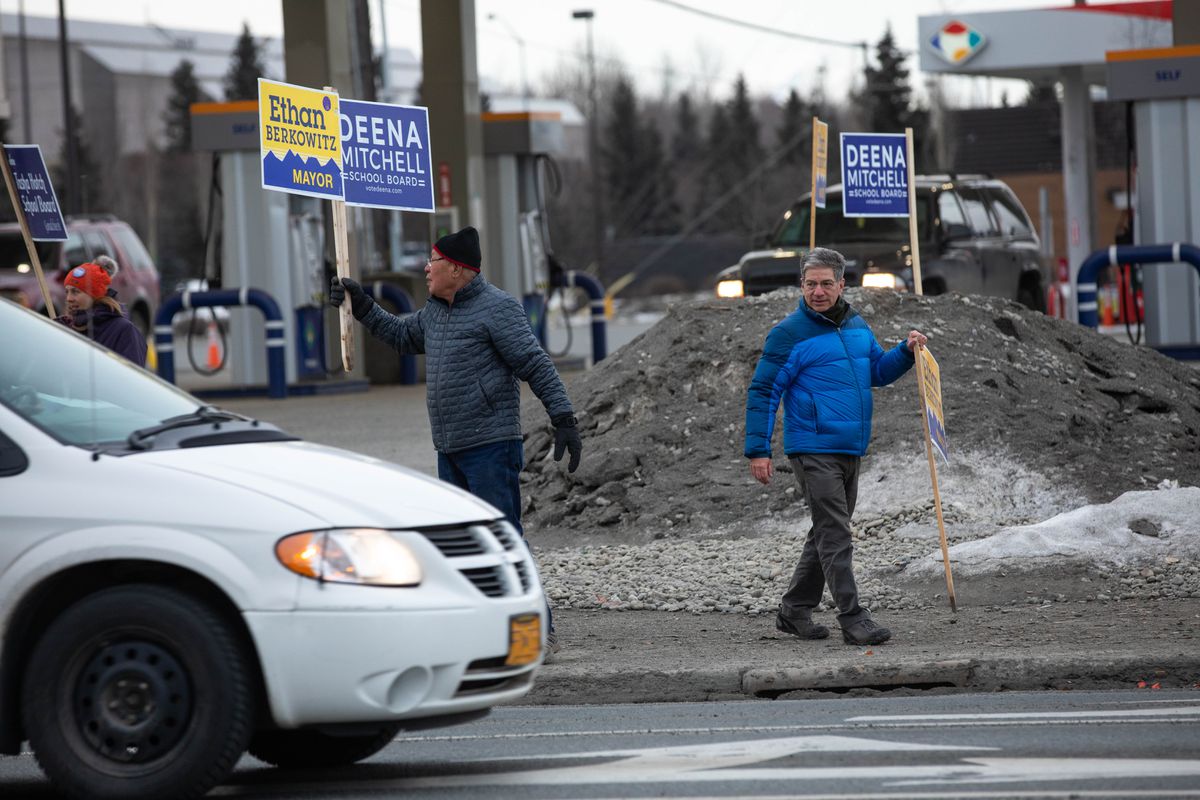 Did Tuesday's election say Anchorage has become a progressive town, or just that one side is momentarily better at running election campaigns? The answer is a bit of both.

The historic nature of what happened comes into view when you pull back. No issue has divided Anchorage more consistently or more deeply than LGBT rights since the very founding of the Municipality 43 years ago. With voters, one side always won.

While thousands of votes remain to be counted, my experience tells me Proposition 1 will be defeated. Mail-in election ballots come into the counting center from everywhere at once, so the trend in the count is unlikely to change.

Voters routed conservative causes up and down the ballot, approving the sale of Municipal Light and Power, accepting higher taxes by supporting bonds, and giving Mayor Ethan Berkowitz and his ideas landslide approval.

And the LGBT issue will no longer corrode our community.

It began on Dec. 30, 1975, when the Anchorage Assembly voted unanimously to include sexual orientation as a protected class under the city's equal rights ordinance. The Municipality had just formed from the unification of a county-sized area. All its laws had to be created.

That 1975 Assembly included conservatives. Even Don Smith was a member, one of the most conservative politicians in the city's history. (Smith hasn't won an election since making anti-immigrant comments in 2014. Tuesday he came in third for a school board seat.)

But conservatives in Alaska's early 1970s emphasized liberty more than religion. A live-and-let-live attitude prevailed across the spectrum. Gays told the Assembly about their need for protection and it listened.

A week later, the Christian conservative movement was born in Anchorage, as Rev. Jerry Prevo mobilized his huge Anchorage Baptist Temple congregation to have the ordinance overturned. The victory propelled him to the front of Republican politics. A group he led took formal control of the party a few years later.

For decades after, the Municipality repeatedly convulsed in traumatic debate on equal rights. It tore the community at least four more times. These were the ugliest fights in our history, and Prevo's side won again and again. The power of his movement remade local government.

Now that power is gone. When I talked to Prevo two years ago, he conceded that society had left him behind.

[Why the Rev. Jerry Prevo fought LGBT rights for 40 years]

Jim Minnery, of the Alaska Family Council, took up the issue. But Proposition 1 was a defense on the one-yard line. Minnery's group advanced the narrowest of laws, undercutting the most unpopular minority, in the most uncomfortable setting — bathrooms.

And his side still lost.

Conservatives can complain they were outspent and outorganized, but those factors have become structural in Anchorage's local politics. Complaining about them now is like saying the game isn't fair because the other team has better players and spends more time practicing.

The Alaska Democratic Party has six permanent staff members and a temporary worker, all paid primarily with in-state donations. The Alaska Republican Party has a single paid staffer, the executive assistant to the party's chair.

"In a vote-by-mail environment, he who is most organized has the advantage," said Joelle Hall, operations director for the AFL-CIO in Anchorage.

For Anchorage, a turning point came in 2013, when Mayor Dan Sullivan advanced an anti-union proposal known as AO-37. With a threat to paychecks, unions got more deeply involved and developed new abilities to turn out voters in local elections. They have never left the scene.

Before the campaign, progressive groups contacted their counterparts in other communities that have mail-in elections to learn how to be successful. The month-long election period gives organizations more ability to make sure their allies vote, but that takes the effort of tracking who has voted.

"The data has to be scrubbed every single day," Hall said. "You know they haven't mailed their ballot. You just call them until they do. So it is a process of being really prepared ahead of time."

The quality of candidates also counts, but candidates don't come from nowhere. Political organizers have to recruit them to run for smaller offices, nurturing their careers to advance to higher offices.

Rebecca Logan, who took on Mayor Ethan Berkowitz, had never been elected to anything but a utility co-op board. Many voters formed a first impression of her in February, when KTVA revealed her past of unpaid debts and a drunken driving conviction.

Meanwhile, Logan never gave voters a reason to fire Berkowitz. He has done a good job.

More telling than the mayor's race, in which one candidate never got out of the blocks, were the issues down the ballot. Berkowitz won them all, including an ML&P sale conservatives hoped to use to hurt his reelection chances.

Voters also approved all the bonds, raising their own taxes in the depths of a three-year recession. They even voted for the park bonds.

Park bonds are a barometer. Twenty years ago, even when economic times were strong, they failed time after time. Older, more conservative voters simply saw parks as frills. Now the bonds have become consistent winners.

The demographics of the city have changed. We've become more diverse. A new generation thinks getting around by bicycle is normal and sees nothing controversial about investing in the city's quality of life.

These are deep changes. To reverse their losing streak, conservatives in Anchorage would need a big event or an effective, multi-year strategy.

In state politics, they have a stronger hand. Republicans win legislative races in areas they are not competitive in Assembly elections.

But this fall, we will also have the Trump effect. Women's outrage over the conduct of President Donald Trump has energized many into politics. Classes for progressive women candidates in Alaska have repeatedly filled.

Hall is hopeful. She said, "We run the long game here."