Giving thanks for sacrifice on Memorial Day 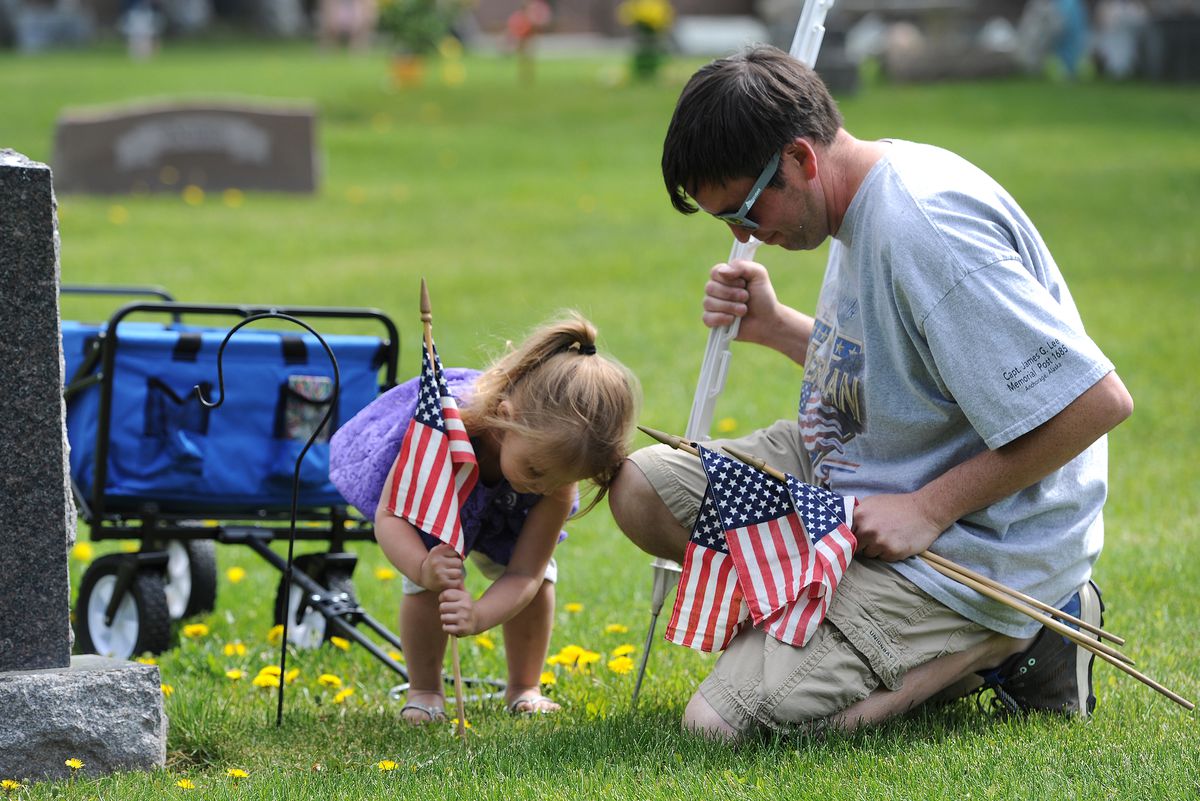 Two-year-old Dallas Pfouts and Danny Garcia, along with volunteers from the Veterans of Foreign Wars Post 1685 in Spenard, placed American flags at the graves of veterans resting in the Anchorage Memorial Park Cemetery on Sunday, May 29, 2016, in honor of Memorial Day. (Bill Roth / ADN)

Two-year-old Dallas Pfouts and Danny Garcia, along with volunteers from the Veterans of Foreign Wars Post 1685 in Spenard, placed American flags at the graves of veterans resting in the Anchorage Memorial Park Cemetery on Sunday, May 29, 2016, in honor of Memorial Day. (Bill Roth / ADN)

It didn't seem to matter that the class was held from 6 p.m. until 9 p.m. on Thursday nights. Normally I avoided rooms with buzzing fluorescent lights and no windows. The University of Alaska Fairbanks had a policy allowing senior citizens free auditing privileges. There were veterans for every war during my lifetime and the 50 years before listening and learning from Terrence Cole, a spry and animated professor. He taught history and I took at least one of his classes every semester.

"Considering 60 million people were killed during World War II, American troop casualties were relatively low," he said and turned back to his overhead projection. He often used political cartoons to show more accuracy in the opinions of the days than what had made it into history books.

"Excuse me, Dr. Cole," Melinda, a teacher in her fifties, softly interrupted. "It may have been low, but one of them was my dad, and that was everyone at our house."

Cole stopped and looked at her. She was on the front row and always on time. Well, I assume she was the times I wasn't. "I'm sorry." He went on to explain that so much of studying history is comparative to other events, events that when you're in the middle of you don't see the others. How so much of our history is explained in the context of the collective — and not what the individual losses are. He mused that maybe if we were capable of understanding all that loss, we wouldn't have had so many wars.

Decoration Day was first recognized a few years after the Civil War. Two percent of the population had been buried. It's hard to imagine the individual loss. If it happened with the U.S. population what it is today, it would be 6.5 million dead. Flowers and flags were placed on the graves of so many Americans. There was a proclamation made by John Logan, a general in the Union Army, that the observance "is held to honor those who died in defense of their country during the late rebellion."

"What can aid more to assure this result than by cherishing tenderly the memory of our heroic dead, who made their breasts a barricade between our country and its foe? Their soldier lives were the reveille of freedom to a race in chains, and their death a tattoo of rebellious tyranny in arms. We should guard their graves with sacred vigilance. All that the consecrated wealth and taste of the Nation can add to their adornment and security is but a fitting tribute to the memory of her slain defenders. Let no wanton foot tread rudely on such hallowed grounds. Let pleasant paths invite the coming and going of reverent visitors and found mourners. Let no vandalism of avarice of neglect, no ravages of time, testify to the present or to the coming generations that we have forgotten, as a people, the cost of free and undivided republic."

Decoration Day was recognized solely about the fallen Civil War soldiers until after the First World War. Now it's a catch-all for the tally of so many wars and conflicts. We still see Confederate flags on bumper stickers. War battle reenactments seem romantic with dapper uniforms and hoop-skirted Southern belles. They still make promises that the South will rise again. A civil war — or to more appropriately, a lack of civility war — is waged on social media and on radio talk shows. The cost of wars is lost on us, including the ones we are currently in or threatening to start. We'd rather fight about who stands for a flag or anthem than realize how many people died under those colors protecting our right to stand or kneel. False patriotism dishonors sacrifice.

Terrence Cole gave his final lecture this week. I thank him for bringing the past to focus and creating a thirst to understand the path we step out of every day.