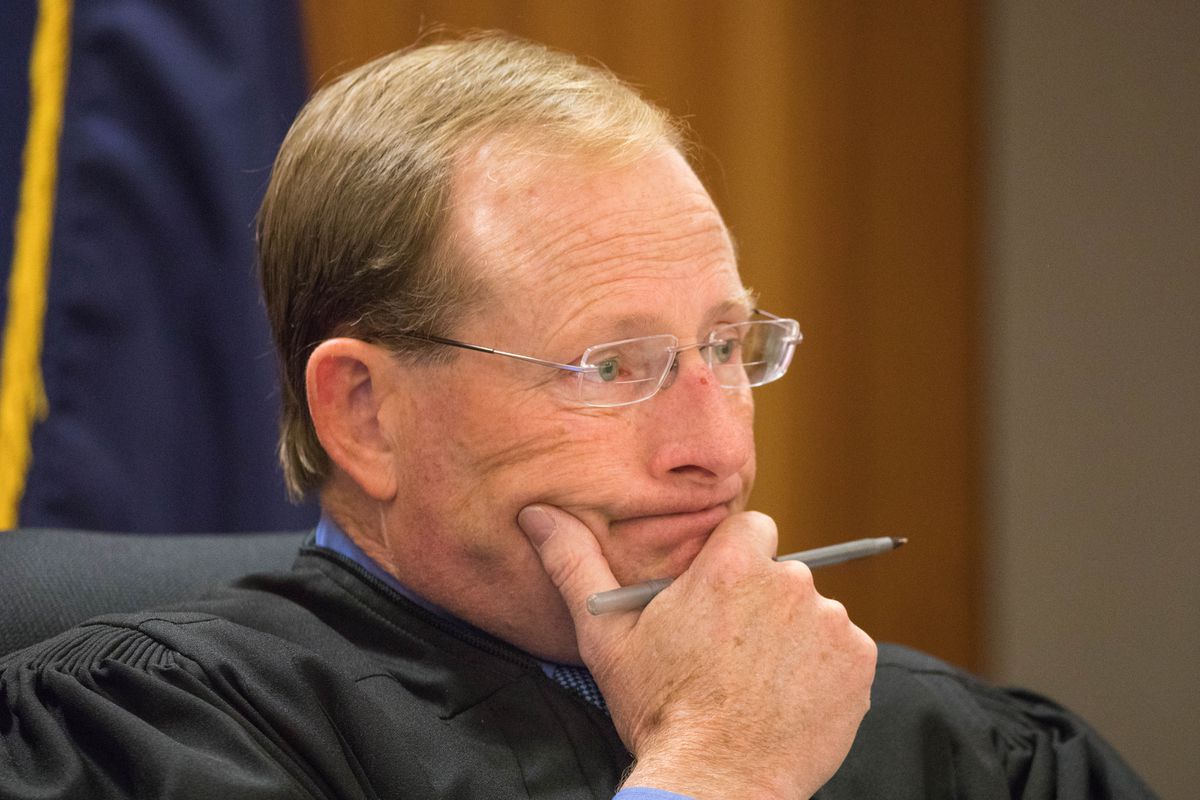 Superior court judge Michael Corey listens to arguments during a change of plea and sentencing hearing for Jack Dalton Wednesday, Sept. 27, 2017 at the Nesbett Courthouse in Anchorage. Dalton is a renowned Alaska Native storyteller who last year was charged with sexual abuse of a minor. (Loren Holmes / Alaska Dispatch News)

Superior court judge Michael Corey listens to arguments during a change of plea and sentencing hearing for Jack Dalton Wednesday, Sept. 27, 2017 at the Nesbett Courthouse in Anchorage. Dalton is a renowned Alaska Native storyteller who last year was charged with sexual abuse of a minor. (Loren Holmes / Alaska Dispatch News)

Recent attacks against Judge Michael Corey portray his decision in the assault case of Justin Schneider as uncaring toward the victim — a young Alaska Native woman — and callous toward the impact of sexual assault. Some are urging us to vote against the judge's retention on Nov. 6, based on his willingness to accept a plea deal that allowed Schneider to engage in sexual offender treatment under house arrest in lieu of a jail sentence. They decry the emphasis placed on Schneider's rehabilitation as an affront to the victim's pain.

As a longtime Alaskan woman lawyer, I understand the outrage over the longstanding sexual assault crisis in our state. Alaskans are three times more likely to be victims of sexual assault than residents of other states, and our children are six times more likely to suffer the trauma of sexual abuse. Alaska Native women are especially vulnerable, with rates of sexual assault 10 times greater than those of their fellow Alaskans. These statistics are as unacceptable to me as they are to anyone. Yet to me, those who focus their ire on Judge Corey overlook not only the magnitude and complexity of our crisis, but the truly unique circumstances of the Schneider case and the benefit of what the prosecutor — and the judge — were seeking to achieve.

Second, Schneider's response to his crime was itself unusual, and was key to the plea deal that was offered. He never challenged the victim's story, but instead entered therapy and expressed empathy for the victim. He directed his attorney not to raise defenses that might have been offered on his behalf. (Despite compelling evidence, it was not an open-and-shut case — a different defendant could have argued, as many rapists do, that the victim lied and the encounter was consensual.)

This step of taking responsibility is rare in sexual assault cases. As the #MeToo movement and recent U.S. Supreme Court hearings painfully demonstrate, perpetrators' denials underlie much of the lingering pain victims suffer. And the understandable reluctance to enter a "he said, she said" battle intimidates many from coming forward.

Third, securing sexual offender treatment for a perpetrator who cannot be convicted of a sex crime is perhaps the most unusual — and remarkable — aspect of this case. The statutory sentencing structure governing Schneider's crimes made a short jail sentence the most likely option. Jail, we are urged to assume, is the best way to make a criminal face the harm of his actions. But in this case, it was not unreasonable to decide that a jail sentence was not the best outcome, given the limited options the prosecutor and judge had at their disposal and the perpetrator's willingness to agree to treatment. Therapeutic court programs in Alaska have been successful for nearly two decades in steering offenders into treatment in lieu of jail, and have shown that effective treatment can reduce the likelihood their crimes will reoccur.

In the campaign against Judge Corey, the apparent dismissal of the importance of treatment concerns me the most. To hear his opponents speak of it, this aspect of the plea deal was a mere slap on the hand for Schneider. Yet most offenders — and many criminal justice professionals — recognize that engaging sincerely in treatment to confront the harm one has caused is much more difficult than sitting in a jail cell. Holding a mirror up to one's most horrifying and disgusting behaviors — and owning them fully — is a process most offenders refuse to engage.

It makes me hopeful to see people stand up for Alaska's victims of sexual assault. But the sad fact is that the perpetrators are Alaskans, too. Most often, they are people we know: our fathers, stepfathers, uncles, brothers, friends, intimate partners, authority figures and acquaintances. In a small minority of cases, they are strangers like Schneider. Whether we know them or not, they live among us, and even if arrested, convicted and sent to jail, they will return to our communities. Whether they return unchanged or engaged in rehabilitation matters a lot to me, and should matter to all of us.

When I reviewed the transcript of the Schneider hearing, I did not hear a judge who was insensitive to our history. I did not hear a judge who disregarded the victim's pain or minimized the damage of sexual assault. To the contrary, I heard a judge who was very mindful of the gravity of Schneider's offense, but who was also willing to allow some good to come of an awful but unusual situation where ideal options did not exist. By using what authority he had to compel Schneider to remain in treatment, Judge Corey chose the path of restorative justice — a path that to me holds more promise for addressing the root causes and complexities of our sexual assault crisis than rage and finger-pointing. Whether one agrees or disagrees with Judge Corey's actions, they were those of a careful jurist doing what jurists are supposed to do: make fair decisions based on the facts and laws of each case, however messy or imperfect they may be. I support Judge Corey's retention and plan to vote yes on Nov. 6. I urge you to do so, too.

Barbara Hood is a retired lawyer. She lives in Anchorage.