Death of a retailer: Alaskans’ love affair with brick-and-mortar commerce 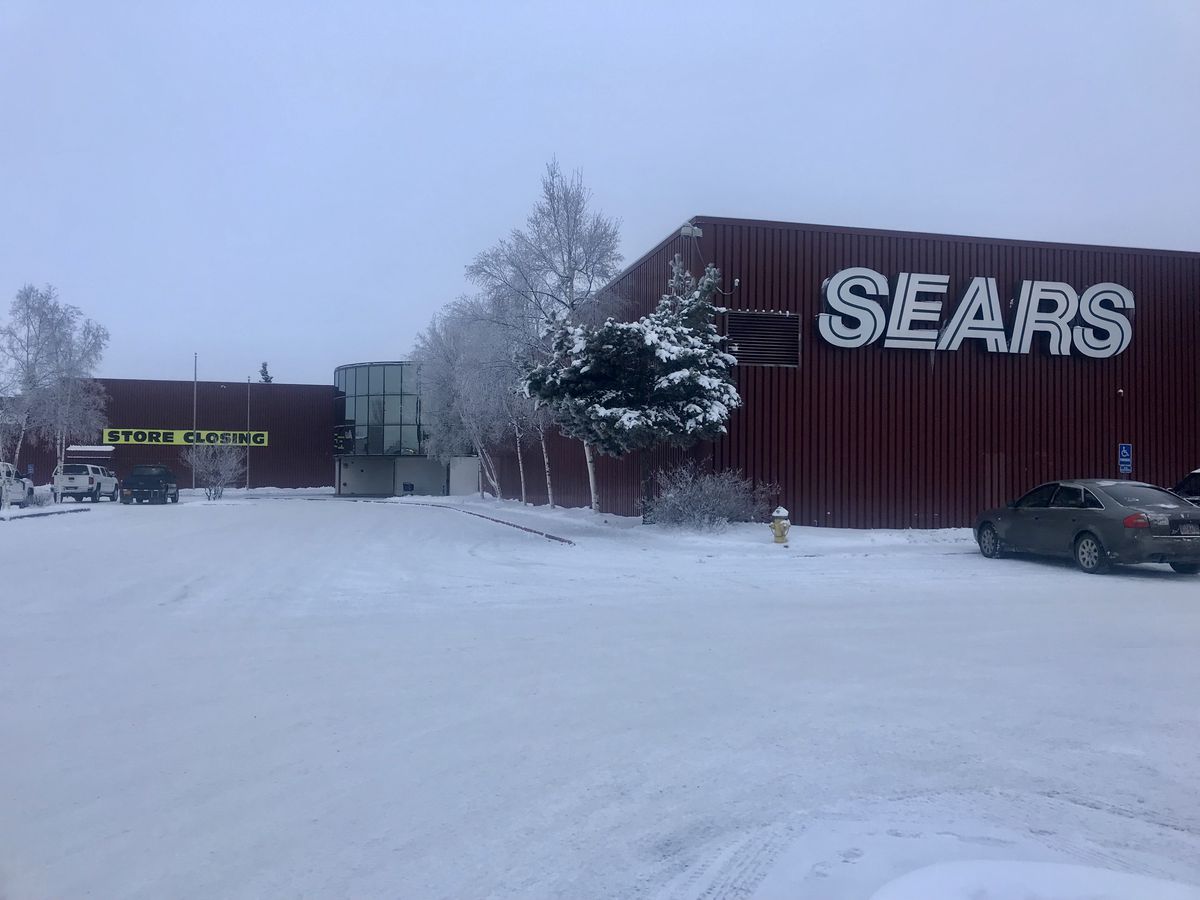 The Fairbanks Sears store on Nov. 21, 2018. On Nov. 8, Sears announced it would be closing dozens of stores across the U.S., including its Fairbanks location. (Mary Coote photo)

The Fairbanks Sears store on Nov. 21, 2018. On Nov. 8, Sears announced it would be closing dozens of stores across the U.S., including its Fairbanks location. (Mary Coote photo)

You can’t dodge bullets forever. When yet another list of Sears locations closing nationwide came out earlier this month, it finally contained the Fairbanks location, which some of us who grew up in the Interior were beginning to think would outlast the heat death of the universe. And although the primary reaction to the news was surprise that it hadn’t happened earlier, given the abundant omens — the closure of the Anchorage store in April, the perennially empty parking lot — there was a twinge of sadness as well.

The building Sears occupies in Fairbanks was built as a one-stop entertainment destination known as The Center. It had a movie theater, a diner, a roller rink, a bowling alley, an arcade, a live music venue and other diversions. It cost $20 million in 1985, and Fairbanksans loved it. It was the hub that everyone in town wanted — a hangout spot for college kids, a birthday party destination for families. One of my first memories is as a toddler at the diner, standing up in my chair to look at a girl in the next booth and falling on my head on the tile floor.

But from the outset, Fairbanks couldn’t support it. There were revenue questions less than a year in — and then the bottom fell out of the oil market. What followed were the darkest years for Fairbanks in my lifetime. Downtown collapsed, including Fairbanks' most cherished clothing store, Nordstrom. And The Center was done.

There were real questions about what the town’s future was going to be. I was too young to understand at the time, but it was an existential crisis. And the failure of The Center seemed like a canary in the coal mine, that maybe we just couldn’t make a go of it anymore.

And then Sears came. It wasn’t quite like Costco stepping up after Sam’s Club left, but it was pretty close. We didn’t have The Center anymore, but Sears had good tools and appliances and dress clothes and an auto department. And upstairs was Ziggy’s, a fancy hair salon. My family didn’t have much money, but my mom and sisters made a point of getting their hair cut at Ziggy’s. I came along and read comic books. Their employee soda machine, which they let me use, had crushed ice.

For about 20 years, Sears was the mainstay store in Fairbanks of any size selling dress clothes, even as others, such as J.C. Penney, Lamonts and Gottschalks came and went. I wore slacks from a surprisingly early age (middle school, maybe earlier — yes, I was teased quite a bit), and Sears was the only place to buy them. Sears is still the only major retailer that sells a variety of suits in town. But e-commerce, specialty shops and trips to Anchorage — and the fact that it’s Fairbanks, and people don’t wear suits much — make that not a huge sales driver anymore.

On Tuesday, Fairbanks celebrated the arrival of its first Costco, and Interior residents packed into the wholesaler with all the fervor of a Black Friday crowd. Costco’s CEO had come to town for the event, and Fairbanksans stole a few selfies with him. Restaurant and business purchasers, forced to choose higher-cost options when Sam’s Club closed in January, breathed a sigh of relief. In a gesture of goodwill and savvy community-building, the store donated hundreds of pumpkin pies to the Fairbanks Community Food Bank for Thanksgiving.

We have a unique relationship with brick-and-mortar stores here in Alaska. Although the online shopping revolution has offered a sea change in the variety of products we’re able to have shipped to us, there’s still something about the presence of a physical store that we appreciate on a deep level. We’re all too aware of the tenuous nature of our connection to the world at large, and how fragile that supply chain can be — how little disruption it takes to cut us off from not just tchotchkes and disposable goods, but also food and essential commodities. Viewed through that lens, every time a company announces a location here, it feels like a bet on our success and a recognition of our connection to the world Outside. And although we’re fiercely independent and plenty happy to not bother paying attention to how they do things Outside, in the depths of a cold, dark winter, there’s something reassuring about knowing greater forces, from Outside or no, have made the same bet we have by staying here.

And that, in the end, is why those of us who got to see the whole arc of the Fairbanks Sears store’s tenure are feeling a little conflicted to see it go. Before it was a store we felt like we didn’t need, it was a store we desperately did.

Tom Hewitt, born and raised in Fairbanks, is the ADN’s opinion editor.