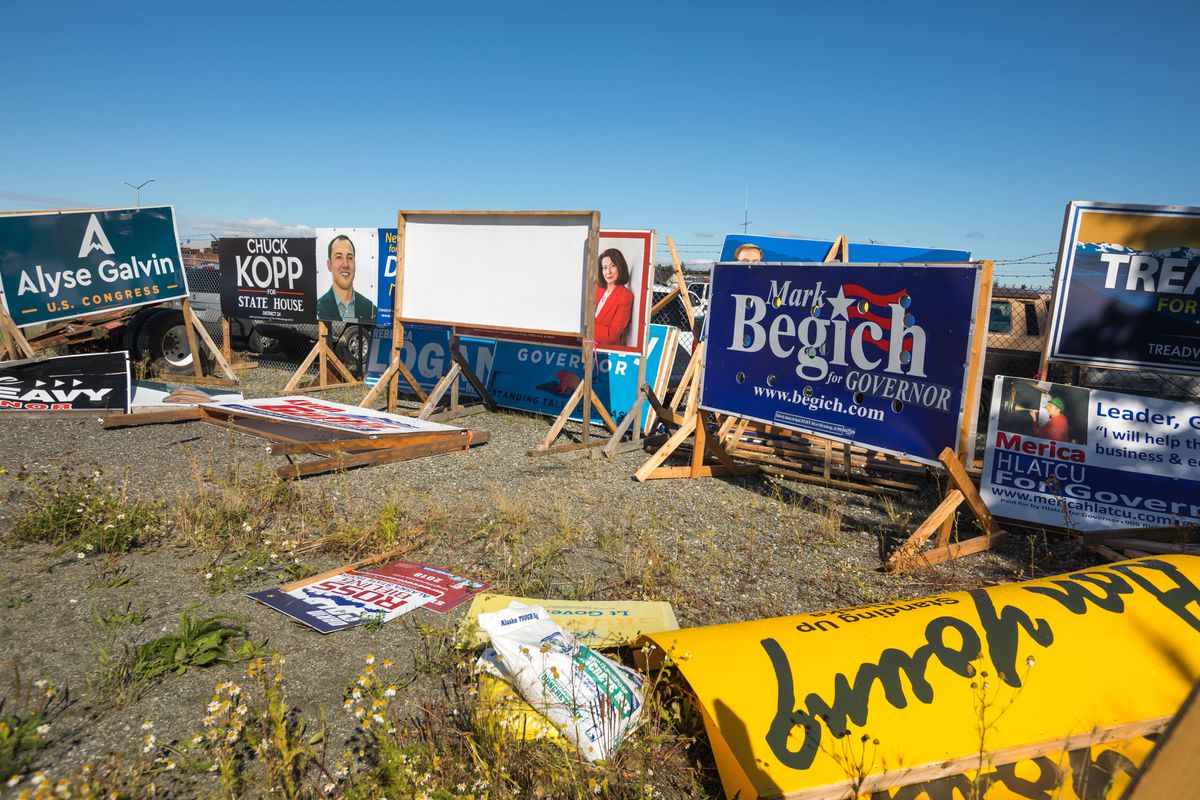 Political signs that were removed by the Alaska Department of Transportation sit in a DOT complex in Anchorage on Thursday, Aug. 9, 2018. (Loren Holmes / ADN)

Political signs that were removed by the Alaska Department of Transportation sit in a DOT complex in Anchorage on Thursday, Aug. 9, 2018. (Loren Holmes / ADN)

We are longtime Alaskans. We’ve not been major donors to any political campaign ourselves but, with some alarm, we watched the deluge of political ads in the run-up to the November elections and could see that millions upon millions of dollars were spent in an attempt to influence the electoral outcome. We are afraid that a consequence of all that money being in play is that politicians, whatever their party, have incentive to be more responsive to the needs of their biggest donors than to the public at large.

With each electoral cycle, there seems to be a greater influx of money, primarily from a few wealthy donors supporting favored candidates. What gives? And what can be done about it? Now that the 2018 election is over, we wanted you to know of our challenge to the administration of campaign finance laws by the Alaska Public Offices Commission (APOC). Ours is a nonpartisan effort to require that APOC enforce a law, adopted by Alaska’s voters 12 years ago, stating that the maximum amount an individual may give a candidate or group is $500.

If you want to blame the U.S. Supreme Court case Citizens United for all this money swirling around political campaigns, you’re moving in the right direction. That 2010 decision made it harder for states to regulate donations, but it didn’t make it impossible. In 2012, APOC created a loophole in the election law when it decided to no longer enforce the $500 per person limit on donations to supposedly “independent” political groups. That APOC decision, which was never ordered by a court, opened the way for individuals to give unlimited amounts to these “independent” groups, which have come to be called super PACs. In other words, with a stroke of the pen, APOC wiped the $500 per person donation limit from state law, even though it was established by Alaska voters.

Here’s an example of how this loophole permits so much money to flood into our politics. Our new Gov. Mike Dunleavy’s official campaign was called Alaskans for Dunleavy, and individual donations were duly restricted to $500. But there was also a super PAC supporting Dunleavy, called Dunleavy for Alaska. This group was technically independent from the official campaign, so it was allowed to accept donations in unlimited amounts. It raised far more money than the official campaign -- in fact, more than $700,000 came from just two individuals, including the candidate’s brother in Texas. These massive donations to the super PAC were used to buy ads and otherwise promote Dunleavy’s candidacy in a way that was virtually indistinguishable from the efforts of the official campaign. In our view this conduct undermines the state law, the intent of which was to limit overall donations to campaigns.

When we found out about this loophole, we felt compelled to act. We joined with leading election law experts and we each filed a legal complaint requesting that APOC close the loophole. APOC declined our request, but we’re now in state court, and we plan to take our case as far as we can, including to the U.S. Supreme Court, if necessary.

Our argument is simple. Politicians who are dependent for campaign funding on just a small group of wealthy individuals are not the sort the framers of the U.S. Constitution envisioned. To the contrary: as Alexander Hamilton wrote in the Federalist Papers, Americans sought their independence more than two centuries ago to form a government “dependent on the people alone,” not on special interests. By that measure, the contribution limits should stay on the books and the loophole should be closed.

We recently had a hearing in Anchorage where a Pulitzer Prize-winning historian gave expert testimony about the framers’ understanding of “corruption.” He told the court that the framers wanted to create a system where politicians were not dependent on “aristocratic favor” like in the English system that they rebelled against. In order to make sure that the wealthy few do not distort the system at the expense of the many, we need to reinstate some reasonable limits on all forms of campaign contributions.

The court has yet to issue a decision in our case, but we feel encouraged after the compelling testimony given in Anchorage. The framers could not have dreamed that the American experiment would eventually reach as far as Alaska. But thankfully, it has. Alaska now has an opportunity to enforce the wisdom the framers gave us to ensure that our politicians truly represent all Alaskans, not just the wealthy few.

Jim Barnett is an Alaska attorney, historian and a former member of the Anchorage Assembly.

Donna Patrick is a nurse practitioner in Fairbanks.

Pat Lambert is a retired math professor in Fairbanks.