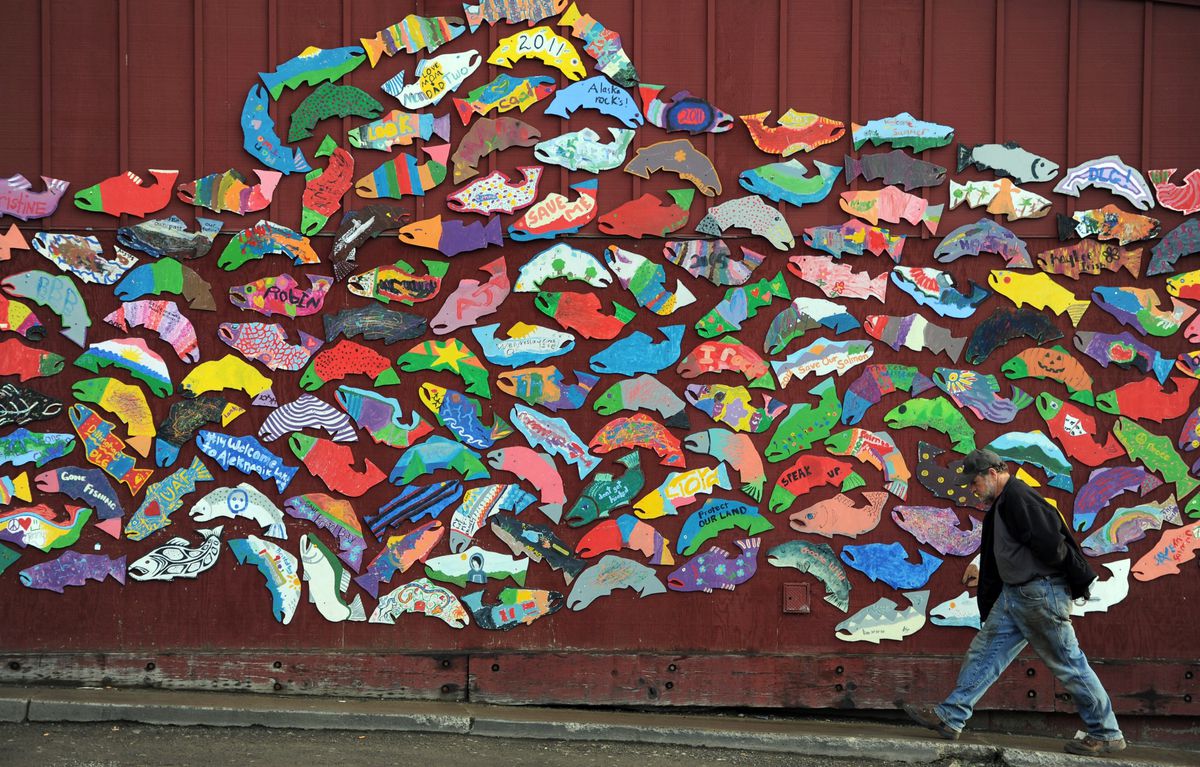 Gary Baker, a commercial fisherman for 30 years on the Naknek side of Bristol Bay, walks past a salmon mural on a store in Dillingham, Alaska, on Monday, August 26, 2013. Baker is concerned if something goes wrong with the Pebble Mine. (Bill Roth/Anchorage Daily News/MCT)

Gary Baker, a commercial fisherman for 30 years on the Naknek side of Bristol Bay, walks past a salmon mural on a store in Dillingham, Alaska, on Monday, August 26, 2013. Baker is concerned if something goes wrong with the Pebble Mine. (Bill Roth/Anchorage Daily News/MCT)

The most important document on the Pebble Project’s path to a key permit to mine the headwaters of Bristol Bay has been released by the Army Corps of Engineers and utterly fails the people of Alaska.

That document, the draft environmental impact statement, is often considered the linchpin of permitting because it should outline the risks and options for safely advancing or altering a project. However, in this document, the Corps blatantly ignored risks and Alaskan concerns, seemingly content to push forward a mine that Alaskans have said time and again we don’t want.

Pebble’s draft EIS fails to meet basic standards of scientific rigor in a region that demands the opposite. There are myriad ways to back this up, but here is what rises to the top for us.

First, Pebble has put forth a massive proposal that covers only a fraction of the ore in the ground. The Corps has allowed this stunt and as such, the draft EIS ignores Pebble’s planned expansion. Proof of the doublespeak by Pebble is ample, but most recently played out over the course of just one week. First, Pebble’s CEO claimed in the Anchorage Daily News that the mine would have a “smaller footprint.” However, that Wednesday at a mining conference, the CEO of Northern Dynasty Minerals, the sole company behind the Pebble Partnership, was asked if Pebble would expand the scope of the project after securing this permit. The CEO responded, “that’s the whole purpose, is to gain your social license to operate...”

Still, the shoddy draft EIS doesn’t hide the massive impacts Pebble would have even without expansion. Pebble’s initial plan would permanently destroy nearly 4,000 acres of wetlands and more than 80 miles of streams in their 14-square-mile footprint. Destruction of rivers and wetlands on such a massive scale in a region famous for its salmon and trout will be devastating. Additionally, Pebble would alter the flow of rivers important for salmon, trout and recreation, and require carefully treating massive amounts of water on a scale so colossal it has never been done before. Pebble’s proposal would fundamentally upend the character and productive landscape that local people, commercial fishermen and businesses like ours depend upon for our livelihoods.

The draft EIS also fails to address questions about Pebble’s proposal and concerns of thousands of Alaskans. Leading up to the draft EIS release, the Corps highlighted more than 160 instances in which Pebble failed to provide adequate information on specifics of its operation and the draft EIS admits that Pebble’s proposal lacks detailed engineering analysis. Typically, lacking information like this results in a halted application, and a draft EIS is not released for public review until answers are received. In Pebble’s case, however, the Corps chose to ignore those standards, advancing the application and issuing a draft EIS anyway.

Then there’s the issue of the possibility for a catastrophic failure at the proposed tailings facility, which must safely hold the contaminated mining waste without accident, forever. We’re sure that planning documents for the failed Mt. Polley mine facility, which broke and released billions of gallons of wastewater into the Fraser River system, likely also said such chances were minimal. However, human error is universal, and to both ignore that and fail to plan for it is unacceptable.

The Corps is asking those of us who rely on the region to accept insufficient science and take Collier’s word, when he has a $12.5 million personal bonus on the line if the project advances quickly. We should not be asked to risk the most productive fishery on earth based on unsubstantiated claims from a company that has a history of false promises. Yet here we are.

We urge Sens. Lisa Murkowski and Dan Sullivan, Congressman Don Young and Gov. Mike Dunleavy to stand up and do what is right for Alaskans, not a mining company that continues to evade the truth.

To our fellow Alaskans, please don’t be duped by Pebble’s supposedly scaled-back plan. The draft EIS, even in its current state, makes it crystal clear that the massive, phase-one Pebble mine, and expansion and additional mines that would follow, would cause wide-spread, irreversible harm to the salmon, communities and businesses of Bristol Bay, and taint Alaska’s development reputation in the process.

Northern Dynasty’s statements to Outside industry contacts prove the current plan is simply a ploy, one regularly used by large conglomerates, to hoodwink locals and gain access. The initial expense of establishing infrastructure within Bristol Bay requires the mine to grow until the last ounce of gold and copper is extracted. The Corps seems content to let them advance this false claim and not properly analyze the full risk to our world-class region, but we aren’t. We hope our elected decision makers won’t allow Alaskans to be put at risk by this ploy, either.