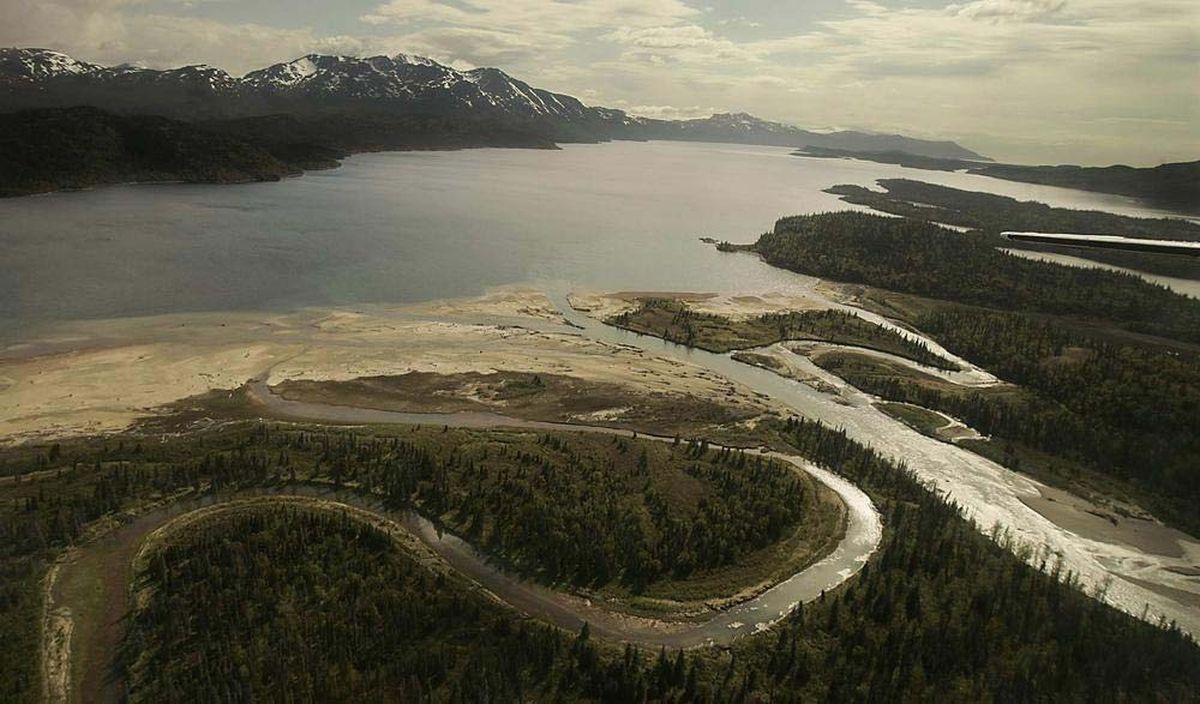 The Pile River flows into Lake Iliamna, nursery of many sockeye salmon, in the Bristol Bay region of Alaska. The Pebble Mine would sit just above the lake. (Luis Sinco/Los Angeles Times/MCT)

The Pile River flows into Lake Iliamna, nursery of many sockeye salmon, in the Bristol Bay region of Alaska. The Pebble Mine would sit just above the lake. (Luis Sinco/Los Angeles Times/MCT)

The Alaska Peninsula Corporation (APC) is the merged Alaska Native Claims Settlement Act village corporation for the Bristol Bay communities of South Naknek, Newhalen, Port Heiden, Ugashik and Kokhanok. Recently, ADN ran an opinion piece from APC CEO Dave McAlister regarding the proposed Pebble Mine, a project he believes can save the communities around Lake Iliamna from economic demise. I am an APC shareholder. I live in Igiugig, one of those wonderful Lake Iliamna communities, and I disagree. I believe Pebble’s construction and operation will bring more destruction than benefits to our homes. I also believe a majority of APC shareholders share my opinion and have grave concerns about the access agreement APC recently signed with the Pebble Limited Partnership.

Like many APC shareholders, I want to see the corporation succeed. I have positive relationships with many people involved with the organization and always work to share criticisms constructively when concerns arise. But I have also been consistently disappointed by the conduct of APC as it relates to this issue. Of no small concern to me is the fact that at least one current APC board member has, over the years, received direct payments from Pebble and has a clear conflict of interest, the details of which has never been fully disclosed to shareholders. The corporation also did not seek out shareholders’ opinions before entering into an access agreement with Pebble last November and has shared very little information about the agreement since that time.

We deserve more. It is time we demand that our management and directors operate more transparently. Moreover, it is time for APC to live up to its mission to “preserve and enhance the quality of life of Alaska Peninsula Corporation shareholders and to protect our culture while managing our assets in a manner which enhances their value.” The corporation’s agreement with Pebble is in direct contradiction to its mission.

To be clear, APC could have taken a different approach when faced with the question of whether to enter into an access agreement for the Pebble project. On the northeast side of Lake Iliamna, Pedro Bay Corporation has stood firm in its opposition to Pebble Mine. Rather than using the tired excuse of wanting to be a part of the process while remaining “neutral” on Pebble Mine, PBC recognizes that the mine, in any feasible configuration, is simply not worth the risk to its lands, its people and its waters. For more than a decade, Bristol Bay Native Corporation has taken a similar stance in opposition to the project and has based its decision on surveys and direct consultation with shareholders.

Their opposition reflects the views of their shareholders and is firmly grounded in a commitment to protecting our fish and Native way of life. Why would APC lend an air of credibility to a project that would threaten both, while benefiting a foreign mining company more than our own communities and people? Why would APC make a land use agreement with PLP for the most controversial project in our recent history without consulting with the shareholders that they are obligated to represent?

Mr. McAlister is correct about one thing. The people who live in the villages around Lake Iliamna do need jobs and economic opportunity. But he is wrong in his belief that Pebble is the only path forward. If APC’s leadership truly wants to solve these very real economic problems, it should work with its shareholders on consensus-based solutions that do not threaten the Bristol Bay fishery or run counter to our traditional values. We should not be pursuing development opportunities that put Bristol Bay’s fisheries at risk. Pebble is the riskiest of all projects and within a span of just 20 years, would leave us with a lake of poison that will exist until the end of time. Igiugig is the first village downstream from the proposed mine, and we thrive from our lands and waters. It is a sickening feeling to imagine a future in which there exists the chance that those dams will fail and poison the life that literally runs through our veins.

Pebble will put at risk all that we hold dear; it will jeopardize the very things that make shareholders want to stay in their ancestral lands. That’s why I, along with many other APC shareholders, am simply not willing to trade salmon for gold.

Christina Salmon-Bringhurst was raised in the village of Igiugig. She is the eldest daughter of Dan and Julia Salmon. She attended the University of Alaska Anchorage, studying journalism. She is the current Manager of Iliaska Environmental, LLC. She also serves as a member of the Igiugig Village Council, Igiugig Native Corporation and is an Assembly member for the Lake and Peninsula Borough.