The University of Alaska may be strong. But UAF, UAA and UAS are stronger. 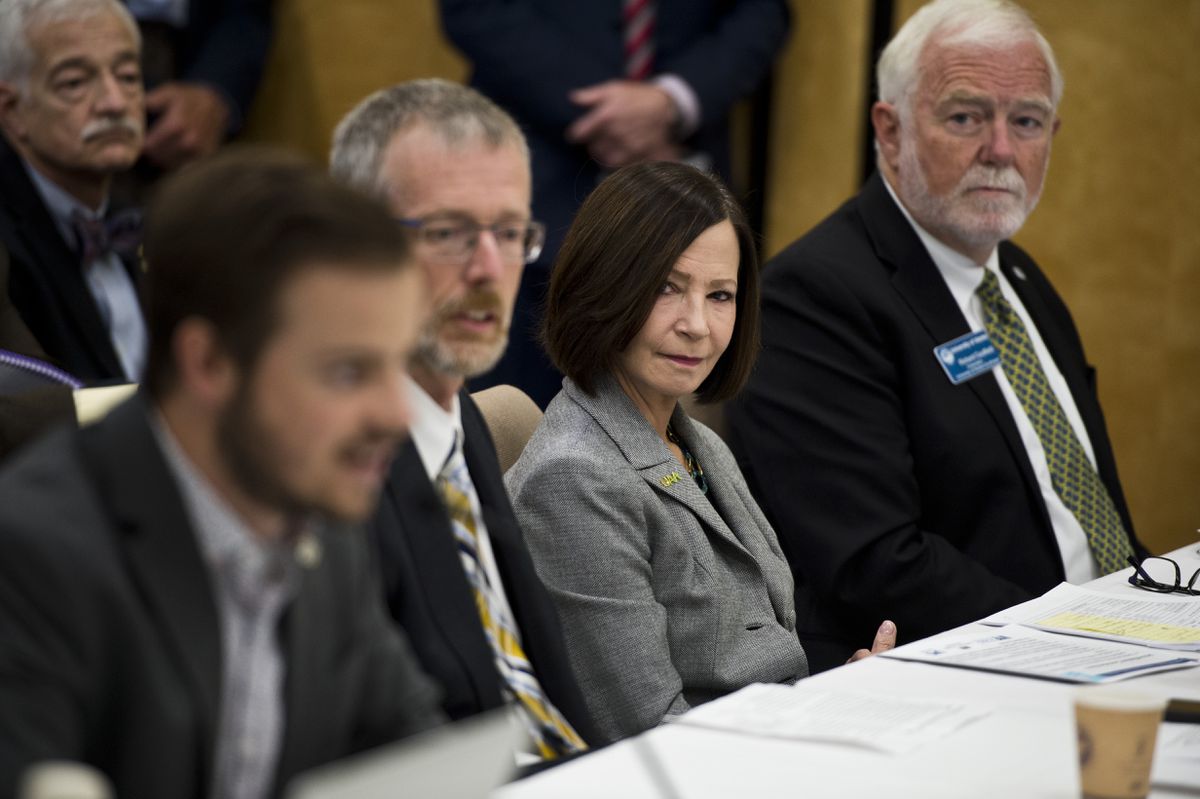 University of Alaska Anchorage Chancellor Cathy Sandeen, second from right, listens as student representative Alex Jorgensen speaks. The University of Alaska Board of Regents met at UAA to discuss restructuring the university in the face of budget cuts on July 30, 2019. (Marc Lester / ADN)

University of Alaska Anchorage Chancellor Cathy Sandeen, second from right, listens as student representative Alex Jorgensen speaks. The University of Alaska Board of Regents met at UAA to discuss restructuring the university in the face of budget cuts on July 30, 2019. (Marc Lester / ADN)

While hardly ideal, Gov. Mike Dunleavy’s announcement that his proposed cuts to higher education in Alaska will be reduced to $70 million spaced over three years brings a much-needed note of clarity and predictability to this endless summer of exquisite torture. The restoration of $65 million is certainly useful, but the most precious gift the governor’s decision provides is time. This time is needed not just to manage the impending cuts, but also to permit a proper, thorough, fact-based discussion on just how higher education in Alaska should be reformed.

In the pressure cooker of the fiscal crisis, only one person was officially authorized to speak for the university. In many ways, President Johnsen became its public face. Certainly, no vision other than his was allowed to receive serious consideration or be deemed worthy of discussion. This is rather curious, given that the organization Johnsen heads, UA Statewide, is not a university. It is a purely administrative organization which has no accreditation, teaches no students and conducts no research. While he alone was permitted to articulate the future of higher education in Alaska, the people who actually provide it, administration, faculty, staff and students at UAF, UAA and UAS, were silenced. Their doubts about the wisdom or feasibility of the “new UA” concept were ignored.

This is not acceptable. Moving forward with consolidation will not be quick, it will not be cheap and it threatens to undermine the accreditation of the entire system. Anyone who worked at UAA immediately after the merger can also tell you that the “shotgun wedding” of diverse institutions is wrenching and traumatic. More unforgivable is the fact that there is little evidence to suggest that a consolidated “new UA” would cost less, and much evidence to suggest it would deliver significantly less value to the state.

The governor’s gift of time allows us to make slow haste and proceed with deliberate speed on a course toward reform for higher education in Alaska based on evidence, solid planning and a thorough knowledge of the foundation upon which a reformed system can be built. That new system should begin with the three institutions that have actually been delivering higher education in Alaska for more than 30 years.

UAF, UAA and UAS are rooted in their local communities and responsive to their needs. Chancellors Dan White, Cathy Sandeen and Rick Caufield can use their intimate knowledge of their own institutions to manage the reductions with minimal disruption. By acting as a consortium, the three institutions can maintain the unique cultures, services and specialties they have developed to serve the communities where they are based while achieving significant cost savings.

At their next meeting, the Board of Regents should rescind the declaration of financial exigency and commission a new task force, with broad representation from all three campuses, to consider all options for the reform of higher education in Alaska. Such a precious gift of time must not be squandered. It is the responsibility of all of us devoted to providing Alaskans access to quality higher education to ensure we have a well considered, realistic, evidence-based plan to proceed with plentiful input from those at the sharp end who will have to make it a reality.