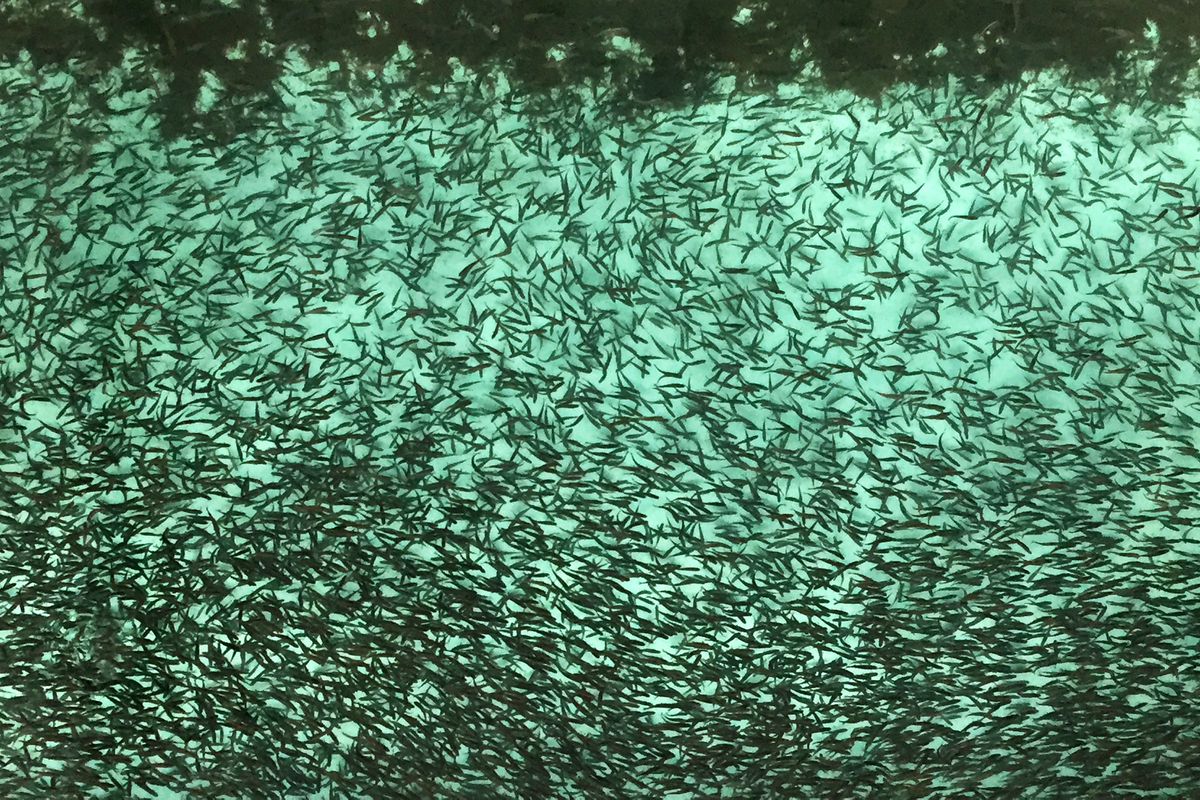 Salmon fry schooling up indoors are viewed from above their tank during a tour of the Macaulay Salmon Hatchery on Tuesday, August 15, 2017, in Juneau. Douglas Island Pink & Chum, Inc. (DIPAC) currently rears and releases chum, chinook, coho and sockeye salmon. Brief tours, exhibits, aquariums, a touch tank and a viewing window in the fish ladder are offered to visitors. (Erik Hill / ADN)

Salmon fry schooling up indoors are viewed from above their tank during a tour of the Macaulay Salmon Hatchery on Tuesday, August 15, 2017, in Juneau. Douglas Island Pink & Chum, Inc. (DIPAC) currently rears and releases chum, chinook, coho and sockeye salmon. Brief tours, exhibits, aquariums, a touch tank and a viewing window in the fish ladder are offered to visitors. (Erik Hill / ADN)

In the early 1970s, Alaska’s salmon harvests were at an all-time low. Annual statewide harvests for all salmon species were down to nearly 20 million fish. As all Alaskans trying to fish for their business or sport or to fill a freezer at that time know, the lack of reliable harvests resulted in deep and painful impacts in our state and communities. Selective openings and even complete fishery closures failed to reverse the decline. So, too, did efforts to stop foreign vessels from fishing in state waters. It was a time, as the Fairbanks Daily News-Miner observed in 1970, “dominated by tragedy, disaster, intrigue and double-dealing.”

Undaunted, Alaskans banded together to overhaul state fisheries. In 1969, the Alaska Department of Fish and Game started a rehabilitation program to build fish ladders, stock lakes with smolt, and remove log jams and other obstacles from salmon-producing streams. In 1973, voters amended the state constitution’s “no exclusive right of fishery” clause, putting into place limited-entry and hatchery production. And in 1976, Alaska’s congressional delegation helped pass the Magnuson-Stevens Act, which established a federally managed exclusive economic zone up to 200 miles offshore.

To protect wild salmon stocks from overfishing and to support the sport, subsistence and commercial users whose livelihoods depended on the salmon fishery, the Alaska Legislature expanded the hatchery program. Starting in 1974, Fish and Game enabled legislation providing authority for private non-profit, or PNP, hatcheries to operate and to harvest salmon for brood stock and cost recovery. By 1977, the first hatchery fish had returned from the ocean, relieving harvest pressure on wild stocks.

More than 40 years later, Alaska’s 25 PNP hatchery sites, many of them former Fish and Game facilities now managed by hatchery associations, continue to enhance the annual harvests of all five species of wild Pacific salmon. The numbers clearly demonstrate the ways in which the hatchery program’s mission is effectively working to relieve pressure on wild stocks and enhance opportunity for all users. From 1975-2018, annual harvests averaged 75 million wild salmon, compared to 40 million wild salmon from 1910-1973, before the hatchery program was put in place. When hatchery-born fish are included in these figures, the 1975-2018 average annual harvest almost doubles to 148 million fish. On average, 25% of Alaska’s salmon harvest originates from Alaska’s hatchery program, although it varies greatly by region and species.

The PNP hatcheries work closely with state regulators and biologists to limit any impacts hatchery-born fish might have on wild stocks. Hatchery facilities and release sites must be located away from large populations of wild salmon and go through a rigorous review process to receive approval, and not all are approved. This prevents returning hatchery-born fish from pushing wild fish out of their native lakes, streams or estuaries and minimizes interactions between the two.

Why has Alaska succeeded where others have failed? Unlike other states, Alaska’s hatchery program is designed to supplement — not replace — wild salmon to prioritize wild salmon sustainability. Hatchery-born fish returning from the ocean relieve harvest pressure on wild stocks, particularly in years when wild stock returns are low, thus insulating both wild salmon populations and resource users from boom-bust cycles.

To protect the genetic diversity of wild salmon, hatcheries use only eggs and milt taken from a large number of local adult fish, called broodstock. These are selected without regard for size or any other trait. Per state law and Fish and Game regulations, breeding or manipulating stock genetics is prohibited. Thus, if any hatchery-born fish happen to stray, it would have a genetic makeup similar to local wild populations.

To distinguish hatchery-born fish from their wild counterparts, hatcheries mark their fish before release. While coded wire tagging is still used to mark hatchery-born coho and kings, most PNP hatcheries use otolith — inner ear bone — markings created by manipulating water temperatures to mark all pinks and chums. Otolith marking in particular allows Fish and Game and PNP hatchery biologists to track hatchery fish and assess migration patterns, harvest percentages and escapement numbers. Through these methods, Fish and Game can track and quantify data on hatchery-born salmon year in and year out.

However, Alaska’s hatchery program is not without its critics. Some worry that hatchery salmon are displacing wild salmon in the ecosystems they share, or that interbreeding reduces the genetic fitness of wild populations. To better our understanding of these complex issues, Fish and Game has launched the Alaska Hatchery-Wild Salmon Interaction Study to scientifically investigate any potential genetic concerns, document stock interactions, and measure potential changes in the fitness of wild populations. This research is overseen by an independent science panel selected by Fish and Game. This comprehensive research study began in 2011 and will end in 2023, following a rigorous peer review process.

An emerging debate within the scientific community is whether large pink salmon populations, including those of Alaska hatchery origin, threaten other North Pacific species. Two important points are relevant to this discussion. First, while pink salmon are the most numerous salmon species in the North Pacific (67% of the combined number of pink, chum, and sockeye salmon), they do not make up the largest biomass of salmon in the ecosystem. That honor belongs to the bigger chum salmon, which comprise 60% of the total salmon biomass — three times the biomass of pink salmon. And second, only 15% of the pink salmon in the North Pacific originate from hatchery stocks. Thus, hatchery-born pinks represent only 3% of total salmon biomass (with pinks born in Alaska hatcheries representing a fraction of that 3%). To zero in on hatchery-born pink salmon as a barometer of impact to the trophic zones of the North Pacific is simply not supported by the available data.

In looking back, we’re proud of how far Alaska’s fisheries have come with the help of its hatchery programs. Most of Alaska’s wild salmon stocks have consistently increased in their returns since the 1970s, and the hatchery program is dedicated to fostering these positive outcomes for all user groups in Alaska. The accomplishments and success of the Alaska hatchery program, as laid out through its mission set by the Legislature in the 1970s, can be demonstrated through the data and the successful harvests in sports, commercial, and subsistence fisheries in recent decades. Despite the ups and downs of salmon cycles, Alaska’s relatively stable hatchery production has supported harvesters by creating more opportunity, while simultaneously reducing pressure on wild-born stocks. This is an achievement that this program stands behind now as we, as Alaskans and salmon harvesters, face unknown challenges in climate and environmental impacts in the future. Together, Alaska’s salmon fisheries are a model for those in the Lower 48 — one that maintains strong runs, strong harvests, and robust, sustainable, science-based management for generations to come.