Save the National Archives at Seattle, a link from past to present 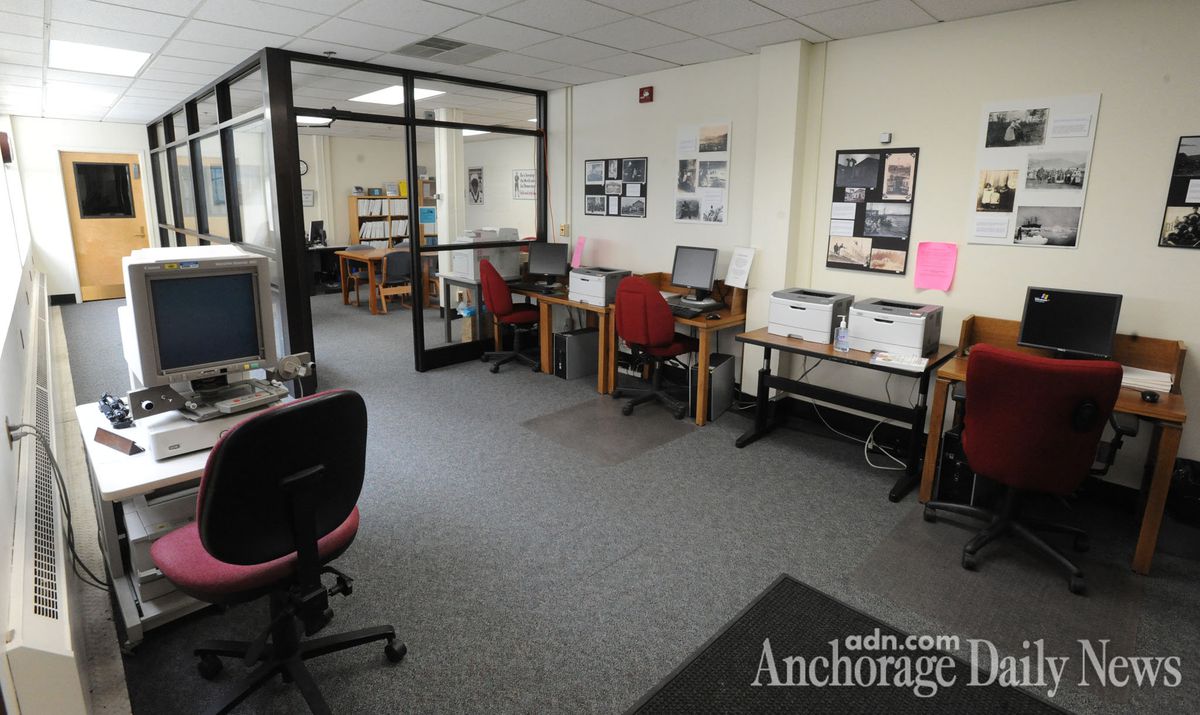 Micro film and public computers in the research area at National Archives and Records Administration Pacific Alaska Region building on Third Avenue in Anchorage on Monday, March 10, 2014. The building was closed in 2014 and the archives were moved to Seattle.

Micro film and public computers in the research area at National Archives and Records Administration Pacific Alaska Region building on Third Avenue in Anchorage on Monday, March 10, 2014. The building was closed in 2014 and the archives were moved to Seattle.

The federal government’s role in Alaska is wide in scope and deep in history. The legacy of the federal government is present in the laws that govern our land, the marine resources that are critical to Native subsistence, the mining records that regulate access and use of mineral resources, and the court records that establish birth, death and citizenship. The records of the federal government are housed in the National Archives and Records Administration (NARA). In 2014, the Alaska records were moved from Anchorage to Seattle, and now there is a proposal to move them out of the Northwest entirely and divide them between Perris, a small city in the California desert, and a site outside of Kansas City, Missouri. This would be a disaster to anyone who seeks a greater understanding of our shared heritage as Alaskans.

An obscure federal agency, the Public Buildings Reform Board, proposed the move and set the decision into motion. They seem to have conducted only one public meeting to explain their decision to shutter the Seattle facility. That meeting occurred in Denver, of all places, and the Board neither sought nor received feedback from the residents who live in the Pacific Northwest.

Fortunately, there has been an upswell of bipartisan opposition to the proposed relocation of these valuable federal records. Representatives from Alaska, Washington, Oregon and Idaho have all recognized that this decision, made in haste and without proper notice or discussion, would undermine the very mission of National Archives, which states: “Public access to government records strengthens democracy by allowing Americans to claim their rights to citizenship, hold their government accountable, and understand their history so they can participate more effectively in their government.” One wonders what definition of “public access” is satisfied in the relocation of many of our most significant public records a second time in six years.

Indeed, for Alaskans, this decision cuts particularly deep. When NARA at Anchorage was closed in 2014 and the records relocated to Seattle, the residents of Alaska were promised that the records would at least stay in the Pacific Northwest. In fact, the primary reason that the National Archives established a facility in Alaska in 1990 was the pervasive federal presence in Alaska, beginning with the Alaska Purchase Treaty of 1867 and continuing through the District (1867-1884), Territorial (1884-1958), and Statehood (1959-) periods. In particular, the U.S. Department of the Interior agencies (National Park Service, Bureau of Land Management, Bureau of Indian Affairs and the Bureau of Ocean Energy Management), the National Oceanic and Atmospheric Administration and its predecessors with fisheries regulations, and the Alaska Road Commission had a large impact on the economic development and daily lives of Alaskans. As a young state, Alaskans and federal agencies rely on NARA for documentation to settle land issues, such as land claims and disputes, state and Native land selections, and navigability through federally owned lands and waters.

Some may be untroubled by the decision to close the Seattle facility or find it fiscally prudent. They believe that physical archives are obsolete in the age of digital communications. Are not such records easily accessible to anyone with an internet connection? Unfortunately, no. It is a myth that all records are or can be digitized. It takes time, money and staff to do this enormous job. Cataloging, organizing and posting even a highly curated selection of Alaska’s records has already proven beyond the capabilities of hard-working archivists in Seattle who have been at it for more than five years. Now imagine the same issue with the records of Alaska, Washington, Oregon and Idaho being moved to separate locations in Missouri and California.

According to NARA, the Seattle facility must be closed because it is too old and in need of extensive and costly repairs. They claim to have failed to find an alternative location in the region to house the records. We do not accept this excuse. Surely there must be a cost effective and accessible location for a new site somewhere in Washington, Oregon, Idaho or Alaska – states that, when combined, compose roughly half of the nation’s land area. Therefore, we are calling on NARA, the Office of Management and Budget, the General Services Administration) and the Public Buildings Reform Board to extend their search in the Pacific Northwest so they will meet their mandate to continue to provide reasonable public access to vital records for those who live and work in this vital region. We hope you’ll join us.