Living with climate change in a year of fire and ice 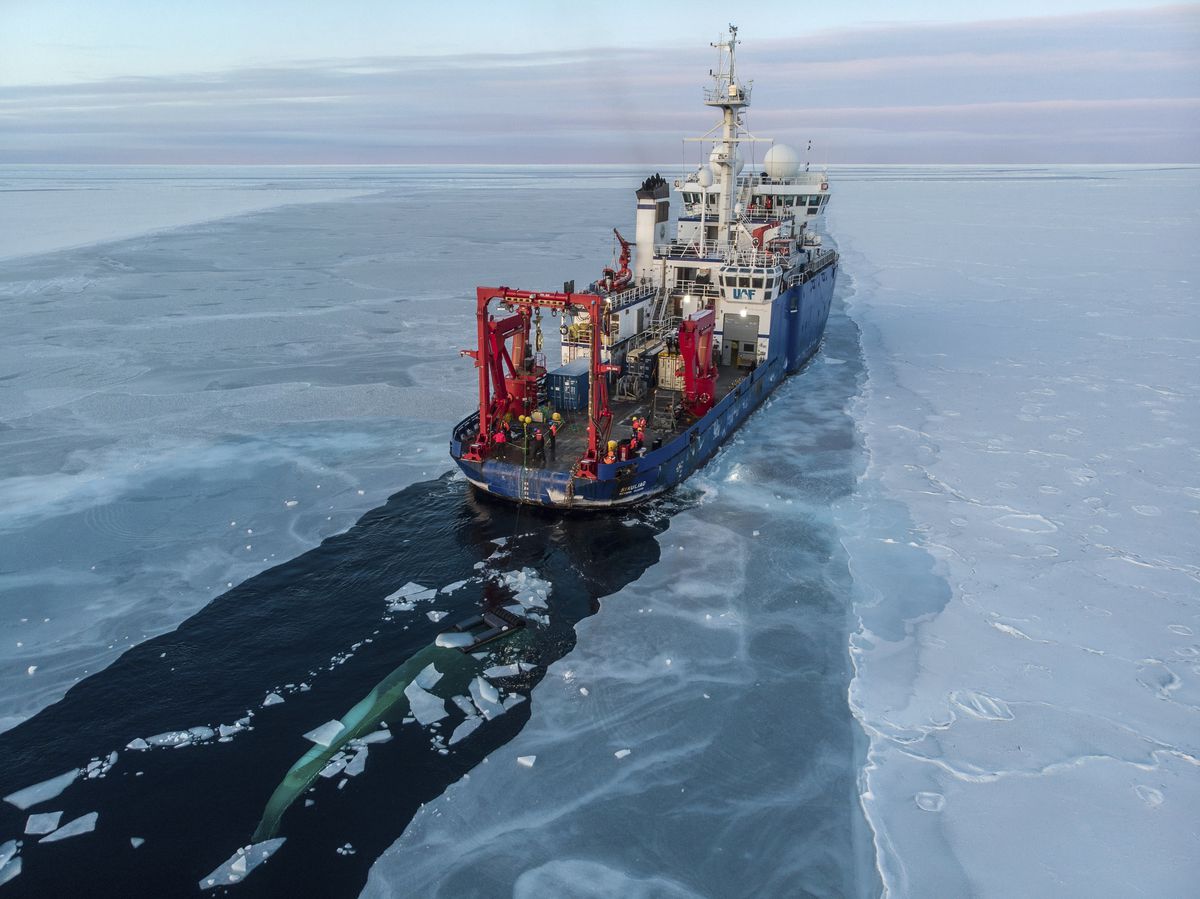 In this Nov. 14, 2019, photo provided by John Guillote and taken from an aerial drone shows the U.S. research vessel Sikuliaq as it makes its way through sea ice in the Beaufort Sea off Alaska's north coast. University of Washington scientists onboard the research vessel are studying the changes and how less sea ice will affect coastlines, which already are vulnerable to erosion because increased waves delivered by storms. More erosion would increase the chance of winter flooding in villages and danger to hunters in small boats. (John Guillote via AP)

In this Nov. 14, 2019, photo provided by John Guillote and taken from an aerial drone shows the U.S. research vessel Sikuliaq as it makes its way through sea ice in the Beaufort Sea off Alaska's north coast. University of Washington scientists onboard the research vessel are studying the changes and how less sea ice will affect coastlines, which already are vulnerable to erosion because increased waves delivered by storms. More erosion would increase the chance of winter flooding in villages and danger to hunters in small boats. (John Guillote via AP)

I saw Arctic sea ice for the first time almost exactly a year ago. The floes continued to the horizon, bright white shards embedded in dark water under a sky that was darkest and most brooding where the two met.

There was new ice forming in the open water amid the older floes. Sometimes this ice was so thin that it was more a matrix of congealing crystals than a brittle sheet. Waves rolled through as perfect hills and valleys, silent bands of light and shadow. Bubbles under the ice darted around like white fish.

I tell you this because I want you to know the ice as I now know it — not bleak and unbroken, but dynamic and arresting. Something like fire. For who can wrest their eyes from the specter of flames?

Some tell me I am lucky to have seen the Arctic Ocean “before it is gone.” They are wrong, of course. Climate change has profoundly altered the Arctic already, as Native people have been telling us for decades. Arctic sea ice extent reached its annual minimum last week at its second-lowest area ever measured.

When I was on that ship in the Arctic, I worked at a winch raising and lowering a probe that measures the ocean’s temperature and salinity. Every hour I downloaded a new swath of data. What I saw alarmed me. There were puddles of warm subsurface water oozing across the Beaufort Sea. While the existence, and increasing heat content, of this warm layer are known, I was still unprepared to see the warm temperature spikes lurking below the ocean surface. Part of the allure of doing science is learning things that no one has known before. I wondered if my career would be a macabre version of this privilege, an onslaught of data showing how much the ocean has already changed.

This year I am not in the Arctic, but in Seattle where I am a Ph.D. student. In some ways these two Septembers of my life could not be more different from each other — a year of fire and a year of ice. Yet each has been marked by the undeniable signs of accelerating calamity.

The record-setting wildfires burning the West Coast have been called a climate wake-up call. How many such wake-up calls have we had? Those of us who are not immediately threatened by the fires are, I think, experiencing something akin to the dissonance of watching those warm ocean temperatures cross my computer screen. We are not fleeing; we are simply living with smoke. It’s less like holding a grenade and more like holding something that has already been torn from the soil and is now wilting.

As smoke choked Seattle for much of the last two weeks, there were periods when I could think only of the acrid sky and periods when, like usual, I analyzed the data collected in that distant ocean. I looked out at what could be a thick Pacific Northwest fog if not for its mustard tint. I looked back at the ocean temperatures on my screen. Sadness and fear rose and fell in me like the tide.

Is this what it is to live with climate change? To carry on as normal even though nothing is normal, even though my head aches from breathing smoke?

Events like these — fires, an Arctic of shriveled ice — make climate change feel most acute. Yet even when we are not living in smoke, we are still living with climate change. The roar subsides to a sigh, but it does not go silent. Listen, as if you were listening through the wind for the sound of waves slithering up and down the beach. It’s unmistakable.

Laura Crews is a Ph.D. student in oceanography at the University of Washington and a 2010 graduate of South Anchorage High School.