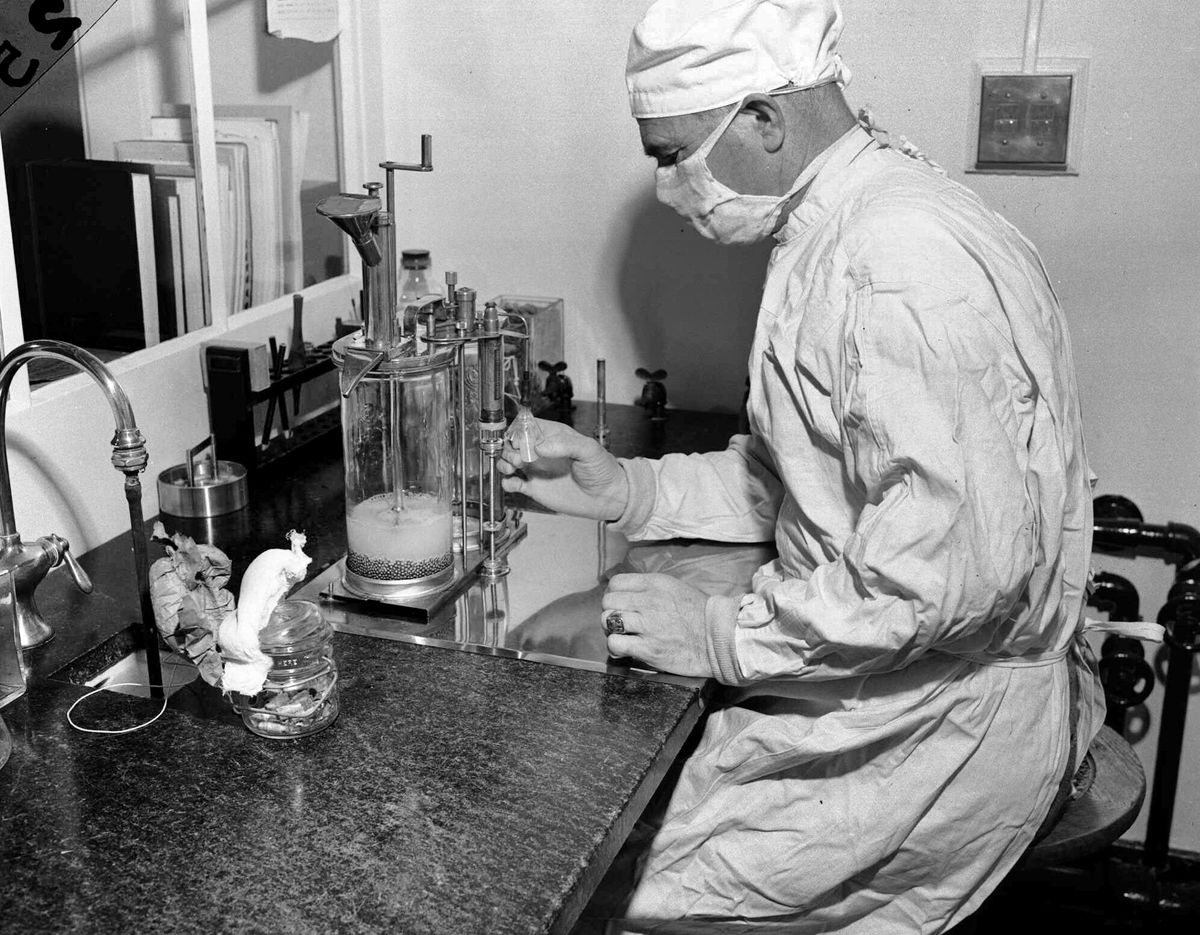 FILE - In this Dec. 2, 1947 file photo, Charles D. Brown, fills a vial with the BCG tuberculosis vaccine, at a state-operated laboratory in Albany, N.Y. Scientists are dusting off some decades-old vaccines against TB and polio to see if they could provide stopgap protection against COVID-19 until a more precise shot arrives. (AP Photo)

FILE - In this Dec. 2, 1947 file photo, Charles D. Brown, fills a vial with the BCG tuberculosis vaccine, at a state-operated laboratory in Albany, N.Y. Scientists are dusting off some decades-old vaccines against TB and polio to see if they could provide stopgap protection against COVID-19 until a more precise shot arrives. (AP Photo)

The surge in COVID-19 cases today in Alaska is at best alarming, at worst intensely frightening. Urgent, official pleas to wear masks manifest the high level of concern, as do restrictions on where and under what circumstances people can meet. Answers to questions about how long restrictions might last, and when the pandemic may ease, remain inconclusive and largely speculative.

Students of history, Tim Troll among others, have compared what we are experiencing today with the terrible flu epidemic of 1918-1919. Brought north by Alaska Packers’ Association cannery crews and other carriers, the disease killed hundreds of Native villagers in the Bristol Bay region, but also in other regions of the territory. Some villages were effectively de-populated. Interestingly, that epidemic affected more adults than children, leaving countless orphans in west and northwest Alaska.

But little remembered in contemporary Alaska is a scourge even worse than the 1919 epidemic and far more devastating than what we see today, one that attacked young and old alike all across the territory, leaving families distraught and medical personnel desperate. That was tuberculosis. A state of Alaska Epidemiology Bulletin from 2017 reports that “in the early 20th century Alaska had some of the highest TB rates anywhere in the world. Alaska Native people experienced extraordinary rates of disease and death from TB.” A 1934 survey found that TB constituted 35% of all deaths among Alaska Natives, the highest rate for children under five years.

Studies of human remains from St. Lawrence Island and Utqiaġvik show that TB has been present in Alaska for 1,500 years. But the modern epidemic began with contact with explorers, whalers and gold rushers who came from areas with high rates of the disease. TB was the leading cause of death in the U.S. at the time. It spread rapidly among a Native population particularly vulnerable because of living in conditions ideal for its incubation: small dwellings with limited ventilation and continued close contact.

After the turn of the 20th century, government medical personnel quickly became aware of the menace of TB among Alaska Natives. The accepted method for treating the disease was isolation with good sanitation in well-ventilated quarters with nurturing care. In 1925, a former military hospital in Tanana was opened for TB patients, and in 1931, an annex was opened at the Juneau Native hospital. But little more was done before the end of World War II, even though construction of numerous sanatoriums in the contiguous states did much to stem the disease there.

Finally, beginning in 1944, the territorial Alaska Health Department fitted out several seagoing vessels to visit coastal villages to diagnose the disease, conducting X-rays and tuberculosis tests. Also, sanatoriums were opened in vacated Army hospitals in Skagway, Seward and Sitka in 1945, 1946 and 1947, respectively.

In 1947, the American Medical Association sent a survey team to Alaska to assess the need. They urged provision of 1,000 beds for treating the disease, which by then was rampant across the territory. In 1953, the Alaska Native Service Hospital in Anchorage opened. It was not enough. In 1954, a second team investigated Alaska, this time headed by former U.S. Surgeon General Thomas Parran. In six weeks spent interviewing villagers, they determined that TB mortality in Alaska was 30 times greater than in the contiguous states. More than 65% of Alaska Natives tested positive for TB. The Parran report urged a “crash” program to tackle the epidemic. Fortunately, government agencies funded the recommendations.

The extraordinary public health physician and medical historian Robert Fortuine (1934-2008) gave an account of the tuberculosis epidemic among Alaska Natives in his thorough and sensitive book, “‘Must We All Die?’ Alaska’s Enduring Struggle with Tuberculosis.” He took his title from a 1946 interview with a Native man who asked that a doctor see his nine-year old son. At the time, many in his village were infected. After examining the child, the doctor told the father his boy had advanced pulmonary TB and would soon die. “Five of my children die this way — I don’t want my other kids to go. Must we all die?”

New medical treatments finally brought the epidemic under control, though TB is not eradicated. The toll it took on Alaska’s Native people, and their courage and resilience in its face, is too little known.