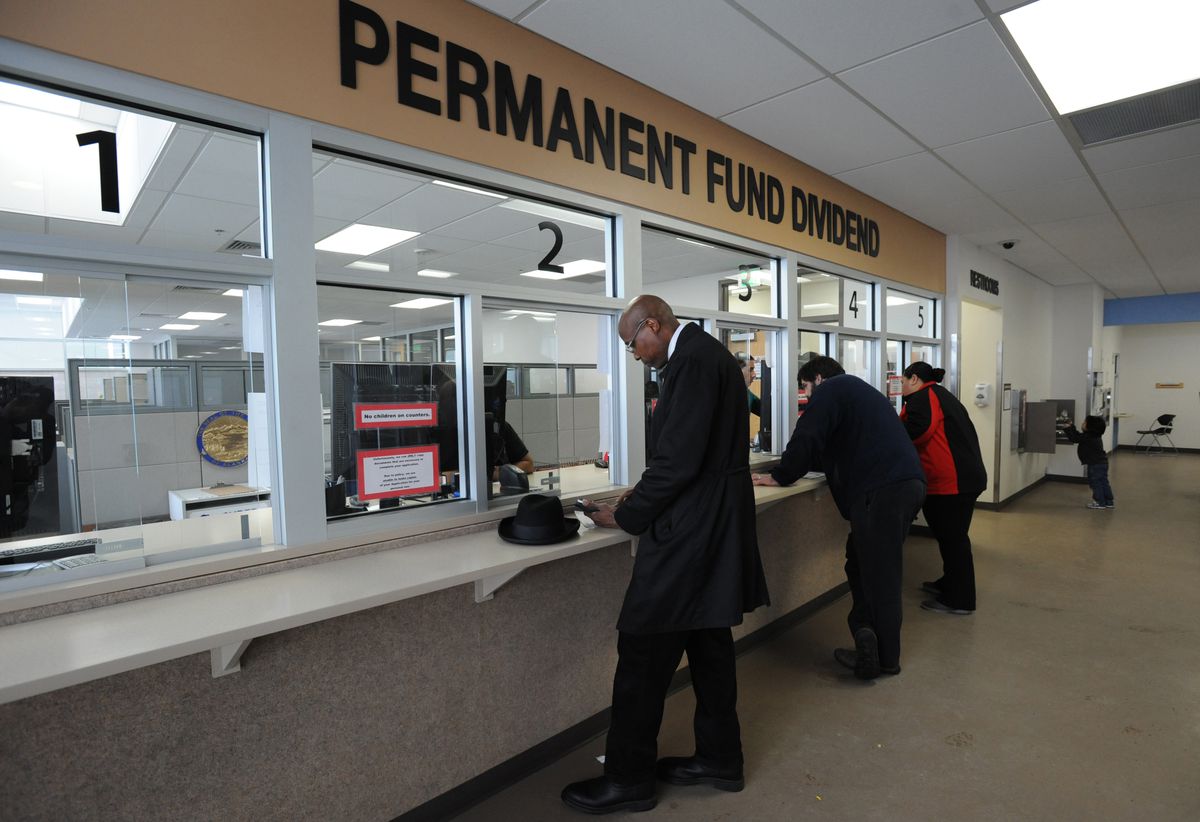 Edgar Lattimore applies for the Alaska Permanent Fund dividend on Thursday, March 30, 2017, at the PFD office in downtown Anchorage before the filing deadline on Friday. (Bill Roth / ADN)

Edgar Lattimore applies for the Alaska Permanent Fund dividend on Thursday, March 30, 2017, at the PFD office in downtown Anchorage before the filing deadline on Friday. (Bill Roth / ADN)

Alaskans who have their Permanent Fund dividend checks direct-deposited will be $1,600 richer Thursday when the annual payment hits bank accounts across the state. Since 1982, the yearly checks have made life a little easier for residents of the Last Frontier, and management of the account that pays for the dividend has emerged as a hot-button issues in this year's races for governor and Legislature. Despite all of that attention, however, there are still a few things many people don't know about the dividend.

1. Even though this year's dividend is reduced, it's not small, historically speaking.
This year, the Legislature passed a framework to take a portion of Permanent Fund earnings and use them to pay for state services. In doing so, they set this year's dividend amount at $1,600, which is considerably less than the more than $2,900 it would have been if calculated using the statutory math. But that doesn't mean this year is chump change. The $1,600 check is the eighth-largest ever, and even when adjusted for inflation, it's not bad. The average inflation-adjusted dividend check tips the scales at $1,672.72. The largest dividend ever was in 2000 — its $1,963.86 check would equal $2,844 in today's dollars. The smallest was in 1984, when the payout was $331.29 per person — $793.29 today.

2. Under the original plan, those who had lived in Alaska longer would have received larger dividend checks than new arrivals.
Under the framework for the Alaska Permanent Fund and the dividend program as initially conceived, residents would have received $50 for every year they'd been an Alaska resident, up to a maximum of 20 years (and thus a maximum check size of $1,000). Unfortunately for sourdoughs, the U.S. Supreme Court struck down that formula in a 1982 case known as Zobel v. Williams, finding it unfairly burdensome to interstate travel.

3. The Permanent Fund is invested in all kinds of places.
The money that makes up the constitutionally protected principal of the Alaska Permanent Fund is invested widely, in safe bets like bonds and more volatile commodities like stocks — as well as a surprising variety of real estate properties. The Alaska Permanent Fund Corporation, and by extension Alaskans, own a mall in Portugal and a Crate & Barrel store in Virginia. Other highlights include a Tropicana orange juice warehouse in Ohio, a rehabilitation hospital in Massachusetts and a 368-unit apartment community in Texas.

4. About 1 in 20 dividend applications is rejected.
Roughly 21.5 million dividend applications were filed between 1982 and 2017; of those, about 20.5 million were approved. Often, rejections occur because people run afoul of residency requirements — going Outside for college or long vacations can trigger special requirements or require additional documentation to prove Alaska residency. Also, the condition of receiving the dividend that the most applicants likely fudge on: "On the date I apply for (this year's) Permanent Fund Dividend, I have the intent to remain an Alaska resident indefinitely." Each year, between 5 percent and 7 percent of Alaska residents leave the state — it's one of the highest out-migration rates of any U.S. state.

5. We don't actually have a great sense of the dividend's impacts on the economy.
Although the dividend pumps a tremendous amount of money into the pockets of Alaskans every year, the state has never done an audit or study on where that money goes and how it affects Alaska. There have been third-party studies that have looked at the effect of the dividend on the job market (it has little to none, according to researchers earlier this year), and estimates of its impact have been made based on assumptions about how people spend the money, but no detailed, large-scale analysis has yet been undertaken. Lawmakers are understandably wary of asking people what they do with the money (for instance, how many parents spend their children's dividends vs. investing them in savings accounts), as it could be seen as a precursor to modifying or doing away with the program.

More understanding of one of the biggest state expenditures each year is vital. Alaskans should endeavor, individually and collectively, to learn more about the dividend they receive as a benefit and the fund that provides for it, instead of simply cashing the check.