Trump is pushing a dangerous, false spin on coronavirus - and the media is helping him spread it 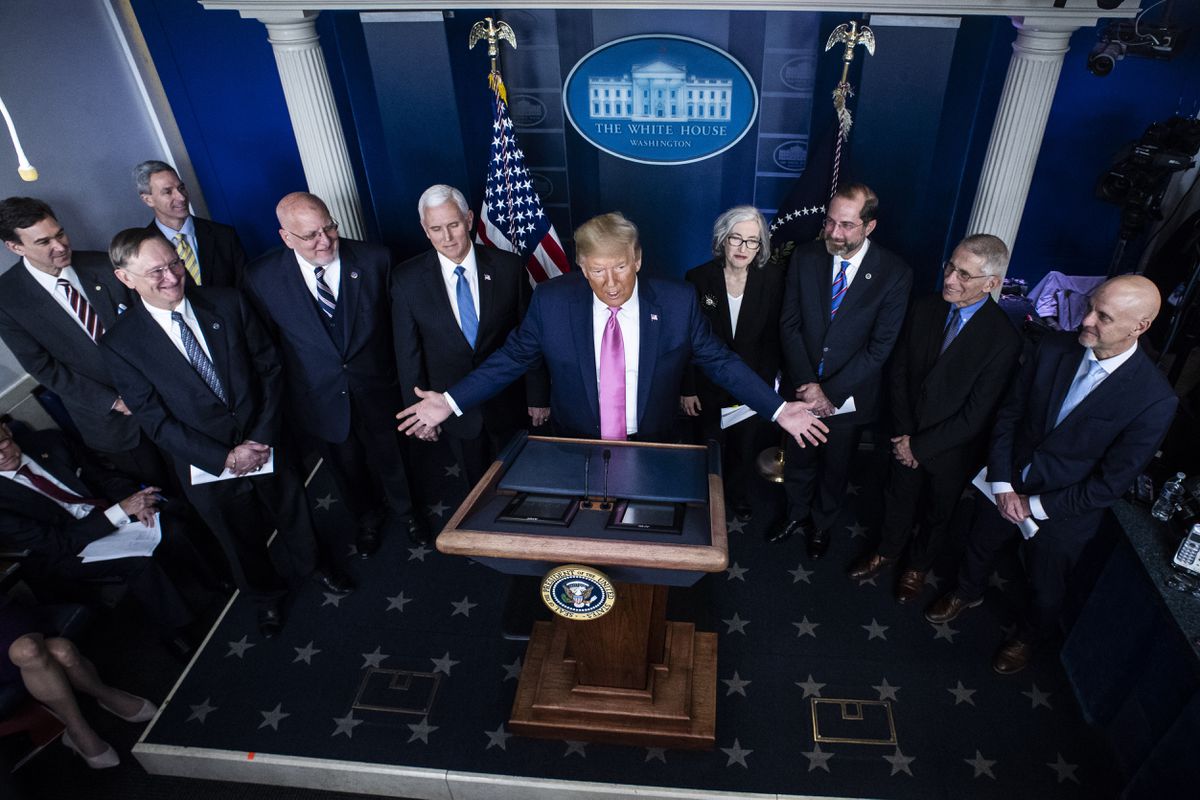 President Donald Trump, flanked by Vice President Mike Pence and members of the Coronavirus Task Force, speak at a news conference at the White House on Wednesday. Washington Post photo by Jabin Botsford

President Donald Trump, flanked by Vice President Mike Pence and members of the Coronavirus Task Force, speak at a news conference at the White House on Wednesday. Washington Post photo by Jabin Botsford

Among the many outlandish statements President Donald Trump has made since taking office, one in particular stands out for me.

Speaking in Kansas City in the summer of 2018, he urged the attendees of the VFW annual convention to ignore the journalism of the mainstream media.

"Just stick with us, don't believe the crap you see from these people, the fake news," he said. "What you're seeing and what you're reading is not what's happening."

In other words, if you didn't hear from me or my minions, it isn't true.

Chico Marx memorably expressed a similar idea in the 1933 comedy "Duck Soup": "Who ya gonna believe - me or your own eyes?"

It's a dumbfounding notion, especially given Trump's proven propensity for lies and falsehoods. But now as a deadly disease, the coronavirus, threatens to turn into a full-blown pandemic, it's not simply bizarre in a way that can be easily shrugged off. It's not just Trump being Trump.

And it's definitely not funny. It's dangerous.

Trump and his chosen spokespeople are attempting to dramatically play down the seriousness of the coronavirus and to blame the legitimate news media for doing their jobs of informing the public.

In reporting what Trump has to say, the news media has a huge responsibility not to repeat and amplify his misleading spin - a spin that may serve his political interests but is not in the public interest.

It's not always easy, though, for mainstream journalists to put his claims in the proper context.

After all, it had always been normal to let a president have his say - to let his statements top the news while letting the fact-checks follow.

That has changed somewhat during the lie-ridden Trump administration but not nearly enough. The reflexive media urge, deep in our DNA, is still to quote the president without offering an immediate challenge.

That's why we continue to see headlines and chyrons that parrot his words directly, no matter how misleading: That the virus will disappear, that it's not inevitable that the disease will spread, that a vaccine is coming along 'rapidly,' that the United States is "very, very ready" to deal with whatever happens.

When journalists do push back with fact-checks or with dissenting sources from the worlds of science and medicine, Trump and the administration attack the messengers. Sometimes that takes the form of disparaging tweets such as one from Wednesday in which he charged cable networks MSNBC and CNN of "panicking markets" and in which he bragged "USA in great shape!"

His most dependable allies are right there with him - accusing the mainstream news media of using virus coverage to try to take down the president.

Their logic seems to be that the drastic stock market declines in recent days are the result of media overkill, not legitimate business concerns. "What I might do to calm the markets is turn the television off for 24 hours," was acting White House chief of staff Mick Mulvaney's advice Friday to the audience at the Conservative Political Action Conference.

Some months ago, I wrote about the linguist George Lakoff's prescription for handling the president's false statements and lies, an approach that's become known as the "truth sandwich."

Avoid giving prominence to lies, he advises. Don't put them in headlines, leads or tweets. It is that very amplification that gives them power, even if they are proclaimed false in the next beat.

Of course, that recommendation runs in direct opposition to how news usually works. Traditionally, we have emphasized the words of top officials, and only then tempered them with fact-checks.

Too often, Lakoff told me, the media "has become complicit with Trump by allowing itself to be used as an amplifier for his falsehoods and frames." And that's true even when journalists make lists of lies. It's the repetition and the prominence that does the harm.

Trump's tendency to spin out assertions untethered from reality becomes a recipe for disaster when combined with his disdain for scientists, medical experts, intelligence officials, journalists and others who deal in fact-based reality.

Add in the dangers of a disease rapidly approaching pandemic proportions, and it becomes more important than ever to emphasize truthful information over false spin.

I’m convinced that we in the media, with all our obvious faults, have learned some things about covering Trump over the past four years. Now would be an excellent time to put it into practice.

Margaret Sullivan is The Washington Post’s media columnist. Previously, she was The New York Times public editor, and the chief editor of The Buffalo News, her hometown paper.