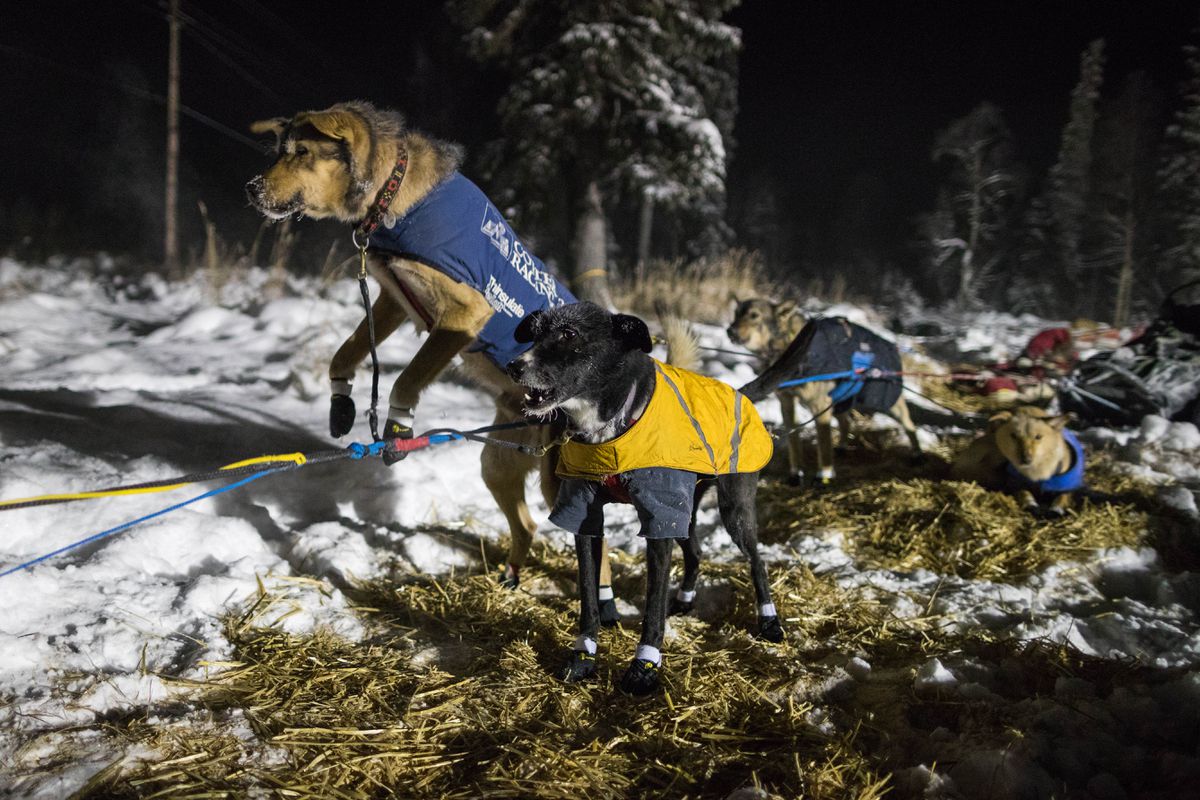 Jessie Holmes’ dogs jump in anticipation before they leave the Kalskag checkpoint during the Kuskokwim 300 sled dog race earlier this season.  Holmes was the surprise winner of the season-ending Kobuk 440 over the weekend. (Loren Holmes / Alaska Dispatch News)

Jessie Holmes’ dogs jump in anticipation before they leave the Kalskag checkpoint during the Kuskokwim 300 sled dog race earlier this season.  Holmes was the surprise winner of the season-ending Kobuk 440 over the weekend. (Loren Holmes / Alaska Dispatch News)

Jessie Holmes and his sled dog team showed promise early on in this year's Kobuk 440, holding onto their speed across hundreds of miles and finishing the race Sunday with a championship against top-flight competition.

If people didn't know who he was before, Holmes said he felt like this was a pretty good introduction.

"I feel like this is a major breakthrough," Holmes said in a phone interview from Kotzebue on Monday, awaiting the finishers' banquet that evening in the northwest Alaska community.

The 35-year-old Nenana musher, a relative newcomer to the scene, beat a strong field of well-known competitors including four-time Iditarod champions Jeff King and Dallas Seavey, who finished an uncharacteristic 10th, as well as Nicolas Petit of Girdwood, who placed third in this year's Iditarod and second in the Kobuk 440.

The Kobuk 440 is the last major sled dog race of the season and it sends mushers and their dogs on a 440-mile trail above the Arctic Circle. The route travels east from Kotzebue to the villages of Noorvik, Kiana, Ambler, Shungnak and Kobuk before looping back to Kotzebue, where teams started to arrive early Sunday.

With more than 14-hours of daylight now in Kotzebue, Holmes said the sun beat down on the teams in the fast-pace race that started Thursday afternoon. He described the heat as "suffocating."

"It's so wide-open up there and the sun reflects off all this open country and it just bakes you. I have sunburn and you can't not have shades out there or you'll go snowblind," Holmes said. "We're used to noon to 2 p.m. being the heat of the day. Up there, it's like a big, giant heat of the day."

The Kobuk 440 marked Holmes' fourth sled dog race of the winter. He and his team placed first in a 65-mile race along the Denali Highway in December, following that with a fifth-place finish in Bethel's Kuskokwim 300 and a second-place finish in a 106-mile race that he helped organize as a memorial for a friend.

"We did that race at some extremely fast speeds," Holmes said.

Speed is something Holmes tries to capitalize on. He has a fast dog team that doesn't stay at a 9-mph trot, he said, but reaches speeds of "13 or 14 or even 15 mph." Others might see this as a sign that the team will "crash and burn" — pushed too hard, stopping on the course and refusing to go farther, he said. But Holmes said he has bred his dogs for speed and trained them for lung capacity.

"It's a special group of dogs," Holmes said. "I want to do things different."

Holmes has done things a bit differently for years.

At age 16, he left his home in Odenville, Alabama, for a life jumping freight trains and traveling the country with his dog, a Rottweiler-German shepherd mix named Freedom.

Holmes said he traveled to Montana and California and "ended up in jail a couple of times." He said he eventually had an epiphany: "That I wanted to live in the woods and the wilderness and be a mountain man like Jeremiah Johnson. So I kept heading north."

He said he traveled by train to Fort Nelson, in British Columbia, and hitchhiked from there. He found his way to the Yukon Territory where he helped a man run traplines with dog teams.

"Dogs changed everything for me," he said.

About 12 years ago, Holmes moved to the tiny Alaska community of Eagle, just west of the Alaska-Canada border. He had a team of "big, furry dogs" to run traplines with, haul wood and water, hunt caribou and travel.

"It went on for six years and then some life changes happened. I split up with this gal I wanted to marry," he said. "It was like this crossroads."

Holmes said he knew he liked dog mushing, so he thought he would give it a more serious try. He ran his dogs west to Fairbanks to compete in his first 200-mile race around 2006 and came in last.

"I was like, 'Man, you know, I'm not that good at this. I've got to change some things,'" he said. "I started trying to get faster dogs."

Takes on role in reality show

About five years ago, Holmes started to run dogs competitively again, participating in sprint races and middle-distance races across Alaska.

He moved to the community of Nenana, about 55 miles southwest of Fairbanks, and bought the dog yard once owned by Jerry Riley, the 1976 Iditarod champion. He lives there in a cabin on the Nenana River that he calls a "shack." It has no running water or electricity. He has 38 dogs. He hunts and goes fishing in the summer. He takes his dogs on long walks, letting them play by the river for an hour or so, he said.

"I bring them inside on a regular basis and let them dry out and lay around," he said. "I have a big carpet and a couch that I rarely have a spot to sit on."

He said he has a sponsor that makes his gear and a sponsor that pays for him to fly to races, but he doesn't have any major sponsors to help fund his kennel. He pays for expenses with race winnings, profits from carpentry work and income he earns as one of the stars of the Alaska-based reality TV show, "Life Below Zero," a National Geographic Channel series that follows six people "as they battle for the most basic necessities in the state with the lowest population density in the United States," according to the show's website.

"At first I didn't really want to do it. I sort of told them to go to heck with the whole deal," Holmes said. "It didn't really matter to me to be on TV. That's not something I wanted to do. But the money was good and I was like, 'Well, this is kind of an opportunity I should not pass up.'"

Holmes said that job helped him succeed in dog mushing by providing him income while he does the things he loves to do — going out on the river, fixing things around his home, spending time with his dogs.

"That keeps me right at home with my dogs," he said. "I'm pretty thankful."

Running with the dogs

Over the summer, Holmes said he plans to continue to train his dogs in cooler evening temperatures, if the weather allows. He will also fish and hunt and likely film more episodes for the television show. The dogs aren't the only animals in training. He's a long-distance runner, too.

During the Kobuk 440, Holmes said he ran up every hill. When he wasn't running, he kicked and used his ski pole to help his team. When he reached the finish line in Kotzebue at 1:51 a.m. Sunday, with nine dogs, including his leaders Kors and Zeus, he said he couldn't stand.

His payout was $12,858. He said his team was made up of 3-year-old dogs, some that he bought from King. It was the first time Holmes and his team had run the Kobuk 440. Last year, he won the Yukon Quest 300 on his first try.

Holmes said his short-term goal is to win the Kusko 300, a fast-paced, sleepless race in January. One day, he hopes to run the long-distance races, including the Iditarod and Yukon Quest. He believes his team could do well and throughout Monday's interview he reiterated that the dogs are what it's about.

"They deserve the credit and not me. I just want to tell the story straight," he said. "Those dogs put their heart on the line for me everytime."