Cold, wet, bleeding — and thankful for the kindness of strangers 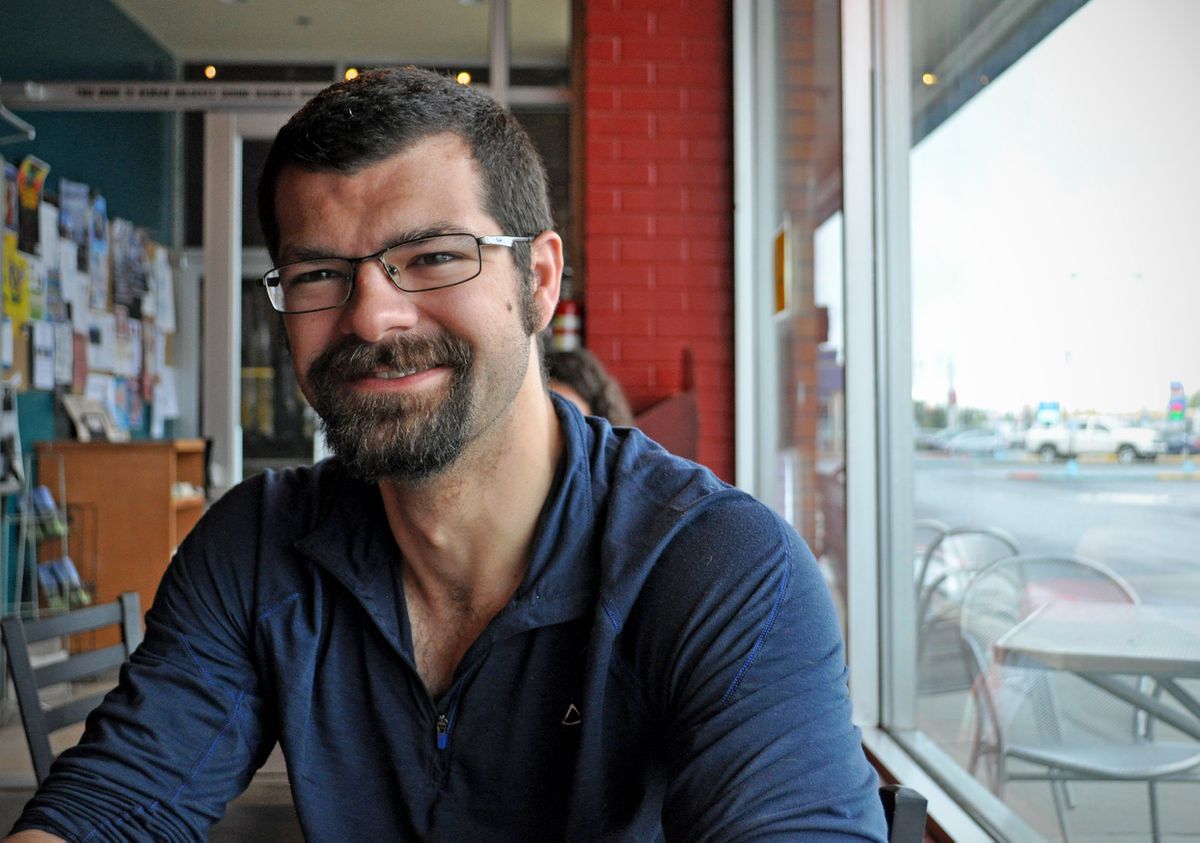 Anchorage resident Gerrit Verbeek, pictured Sunday, May 14, 2017, came away from a 2015 climb of Delgga Mountain near Crow Pass with a scar, a story and a beer debt owed to a stranger. (Vicky Ho / Alaska Dispatch News)

Anchorage resident Gerrit Verbeek, pictured Sunday, May 14, 2017, came away from a 2015 climb of Delgga Mountain near Crow Pass with a scar, a story and a beer debt owed to a stranger. (Vicky Ho / Alaska Dispatch News)

It takes ample grit and determination to tackle all 120 peaks in Chugach State Park.

That's what Anchorage resident Gerrit Verbeek is trying to do. An engineer with BP Alaska, he describes himself as a "cubicle monkey" during the week and a mountain goat on weekends. He's summited 59 Chugach peaks so far and is aiming to add another 30 this year.

But there's one climb that stands out.

Delgga Mountain, a 5,510-foot peak near Crow Pass outside Girdwood, was one of Verbeek's first objectives that lay off the beaten path.

On a gray, dreary day in September 2015, he slogged to the pass and crossed Clear Creek to adjacent Paradise Valley. From there, he booted up the snowy face of Delgga to reach the summit by midafternoon.

Then the trouble began.

Strong winds tore through the area, whipping snow through the air with such force that Verbeek felt like he was being sandblasted.

He knew he had to get down quickly, so he opted for a speedy glissade, sliding down the steep slope and using his mountaineering ax to slow his fall as needed.

But under the snow he slid on was some of the sharpest rock in the Chugach, in heaps of blade-like shale.

"I … was congratulating myself on a great decision when I stood up, looked around, and noticed there was blood everywhere and I had no idea where it came from," Verbeek said.

He started checking his body for injuries, and there it was: a slice that ran diagonally across his right pinkie knuckle, bone and joint clearly exposed. An examination of his left hand revealed a less serious cut on his left middle finger.

"I was a bit surprised at how clearheaded I was," Verbeek said. "No panic, everything just became a clear set of steps.

"Get down off the mountain. Splint the (pinkie) and wrap it in a sweater. Get out of Paradise Valley. Get across Clear Creek. Get over the saddle."

As he headed back to Crow Pass proper, freezing rain started to fall. The sun dipped beneath the mountains. Between his injury, the ensuing darkness and "sidehilling on wet tundra," he slowed his hiking pace to about 1 mile per hour.

Verbeek didn't notice at the time, but the rocks had also shredded the back of his pants — and he was wearing cotton base layers, generally discouraged among hikers because they retain moisture and won't keep you warm when wet.

By the time he saw the public-use cabin at Crow Pass again, he was cold, soaked and bloodied on what he described as "a slow, determined march back to the trailhead in the dark."

He had told friends in town to call the Alaska State Troopers if they hadn't heard from him by midnight. So while he considered trying to get into the cabin to spend the night, he decided to push onward to the trailhead to spare them some worry.

At that point, he saw a light shining through the cabin's window. As he passed the lake by the cabin, the door opened, the cabin's occupants cheered and they sent out a welcoming committee that included a few dogs.

Once that happened, Verbeek decided to sleep there instead.

He wasn't the person they were expecting to see, however.

Here's what happened: When they spotted Verbeek's flashlight in the dark, the group renting the cabin thought it belonged to a friend who was tentatively planning to join them for the weekend.

Their friend never showed up that night. But the cabin crew lent Verbeek dry clothes, fed him tacos and whiskey, helped him wrap his finger in gauze instead of his sweater/rock splint and offered him a spare bunk.

They even called troopers — from one of the few spots at Crow Pass with cell service — and told them to expect a call from Verbeek's friends, but he was safe and would be hiking out the following day.

"I hate to say I can't remember their names exactly, but I believe I owe a round of tall beers to some dude named (to my best memory) John Skinner and his friends," Verbeek said.

"I could have made it back to the parking lot but they made a tough night a hell of a lot better. I've asked around and looked on Facebook but haven't been able to find him since."

[Perfect weather can ruin a day in the Chugach Mountains]

The next day, Verbeek saw a doctor. It turned out he had severed the artery in his right pinkie, but the cut missed the tendon and nerves. Now, he says, his pinkie is as strong as ever.

Still, he's changed the way he goes about his mountain missions. He always wears gloves when he's glissading, because what's beneath the surface is a lot harder than snow. His base layers now are made of wool or quick-drying synthetics.

"The Chugach is still the best place I've ever found to exchange sweat for joy, and I've been lucky so far that it's never demanded more than I could give," Verbeek said.

Another takeaway? "Strangers in the backcountry are usually fantastic people."

So John Skinner — or whatever your name may be — I hope you find this column. I know a guy who'd love to buy you a round of beers.

Know before you go

"All the good coverage areas are a fair bit off the beaten path, but the ridge south of Crystal Lake is low and easy to access," Verbeek said.

Hopefully, you don't find yourself in Verbeek's position that night: cold, wet, injured and alone. But should you find yourself in dire straits, there's a chance you can call for help with just a cellphone, and save yourself a couple of hours spent incommunicado.