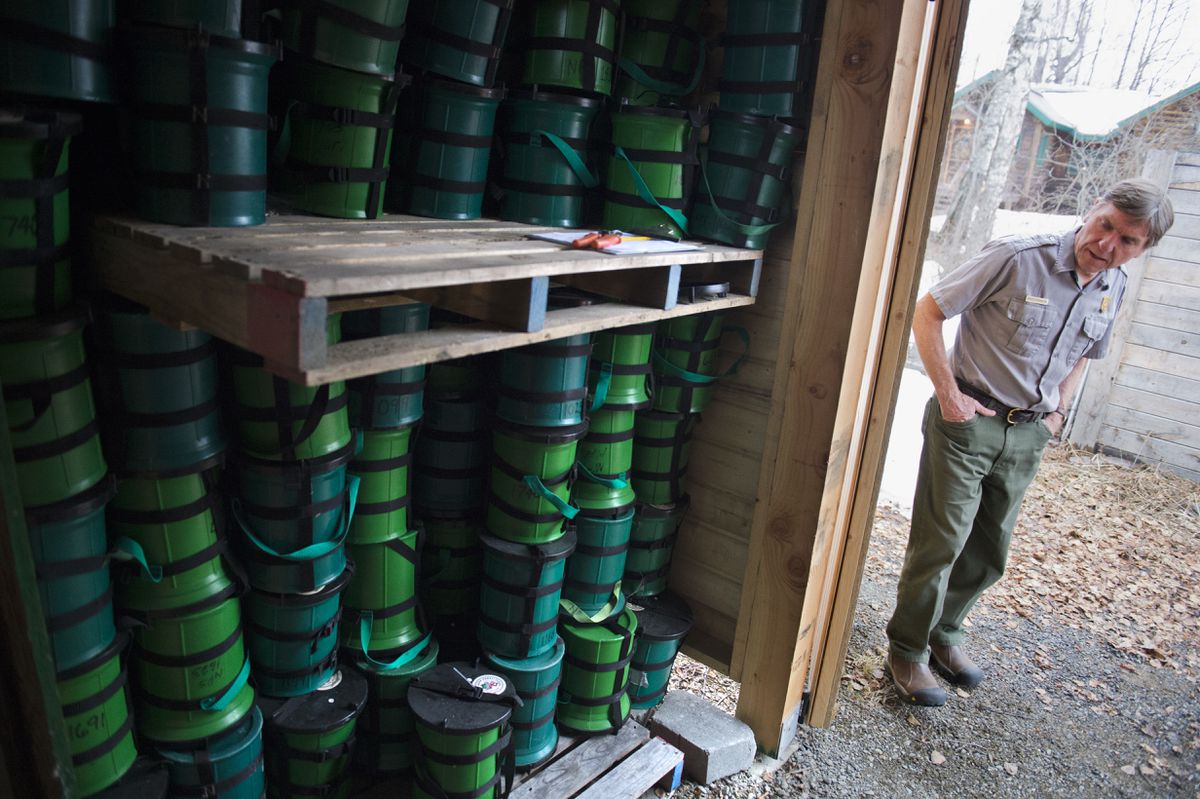 TALKEETNA — About 1,200 climbers from around the world congregate on North America's tallest peak every year, drawn to Denali's popular West Buttress route.

They spend days in alpine camps dotting the Kahiltna Glacier that underlies the route: eating and resting, sorting gear, readying for the high, frigid summit — and, naturally, creating excrement.

Now, for the first time, the National Park Service is requiring climbers below 14,000 feet on Denali's western flank to carry all human waste off the mountain in small portable toilet cans.

Above that level, climbers can dump feces and toilet paper in just one designated crevasse below a camp at 14,200 feet, the next to last camp before the push to the 20,320-foot summit.

Rangers say the route's popularity is leaving a growing and potentially health-threatening legacy in the Kahiltna: literally tons of poop that began accumulating nearly 70 years ago and could start surfacing at any time.

"The emphasis is just trying to get as much waste off Denali as possible — safely," said Roger Robinson, the Park Service clean-climbing ranger who has spearheaded waste changes at Denali for years.

The 2018 season is already underway for some.

An Australian who reached Denali's summit on April 3 with a Welsh climbing partner made the first successful climb of the season. He reported minus-40 temperatures at the top.

A handful of Denali climbing teams were scheduled to arrive this week, with the initial big wave of check-ins scheduled for the first week of May, park spokeswoman Maureen Gualtieri said. There were nearly 800 people registered to climb Denali so far this season, but rangers expect that number to rise.

Under the new waste policy, teams must carry Clean Mountain Cans that resemble small bear-proof food canisters with straps that lock the lids down tight.

Full cans get carried down to base camp at 7,200 feet and flown via air taxi off the mountain for disposal at the National Park Service visitor center in downtown Talkeetna. A Valley company picks them up for disposal.

Until now, climbers had to carry the cans but tossed the waste in crevasses except on the very highest parts of the mountain.

Rangers patrolling this season will watch for violations, which could cost $100 to $250, officials say.

Terrell Moore and Jack Bynum — 22-year-old redheads who dubbed their team the Ginger Geminis — were expected to be the second team on Denali but climbing via the technical Cassin Ridge route that follows a 9,000-foot spine of rock and ice.

Along with the electric socks Moore hopes will save their feet — Bynum already has frostbitten his — and the high-tech GPS gear, the expedition includes a half-dozen green Clean Mountain Cans for use once the duo are back on the West Buttress.

The new waste rules are a good idea given the sheer number of people on the mountain, Moore and Bynum said later.

"It seems only fair that we try not to cover the mountain in poop with our weird superfluous desire to climb something," Bynum said.

The changes are based on fecally stunning research.

There are 68 to 103 metric tons (2,200 pounds per ton) of human waste on the West Buttress route, according to a 2013 technical report by National Park Service glaciologist Mike Loso and several others. An elephant weighs about one metric ton.

Dumped in pit toilets or in scores of crevasses or on the surface up high by altitude-fatigued climbers, the poop doesn't decompose or get ground down by glaciers, said Loso, a geologist at Wrangell-St. Elias National Park & Preserve.

The human waste in Denali's western glaciers is expected to start surfacing in 70 years and continue for more than 200, the research shows. Rangers say old garbage from prior climbs is already coming out now, so poop may be soon to follow.

Bradford Washburn, the renowned explorer and photographer, pioneered the West Buttress Route in 1951.

"It's like cryogenics. You freeze stuff and it doesn't die. It just hangs out," he said. "The waste is still gonna be nasty when it comes to the surface decades later."

The waste-hauling policy isn't the first for the National Park Service on the mountain: The park began requiring climbers to bring all waste down from high camp about a decade ago but still allowed crevasse dumping. Other changes date back decades.

Robinson, the clean-climbing guru, first attempted to climb Denali in 1975. He saw garbage everywhere: tents left behind, trash and worse tossed in crevasses.

"The human waste was just shameful. People would just go wherever they wanted. It was just piles of poo in lots of locations," he said. "At base camp by mid to late summer, unsuspecting climbers were getting intestinal issues from contaminated water because the waste was percolating."

The park service implemented a series of changes to address accumulating waste, including unwieldy bags and pit toilets, as far back as the 1980s. The cans came into use in 2001 and until now were used in most places to store waste before it was dumped in crevasses.

Robinson said the "incredible melt year" of 2005 put an end to the latrines when they all surfaced in disgusting piles.

The new policy requires each team on the mountain's West Buttress to take one green can — 12 uses each, on average — per person plus one extra. Other backcountry users on non-Denali climbs are given gray-colored cans.

About a third of Denali's West Buttress teams last year voluntarily participated in a trial run last season. Most of participants raved about the concept but some had issues with the practical aspects of what one dubbed "the luggable loo." Many cached full cans at an 11,000-foot camp to pick up on the descent, something the park service is recommending.

The agency is allowing dumping at 14,200 feet for now because of a difficult traverse around Windy Corner at 13,000 feet. Sleds loaded with heavy cans could pull inexperienced climbers off the trail toward open crevasses, rangers say.

Yes, Robinson noted, the dumped waste will migrate to a 300-foot ice cliff below and tumble 3,000 feet down to the East Fork Kahiltna. But at least exposure to the elements will help break it down.

Using helicopters to fly waste off at that altitude would be too risky, he said.

So Denali's rangers are still brainstorming new ways to treat waste at the 14,000-foot camp even as they prepare themselves for more surfacing waste to come.

"It's something we're going to be faced with for hundreds of years," Robinson said.