An accident took his legs, but Israel Hale found freedom on a snowmachine 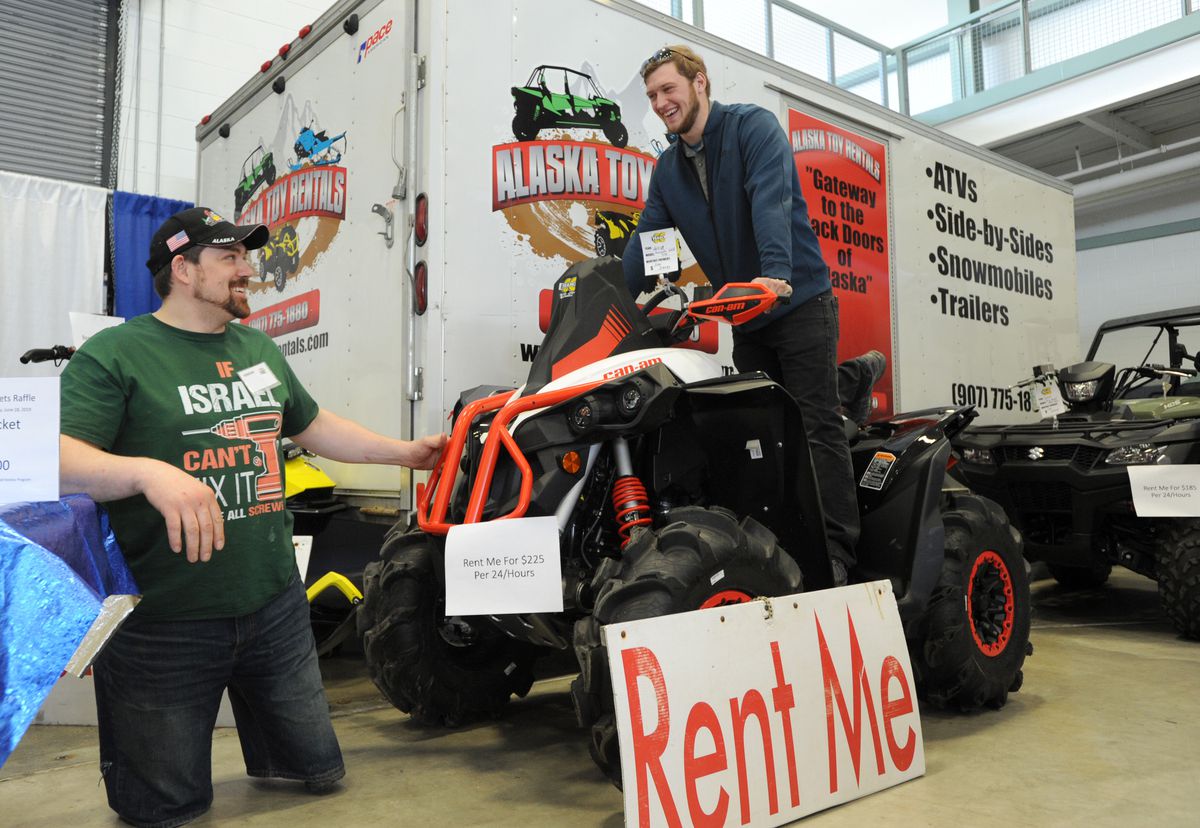 Israel Hale talks with Dallas Byler about a 4-wheeler Hale has for rent. Hale, owner of Alaska Toy Rentals in Palmer, had a booth at the Mat-Su Outdoorsman Show on March 22, 2019. (Anne Raup / ADN)

Israel Hale talks with Dallas Byler about a 4-wheeler Hale has for rent. Hale, owner of Alaska Toy Rentals in Palmer, had a booth at the Mat-Su Outdoorsman Show on March 22, 2019. (Anne Raup / ADN)

The hardest thing about riding a snowmachine when you have no feet, no lower legs and no knees, Israel Hale will tell you, is the most fundamental thing: Staying on the machine.

“I hug that steering wheel as hard as I do my wife,” he said.

Hale, 32, recently made history at the Valdez Mayor’s Cup, becoming the first double amputee to complete the race, which for semi-pro riders like Hale consisted of six trips around a hole-pocked 24-mile loop.

Race organizers said the March 19 race was held in some of the gnarliest conditions in its history. Pouring rain made for a bumpy ride on a course that included uphills, downhills and plenty of corners.

“The guy is unbelievably strong to hang onto that snowmachine with no legs,” said race director Curt Wilson. “I was blown away.”

Hale was one of 20 riders in the semi-pro class who started and one of 13 who finished. Even the 20-rider pro class, which featured several top Iron Dog racers, saw four scratches in the early going.

“Usually I don’t quit on anything, and I almost quit that last lap,” Hale said.

“Most guys have their knees and can stand up on the machine and take that shock. For me, I sit on the seat and it’s all upper-arm strength, not only to steer the machine but to stay on the machine. You’re constantly eating the handlebars.”

Hale completed the 144 miles in 5 hours and 27 minutes, but the residual aches and pains lasted for a couple of days. He felt it in his arms, his shoulders, his shoulder blades, even his fingers.

“It felt like someone ran me over in a truck,” he said.

And Hale pretty much knows what that feels like.

On a Sunday afternoon in September 2012, Hale and his wife, Cori, were in Anchorage to pick up supplies for the house they were building in the Butte area and to have dinner to celebrate six months of marriage.

As Hale drove his truck and trailer west on Dimond Boulevard, the trailer broke down. He got out of the truck was standing behind the trailer when a car hit him from behind. Hale’s legs smashed into the steel lip of the trailer and were nearly severed.

“When I woke up five days later in Seattle I thought I was paralyzed,” Hale said.

“When my wife told me I was missing both of my legs, what she said I said was, ‘That’s OK, I’ll figure out a way to walk.’

“Thereafter the depression did hit, when I figured out that super-agile, super-athletic, super-Mister-Do-Anything type person I was — I thought it was all over,” Hale said. “I was an avid hunter, I loved the outdoors, and I thought all of that was done, and that was very hard.

Hale, whose legs were amputated above the knee, spent six weeks in a Seattle hospital. For the first two years after his accident he used a wheelchair, unhappily.

He said he tried numerous leg prosthetics but every option left him frustrated and dissatisfied. In 2015 he opened a small-engine repair shop that required him to bend a lot, to climb up and down machinery, to sit on the garage floor. Leg prosthetics didn’t accommodate that kind of activity, he said, no matter how many sockets or legs he tried.

“I kind of almost came to the point of giving up on walking at all until I met someone who suggested walking on stubbies,” Hale said. “Ever since I’ve pretty much been on them.”

The stubbies are attached to Hale’s legs above the knee. They provide mobility and maneuverability for a man who has always lived an active life centered on the outdoors.

Hale grew up in a remote area outside McCarthy, one of 15 children in a family whose story was well-known in Alaska back in the early 2000s. Robert Hale, a fundamentalist Christian known as Papa Pilgrim, raised the children in a violent and isolated home with no books but the Bible. In 2002 he battled the National Park Service over his plans to bulldoze a road near the family’s spread in McCarthy, and in 2005 Robert Hale was sentenced for rape, coercion and incest. He died in prison in 2008.

Israel Hale grew up hunting, riding horses and working outdoors. After his accident, he yearned to do those things again but didn’t think he could. Then someone gave him a four-wheeler.

“That allowed me to get out and physically get into the woods, doing what I absolutely love to do,” Hale said. “That following year I was able to go bowhunting for the first time and I got my first moose after my accident. ...

"That was before I had prosthetics or anything. I was strictly in a wheelchair, and the four-wheeler allowed me to get the moose and get it out of the woods, pretty much by myself with my wife.

“It really gave me the freedom I wanted.”

Hale and his wife took the moose home and put it in their garage.

“I wrapped my legs up in black trash bags and duct tape because at the time I still had sores on the end of my legs, and I gutted the moose and dressed it out with my wife. I could have had lots of help, but I wanted to see if I could do it.”

He’s gotten a moose every year since, he said.

Once Hale discovered the freedom afforded him by a four-wheeler, riding a snowmachine wasn’t far behind.

Hale rides a Ski-Doo Summit 850 and always carries a satellite phone in case he gets separated from his group and gets stuck. He was tossed from his sled during the Valdez race and benefited from the kindness of another racer, Charlie Potter, who stopped to help him.

Riding with no feet or knees means his body has no natural suspension, Hale said, so all of the bumping and jarring is absorbed by his back. When there’s a big drop, the stubbies sometimes jam into his thigh and cause excruciating pain. The carbon fiber in the stubbies sucks in the cold, so he wears custom-made heated pants.

Getting stuck in soft, slushy snow is the worst. What he said would take an able-bodied person a minute to do takes him about 30 minutes: He gets down by the side of the machine and digs through snow and slush until he can get a shoulder under the machine and lift it enough to pack in snow.

“To be perfectly honest and without bragging, it’s very, very difficult, and it’s more difficult that anybody can know or imagine,” Hale said. “To be able to handle a machine with no pressure on the running boards is very difficult. It takes running the throttle and moving your weight in the right direction. It takes a lot of practice and a lot of skill.”

In late March, Hale and his brother Joshua were buried by an avalanche while they were snowmachining near the site of next week’s Arctic Man event in the Hoodoo Mountains near Paxson. Both were able to dig themselves out, and they want others to learn from their mistakes.

“I definitely am admitting to the fact that I made a mistake,” Hale said. “I wasn’t trying to be foolish. I did get a little overconfident."

Hale and Cori are the parents of two children — Greta is 4 and Levi 2 — and they own and operate Alaska Toy Rentals, a Palmer business that rents ATVs and trailers.

Friends and family finished building the house the couple had purchased lumber for the day Hale had his accident — the day when “the world was just crashed all at once,” Hale said.

Except Hale’s world didn’t crash. He figures the life he’s leading now is pretty much the life he would have had had he never been injured. When a person’s life gets hijacked by tragedy, Hale said, they “can get comfortable with the fact people feel sorry for them (or) they can go the other way and see what they can do in life.”

“Because you can’t change the situation," he said. "You can either make it worse, or you can make it better.”