Nome brothers are the first to summit Denali this season 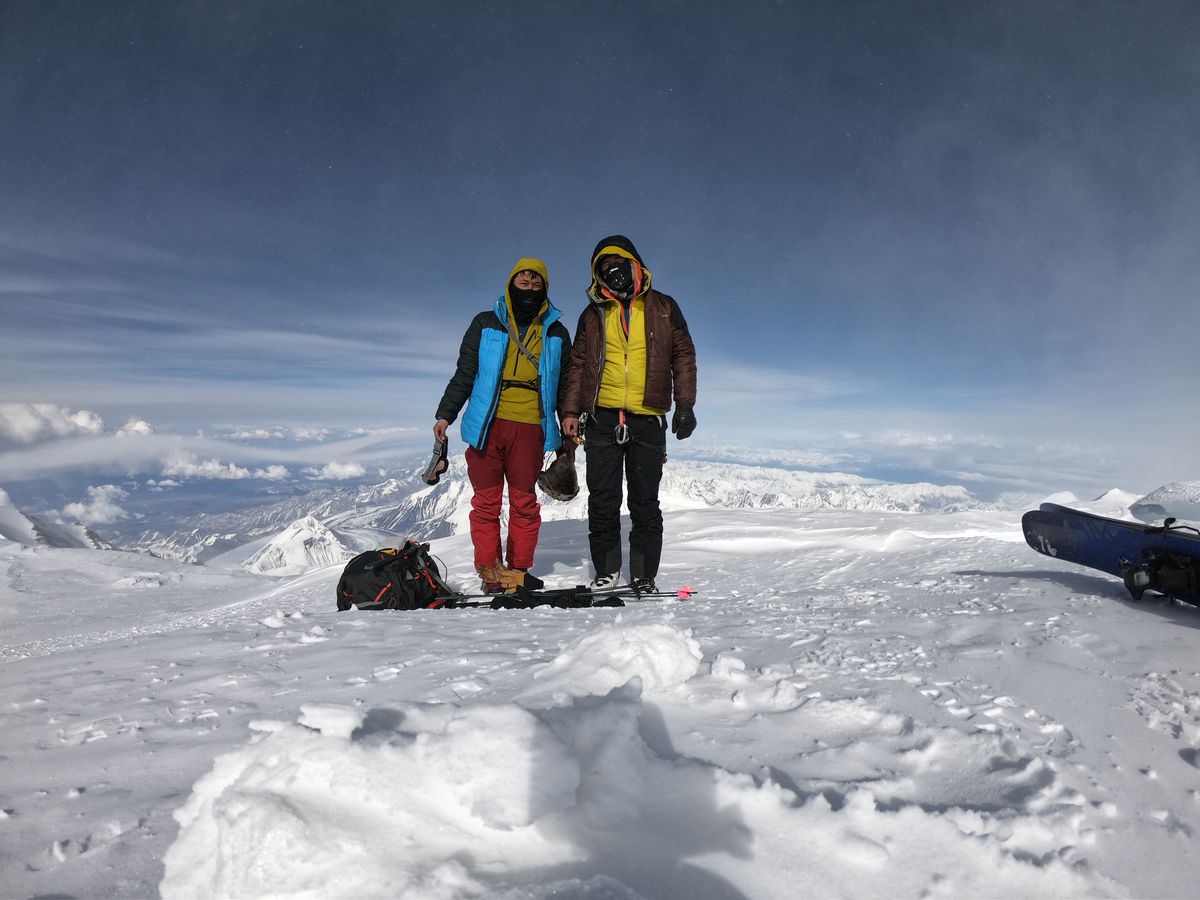 Wilson, left, and Oliver Hoogendorn on their recent climb of Denali. The brothers summited on Sunday, May 19, 2019. (Courtesy the Hoogendorn brothers)

Wilson, left, and Oliver Hoogendorn on their recent climb of Denali. The brothers summited on Sunday, May 19, 2019. (Courtesy the Hoogendorn brothers)

For a split second, a competitive impulse nearly got the best of Oliver and Wilson Hoogendorn.

When a member of their climbing team fell ill last spring more than three-quarters of the way up their Denali route, the group decided to abort its attempt to reach the summit.

But the Hoogendorn brothers had other ideas.

The team leader’s persuasion and the brothers’ own instincts toward self-preservation prevailed, and the group started its descent the next morning.

But at that moment, Oliver and Wilson started plotting their return.

A year later, they became the first alpinists of the season to summit North America’s tallest peak. After 15 days on the mountain, the Hoogendorns reached the summit Sunday, according to the National Park Service. They reached the top of Denali via the West Buttress route, the most frequently climbed route on the mountain.

“I think when we were sneaking out last year, that was impulse,” said Oliver, 21. “The more we thought about it in hindsight, we were glad we didn’t do it. Our friend was really sick. Once we got lower and saw him stop coughing and feel better, we knew it was the right thing to do. But Wilson had written out a list of gear we needed that same night and I was thinking of a workout plan.”

Their climb this season initially looked like it might meet a similar fate. After reaching 9,000 feet on their first day, the duo was snowed in for nearly four days.

The brothers were passed by a couple of groups at around 17,000 feet, but icy temperatures and blustery winds forced the other groups back down. At that point, the brothers relied on their Nome pedigree to plow through in the frigid conditions.

“We were up there and people were coming down from 17 and saying it was too cold and windy,” he said. “We already had it in our head we had to be ready to be cold and accept that fact. Being from Nome, you’re just used to it when you’re ice fishing and snowmachining. Just being able to gather yourself inside your head and tell yourself you’re going to be all right. But our feet and hands got really cold. The tips are really cold still.”

For the most part, the brothers’ trip went smoothly until they reached the summit ridge at around 19,500 feet.

“All of our water froze and we’d only eaten a Pop Tart and we’d climbed for 4-5 hours,” Wilson said. “We were so thirsty and tired, and our heads were foggy from the elevation. We got to the summit ridge and I didn’t know if we should go all the way. We were breaking trail because we were the first up there. I asked Oliver if we should turn around and he said no.”

“It feels like someone drugged you,” Oliver said. “Your head feels swollen and you can’t think straight. You wonder what you’re doing up there.”

Reaching the summit was the culmination of more than a year’s worth of planning, training and waiting.

“It wasn’t so much of being the first as it was about finishing and having the weight lifting off our chest," Wilson said. “We told ourselves we were going to do it, and it felt so good that be at that marker.”

Wilson said the brothers definitely pushed each other on the mountain, but also realized when to hit the brakes.

The unspoken communication that often takes years to develop between climbing partners was there from the onset, Oliver said.

“It’s so convenient,” he said. “Verbal communication is so inconsistent. If he was to say he was fine and I could tell he wasn’t, it’s really helpful. Being able to communicate without talking was one of the best things.”

Before Denali the brothers were, at best, mountaineering novices. The winter before their first attempt, they climbed Mount Osborn, which extends to nearly 5,000 feet in the midst of the Kigluaik Mountains north of Nome.

“We started running a lot in high school,” Wilson said. “We’d drive out 30-40 miles, we’d run 15 miles. That sparked a flame and we started thinking of other ways of going places. We bought a pair of skis, and in the spring we’d go out around Nome. We thought, what if we skied Denali? It was kind of a big jump but it felt right.”

Not surprisingly, the Hoogendorns’ mother was among the happiest to hear her sons had reached the top and returned back safely.

“Everyone was worried, it seems like, but we had a GPS and they could see where we were,” Oliver said.

Once they reached the top, there was still the difficult descent, a ski down the mountain that elicited both excitement and trepidation.

When the brothers arrived back in Talkeetna, they were surprised to see a sizable gathering at the Sheldon Air Service hangar, which included both locals and international mountaineers.

“We didn’t think it would be such a big deal to be the first to summit” this season, Wilson said. “We got back down to the hangar, and they had music playing and fresh water and cookies.”

Locals said they were especially excited because it was the first time in recent memory that Alaskans had been the first in a season to summit the mountain. Among those who attempt to summit Denali each year, Outside climbers vastly outnumber in-state mountaineers.

“Now that we’re in the new generation of climbers, it was noteworthy that two Alaskans reached the summit first,” said Holly Sheldon Lee, owner of Sheldon Air Service.