You can hunt sandhill cranes, or you can just stand there and watch them in awe 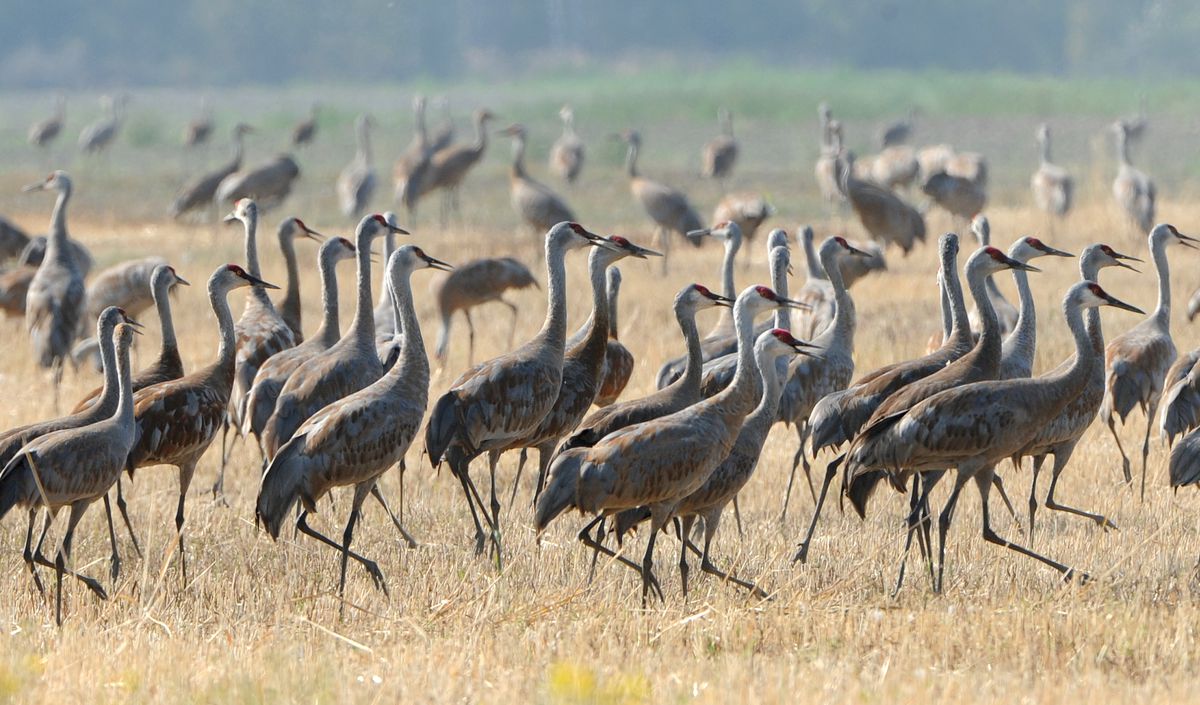 Sandhill cranes feed on farmland along Inner Springer Loop in Palmer as they prepare to migrate south for the winter. (Bill Roth / ADN)

Sandhill cranes feed on farmland along Inner Springer Loop in Palmer as they prepare to migrate south for the winter. (Bill Roth / ADN)

Hunters come, surely, but more stand transfixed at the sight and sounds of these expressive birds. Delta residents know well to use care in the grocery and post office parking lots as folks stare skyward, oblivious to traffic.

These birds, with their seven-foot wingspans and resonant calls, are incredibly impressive. More than that, there is something about their single-minded focus that reaches deep inside us all.

Sandhill cranes are legal to hunt in Alaska and all along the Central Flyway except Nebraska. They require duck stamps and steel shot.

Alaska hunters can take three per day. Many Delta fields are private and restricted to hunting unless permission is given or paid for, but there are plenty of open lands. Cranes can be hunted successfully in timbered areas as they approach feeding areas or are leaving.

Migrating birds are partial to harvest barley fields and will land there in the thousands. It is best to leave these feeding birds be. Cranes are almost impossible to put the sneak on, because of their height (four feet), and binocular quality eyesight. Use the field birds as decoys and hunt in the trees on the approach to the fields. You can hunt as far as a mile from the field.

A few years ago, I crawled into a field that had maybe 30 cranes feeding on the far edge. I covered myself and the dog, Kip, with straw and waited with two shotguns — a three-shot Winchester pump and an old Mossburg single. The plan was to jump up and shoot at the first low flock with the pump and then use the Mossburg for a long-range shot.

The best-laid plans. Cranes came in from an unexpected direction and touched down just out of range. More came, then still more. Soon, there were a couple thousand birds walking around me, some at 10 or 15 yards. The noise was deafening.

I couldn't bring myself to jump up and shoot. I decided to wait until some impatient dude on the side of the field spooked the birds. I would be in great position with my two guns ready to go and holding an extra shell for the Mossburg between my teeth. I felt like Davy Crockett.

The cranes finally jumped — as did the dog and I. I got one shot off with the Winchester and that was it. But I did get one crane. I have been more successful since, but nothing has been quite as memorable as those cranes walking around me with both Kip and I shaking with awe.

Cranes are slow flyers and relatively easy to bring down, but they are big birds that look closer than they really are. Fifty yards is an easy shot if you’re loaded with good #2s or BBs. But 50 yards is tough to judge with a crane. If you can see their eye blink, that is within range.

The couple hundred thousand cranes that migrate through Delta end up in the Nebraska sandhills along the Platte River, which is how they got their name. Chicks, called colts, will stay with their parents for 10 months. Some of the old birds can live to be 15. The young can be recognized by their reddish brown backs. The adults have more gray, except for some rust stains from peat bogs where they feed.

In spite of hunt pressures and the threats of habitat loss, lesser sandhill cranes are expanding their range. There are natural predators such as foxes, coyotes and eagles, and ravens and gulls get eggs and some colts. Cranes can be quite formidable in defense of nests and young.

Sandhill cranes are a successful breed. Fossil records show them to be one of the oldest extant breeds. There is one fossil dated at 10 million years of age that is thought to be the same bird that we have today. There is a confirmed record 2.5 million years old. This bodes well for the future of these impressive migrants.

Most of the cranes have now passed through Delta, stopping for a short rest while they tighten flocks and get another full meal before launching skyward on the next leg of their journey. They can ride thermals to 20,000 feet before coasting to the Canadian grain fields farther south. Three hundred and fifty miles is just another day's run for a crane.

They will have to run the hunters gauntlet in Saskatchewan and the Dakotas, but there will always be those folks like me who stand wide-eyed and forget to shoot.