Whether gathering, splitting or whittling it, wood is good for the soul 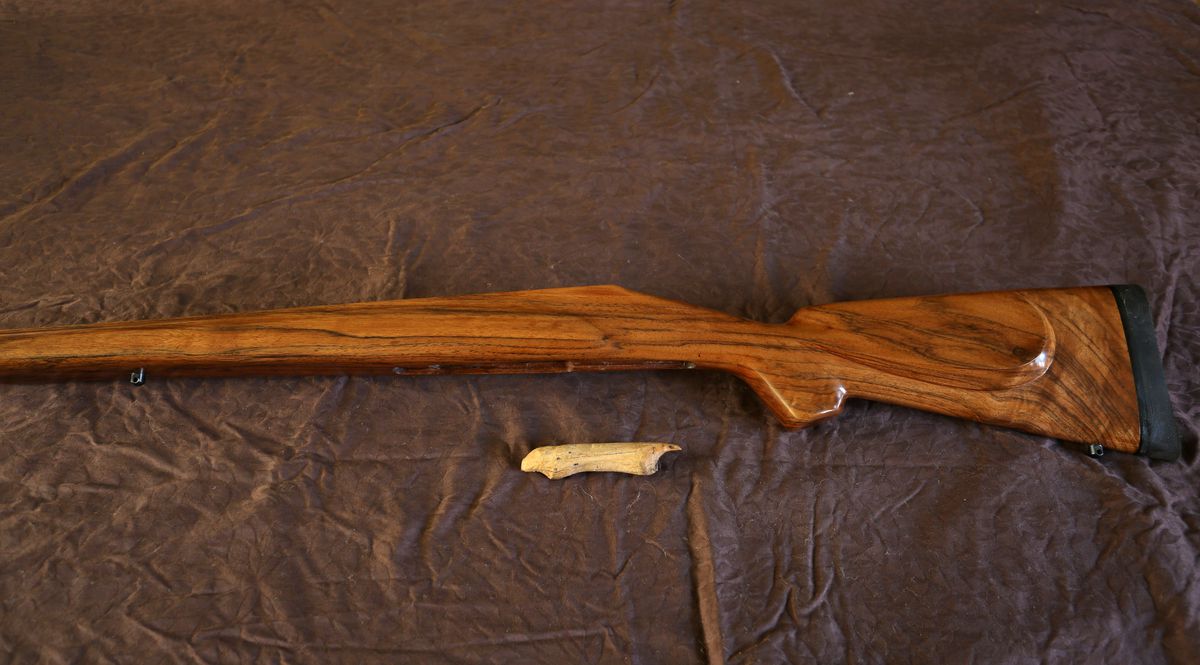 The “wiener dog” looks rather pathetic next to a stock Steve Meyer built, but at the time it provided a diversion. (Photo by Steve Meyer)

The “wiener dog” looks rather pathetic next to a stock Steve Meyer built, but at the time it provided a diversion. (Photo by Steve Meyer)

“What do you think?” I said to my hunting partner as I reached across the tent to hand him the piece of wood I had been whittling. He looked at it for a minute and said, “It looks like a hot dog with a tail.”

Well, I thought, at least I’m in the ballpark. It was supposed to be a wiener dog, and didn’t he notice the legs? “I thought it was just a lumpy hotdog,” he said.

We were on an impromptu caribou hunt in mid-December, a surprise opportunity for some winter meat. The plan was a quick trip through Lake Clark pass to a small lake where the pilot would drop us for two days.

The weather window appeared good but brief. It held and we got our caribou the next morning. A storm had arrived around midnight, and we woke up draped in nylon. The wind had blown the tent flat, and rain mixed with snow came in blasts.

A midnight move up to a couple of stunted black spruce, where we anchored the tent, left us comfortable and waiting. Not an unusual turn of events in Alaska and a situation hunters prepare for.

Except for this time, I didn’t. The books I had set out to bring along were right where I left them, along with the coffee, when I returned.

Repeat reading of books is normal for me. It seems I always find things I missed the first time. Not so much with a bread sack, the only reading material we had; ingredients are not that fascinating, particularly with a caffeine withdrawal headache.

We hadn’t brought cards, another staple for passing time. We were reduced to the options of staring at each other, neither of us being attractive enough for that to last long, or napping. My partner had no trouble napping; sort of like a damn dog, he could sleep anywhere. I cannot. I was the weird kid in kindergarten who sat up and stared at everyone else who was drooling on their mats at nap time. I’m sure the teacher was relieved when my class moved on to first grade.

Usefulness is a critical element to the human condition, and I struggled with what I might do to pass the time in a productive way when I remembered there were some small dead limbs where we dug out for the tent. I went out and found a couple of them, and with my pocket knife was ready to weather the storm and be useful.

It was while digging around the shop for wood scrapers and checkering tools, thinking I would do some long-overdue stock re-finishing and re-cut some checkering while enduring the sequester time between hunting and fishing outings, that I came across the “lumpy hot dog” I had forgotten about.

While reminiscing over the awful carving, the significant role wood has played in my life occurred to me.

As a toddler, the first chore I remember was from outings where there was a campfire. I would run around picking up small sticks for tinder and the biggest sticks I could carry once the fire was started. It wasn’t a chore; it was a delightful occupation for a kid to be useful and enjoy the results of the labor.

The gathering of firewood and tending the campfire remains one of life’s genuine pleasures. I enjoy camping where others have been before us and the area appears picked clean of fuel for a campfire. The challenge to find wood and keep the fire going is a worthy course.

While growing up, my father always had some sort of winter project that involved gunstock work. He would re-finish old stocks or build custom stocks from semi-inletted and shaped blanks. I watched his every move, and by age 10, I was re-finishing stocks of my own.

Factory finishes on wood stocks being what they are, you can almost always find beauty in the wood grain hidden beneath the finished surface of walnut. The hours and days spent in front of the woodstove hand-rubbing an oil finish into a favorite gunstock and watching as each coat brings out more character in the wood is reward enough for the effort.

That led to learning to inlet, shape and checker gunstocks, and a lifetime of bringing out the best in pieces of wood for myself and on occasion others. In a rewarding twist, the person who brought this craft to me — my dad — later requested I build a stock for one of his big-game rifles.

There is a cathartic quality to working with wood that can be found most anywhere. The cutting, hauling, splitting and stacking of firewood is particularly therapeutic, not to mention the heat it provides.

A day spent on snowshoes, finding suitable trees, felling them and hauling them out by sled and willpower, brings satisfaction that may be unmatched in the world of working with your hands.

While it isn’t a cerebral endeavor, it isn’t mindless either. Felling the tree where you want it is challenging at times. The splitting of wood becomes a bit of a science and an art form. Years of experience lends one the ability to look at a chunk of wood and figure out where the knots are and where to strike and split with the splitting maul.

And there are health benefits. Spend a day cutting, hauling, splitting and stacking a cord of firewood, and you’ve had a full-body workout in the outdoors, where ventilation is as good as it can be, and there is no charge for the realism.

For the rural residents of the Scandinavian countries, firewood is their lifeblood. They have perfected the methods of gathering, splitting, stacking, drying and burning firewood to the degree that wood smoke pollution is minimal. It is a highly valued cultural aspect of their society.

In Scandinavia, it is said that the way to choose a partner is to look at their woodpile. It will tell you all you need to know about them at a glance. If your woodpile is anything but neat, clean and dry, you might spend a lot of years alone in a place where wood is as important as food.

I doubt I’ll ever forget to bring a book on a fly-in hunt again, but if I do I’m sure there will be a chunk of wood to whittle, maybe one large enough to give the next wiener dog real legs.