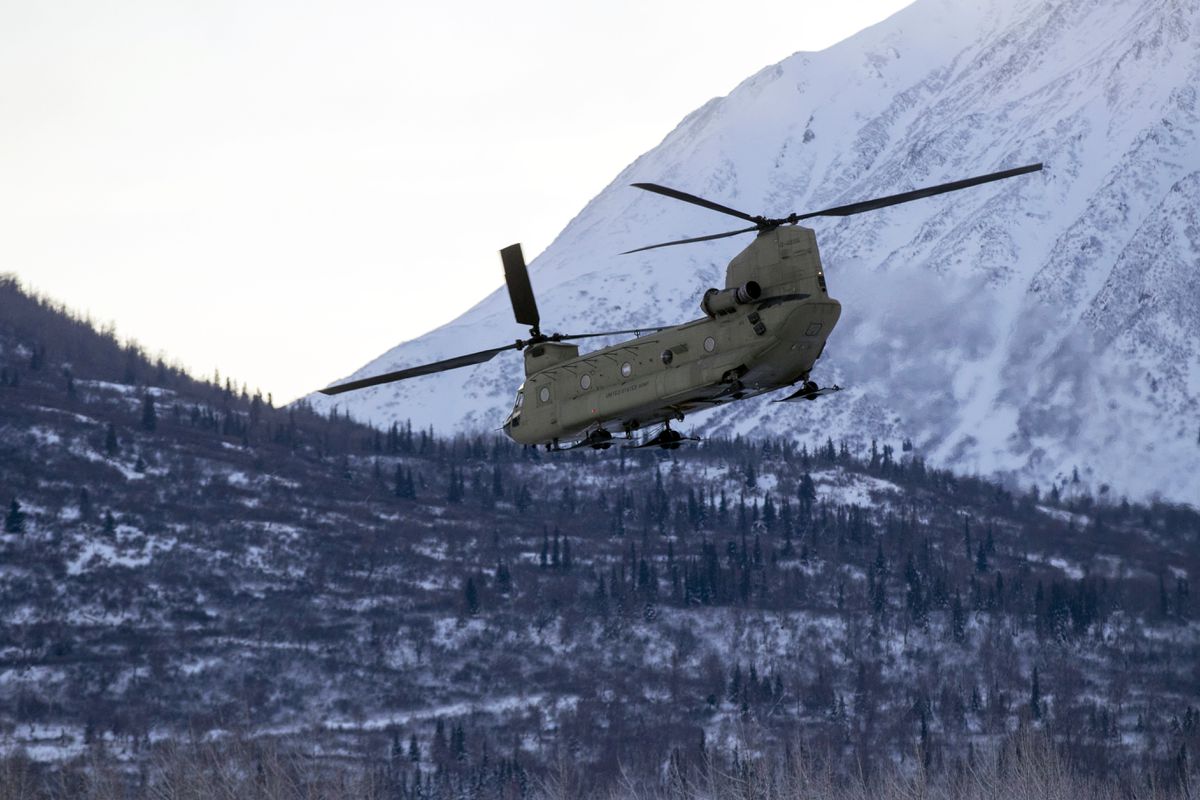 The Alaska National Guard rescued 12 stranded mountaineers off a glacier in Wrangell-St. Elias National Park on Tuesday after four days of foul weather halted attempts to pick them up or drop supplies.

The crew landed the helicopter on the glacier at about 10,000 feet around 4:45 p.m. Tuesday and loaded eight mountaineers, four guides, and approximately 1,000 pounds of gear, officials say. An onboard medic treated two mountaineers with symptoms of altitude sickness and a third with frostbite injuries described as minor.

The group was at about 14,000 feet when the altitude sickness set in, according to Lt. Col. Michele Edwards, former commander of the unit involved in the rescue and now the state Army Aviation Officer for the Alaska Army National Guard.

The rescue hinged on a guide on the ground with a satellite phone working with a Guard tanker above the site to provide the most updated weather information at the landing zone, said Edwards.

“In Alaska, the weather reporting and web cams are so few and far between,” she said. “The connected effort ... made it a lot more efficient so we could make sure we found the weather window.”

The expedition was booked through St. Elias Alpine Guides, based in McCarthy. A St. Elias representative who answered the phone Tuesday morning said all their guides were back. Company owners did not respond to a request for comment.

In a separate rescue also held off by weather, two New York state men were picked up early Monday from the mountainous site of a plane crash in the remote reaches of the park.

The mountaineering rescue began just before 8 a.m. Saturday, according to the Guard. That’s when the National Park Service received an inReach personal locator beacon notification reporting “high-altitude sickness and adverse weather conditions” and asked for support from the Rescue Coordination Center.

Initially, the guides hoped to evacuate the two mountaineers with altitude sickness and return to the expedition with the rest of the group, Aspelund said. But howling winds and snow prevented their Ultima Thule Lodge pilot from reaching them.

Continued high winds, snowfall and low visibility over the glacier prevented the helicopter from reaching the group despite multiple attempts, the Guard said.

On Sunday, the crew tried twice to drop medical supplies to the mountaineers to tide them over until medics could arrive, but poor visibility and 60 mph winds prevented the plane from guiding supplies to the drop zone, Aspelund said.

That evening, the coordination center put in a request for “high-altitude, heavy-airlift” support. The 1st Battalion, 207th Aviation Regiment dispatched the Chinook.

The crew of the large helicopter, working out of Gulkana Airport and forward deploying to McCarthy Airport, made more than 20 attempts to find alternate routes through the weather before reaching the group, according to the Guard.

Gulkana Fuel, based near Glennallen on the Richardson Highway, probably provided 2,500 gallons of fuel for the Chinook mission, according to operations manager Bob Tubbs. Plus the company gave crew members rides between the airport and their lodging for the night 10 miles away.

It was a relief to see the rescue completed, Tubbs said.

“The wind was pretty bad,” he said. “They had some pretty torrential wind and weather to deal with.”

The Chinook, generally capable of holding at least three dozen passengers, is a familiar sight at Denali National Park and Preserve, where the aircraft are used to help set up high-elevation base camp.

The Army National Guard has only had the Chinook in its fleet for a few years, officials say.

Despite the size of the group involved, Tuesday’s rescue was not the Guard’s largest overall. That distinction goes to the evacuation of 26 people from Rainy Pass Lodge during wildfires in July 2019.