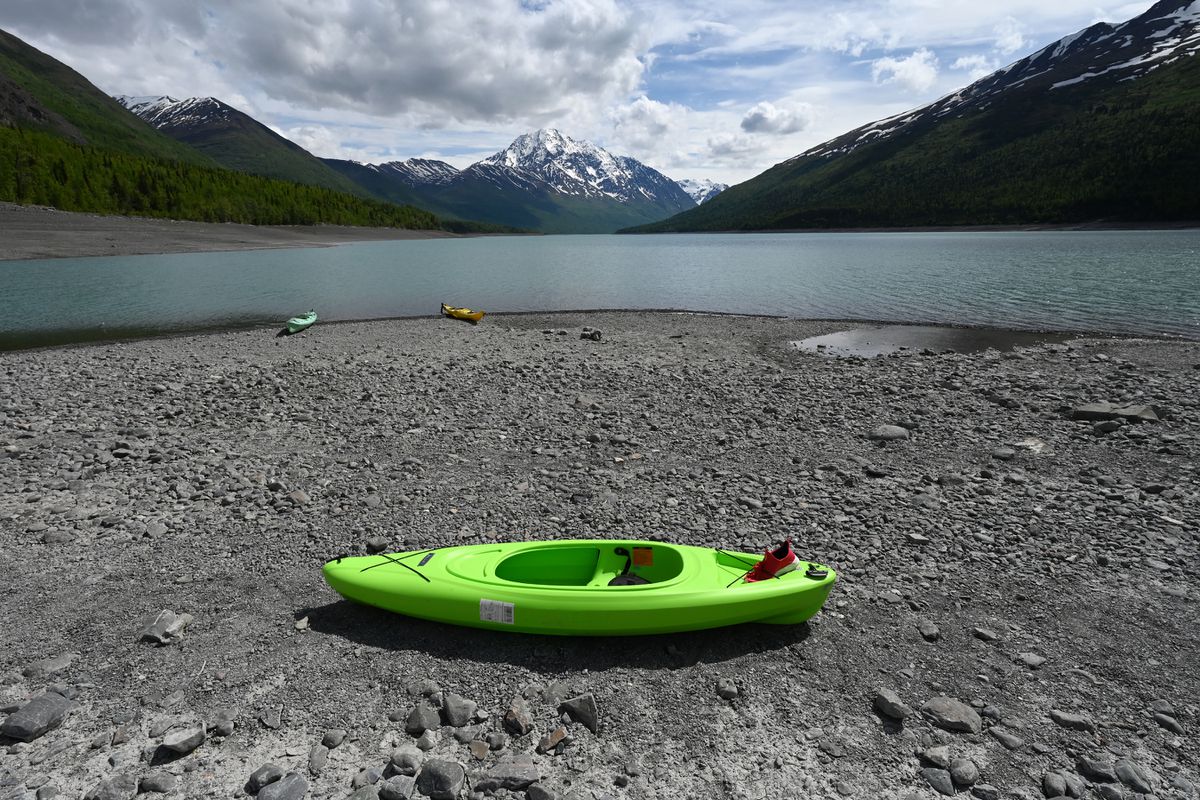 A recreational kayak rests on the shore of Eklutna Lake on Thursday, June 10, 2021. The kayak is believed to have been the one used by a kayaker who was rescued a couple days earlier when it overturned. (Bill Roth / ADN)

A recreational kayak rests on the shore of Eklutna Lake on Thursday, June 10, 2021. The kayak is believed to have been the one used by a kayaker who was rescued a couple days earlier when it overturned. (Bill Roth / ADN)

When Dan McDonough heard that a woman had fallen into Eklutna Lake last week, he knew what to do.

McDonough, the owner of Lifetime Adventures kayak rentals, gathered up warm clothing and went to wait by the shoreline. One of his employees had seen the woman fall out of a small boat without a life jacket on and hopped into a kayak to come to her aid, he said.

The woman clung to the bow of the kayak as they headed toward shore around noon on June 8, McDonough said. When they were close, McDonough said, he helped grab the woman and bring her to shore.

He’s seen his share of people falling from their boats or overturning in kayaks during the last 30 or so years that he’s worked on Eklutna Lake. But lately, McDonough said he has seen more people fall into the cold water without wearing personal flotation devices or having a plan to save themselves.

Chief Tim Benningfield of Chugiak Volunteer Fire and Rescue said the department has been called to three rescues on Eklutna Lake during a three-week period. There’s no normal number for how many water rescues the department does each year on the lake, but Benningfield noted that the number is a high point in the ebb and flow of responses.

Eklutna Lake, about a 40-minute drive from Anchorage, is 7 miles long and fed by freshwater and glacial streams. It’s popular for hiking, biking or kayaking because of its turquoise waters and beautiful mountain views, Chugach State Park ranger Ben Corwin said.

Because the lake is so accessible and popular, Corwin said, people often let their guard down. But weather on the picturesque lake can change quickly, and a bluebird day can quickly bring overcast skies with heavy winds, causing big waves that can take kayakers or boaters by surprise.

Because the lake is glacially fed, the chilly water poses a significant safety threat to anyone who may fall into the water, Benningfield said.

[Kodiak friends celebrated a birthday on a pink flamingo raft. Wind swept it into Monashka Bay.]

Ice remained on the lake until about May 10 this year. Just a few days later, the department was called to help two kayakers who had overturned. After a long winter, Benningfield said, it seems like some people have been overeager to get on the water.

Response times at Eklutna Lake take longer, too. There’s no cell service at the lake, so the ranger station has to be notified of an incident to phone rescue crews for help, according to Benningfield. And once the call for help is placed, it’s still about 20 to 25 minutes until first responders are able to get to the lake with a boat in tow.

Sometimes, the stranded people are pulled to shore by other boaters, but that’s not always the case. On May 26, two women were stranded in the 38-degree water for about an hour after their kayak overturned, Benningfield said. The women were both taken to nearby hospitals, where they were evaluated for hypothermia and exposure.

Cold water immersion can quickly cause swimming failure from a loss of muscle coordination. Benningfield said both of the women were wearing life jackets but had been unable to reach shore.

Sometimes, other boaters are able to reach stranded people in the water, Benningfield said, and responses from the department require ATVs to reach sections of the shore to bring people back to safety and get them medical help if needed.

Not every person exposed to water in Eklutna Lake needs advanced care, McDonough said, and not every rescue prompts an emergency response.

“If someone has a lifejacket and is out with another person, frequently they’re able to get themselves out of the water and you will never hear about it and it’s not necessarily a life-threatening event,” he said. “We’ve seen people tip and watch them do the right thing, get to shore within 10 minutes, and we’ve been prepared but they’ve been totally fine — they were doing everything right and knew if that happened what to do.”

McDonough said he’s seen boats on the water lately that are not made to handle conditions in places like Eklutna Lake. When weather conditions turn, smaller boats or kayaks meant for use in calm conditions can easily overturn.

“I don’t know whether people understand that not every boat can go on every type of water safely. So many stores from Costco to Walmart to Target are selling little play boats that are perfectly fine in Mirror Lake or Goose Lake and not so fine in the wrong conditions on Eklutna Lake,” he said.

The biggest safety key, McDonough said, is simply having a personal flotation device and wearing it. He’s seen people bring a life jacket with them but not wear it, and after they overturned in their kayak, they weren’t able to find or reach their life jacket — rendering it useless.

It’s also important to pay attention to the weather conditions and be prepared for an emergency situation before going out on the lake.

“A part of the preparedness would be to have extra layers that aren’t wet that you can slip on really quick,” Corwin said. “A little bit of extra water and some granola bars might be nice to help warm you up.”