Elusive 5th Iditarod win: Why so many mushers have tried and failed 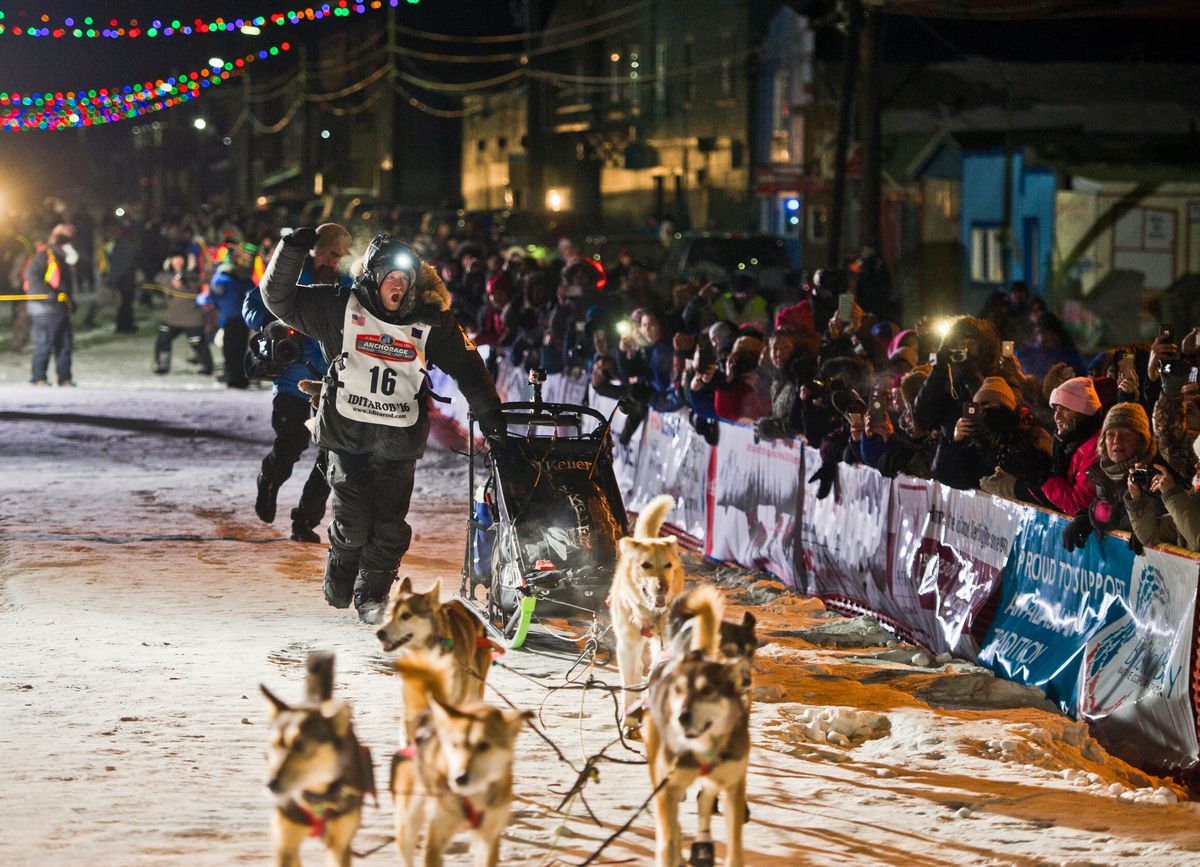 Ever since Rick Swenson earned his fifth Iditarod victory 26 years ago, there has been an almost mystical cap at four victories among champion mushers.

At least so far.

Reigning Iditarod champion Dallas Seavey will take his first swipe at a fifth victory next week, at the young age of 30, already basking in the status of an Iditarod boy wonder as both the youngest and fastest champion.

But will he break through that four-win ceiling?

Seavey's win in 2016 put him in an elite group of five other four-time Iditarod champions  — the late Susan Butcher, Martin Buser, Jeff King, Lance Mackey and Doug Swingley. Those five are some of the world's greatest long-distance mushers, all members of the Alaska Dispatch News Iditarod Hall of Fame. Yet a fifth win remained out of reach for them despite a combined 37 attempts at it.

Alaska Dispatch News spoke with three of the four-time Iditarod champions this month about the fifth victory, as well as the husband of Butcher, the race's first lady, who notched her four victories by age 35. While their answers varied, they all agreed there's nothing mystical about the fifth win. There's no hex, no wall.

To get to Nome first, King and the other mushers said, almost everything has to go right. It takes a superior dog team. It takes confidence. It takes talent. It takes a certain number of puppies each year. It takes good kennel help, good sponsors and good weather. It takes a single-minded focus on winning.

And then, you have to be better than everyone else out there in a competition that has shifted from a multi-week endurance race to a long-distance sprint.

"If you want to win any race in this sport now, you have to devote all winter and focus solely on that," said Lance Mackey, a 46-year-old cancer survivor who dominated the Iditarod with an unprecedented four consecutive victories from 2007 to 2010. "There's so much competition, and so many people want it as bad as any of us."

Mackey said all the pieces fell together for his years of winning, plus "a pinch of luck," before he ran up against hard times that stole some of his focus and his motivation, including a multi-year divorce and health problems. Some of his key dogs retired too, including Larry, who led the Fairbanks musher to three Iditarod victories and left the team in 2009.

Mackey won the 2010 race with the core of his old team, but since that victory, his best finish has been 16th. He scratched from the 2016 Iditarod and will not compete this year, although he says he'll return.

When it comes to keeping a winning streak alive, Mackey said, part of it comes down to how well you balance the new duties that come with a championship. Once he won the Iditarod, Mackey said, his life changed. He was thrust into the spotlight and people began asking him to do speaking events, give presentations, attend dinners and more.

Everyone wanted a piece of him, he said, but committing to an event meant missing time with his dogs.

"Once you get three or four or even one victory, it's easy to kind of fall off. You get pulled in different directions, and they consume your time and your motivation," Mackey said.

"If I get a weekend away from not racing to do a speaking engagement, that's one strike against me and an obstacle to overcome."

King, 61, won his four Iditarods over 14 years. Next week he'll start his 27th race to Nome, and he's not giving up on a fifth win.

"I take some satisfaction in Tom Brady pulling it off," King said of the New England Patriots quarterback whose fourth-quarter performance led to a Super Bowl victory this year.

"I'm going to take Brady's advice and not be discouraged by being behind at half-time, and I'm going to kick it in gear for the fourth quarter," he said. "That's the way I like to run dogs."

Not long ago, King was on the brink of a fifth win until Mother Nature turned his race upside down. He said he was running a "perfect race," leading the 2014 Iditarod, less than 30 miles from the Nome finish line, when a fierce ground blizzard forced him to shift his plans and end his race entirely.

"I was a heartbeat away," King said.

When it comes to winning the 1,000-mile race, he said, "Once is amazing, twice is incredible, three is just mind-boggling and four is near mythological. So the fifth is something out of this universe."

King has missed only one Iditarod since 1991.

Every year the competition grows, he said, and a race that once had only a few top mushers jockeying to win now has an array of elite teams. One wrong move, and you drop several places.

"The fact is that there's just way more wonderful teams out there. So the competition is keener and that will make the fifth one tougher," King said.

But he said he hasn't "grown old" since 2014 and could still put together a dog team capable of winning the race, though "it's just a matter of do I want to."

To try to win you have to give things up — time with friends, time with family, other hobbies.

"We all get to make choices," King said one evening in February. "I'm drinking mimosas and headed to the hot tub."

Over time, the Iditarod has sped up.

Buser looked back to the years in the 1980s when Swenson and Butcher competed for victories. At their best that decade, they ran somewhere between about an 11-day and a 12-day race, and then the race got faster. Much faster.

"(Swenson and Butcher) won so many races with their genetic material and then they got outrun. They literally got outrun by superior dogs and then a new era got ushered in," Buser said.

In the 1990s and early 2000s, the next era of champions jockeyed for first. Buser, King and Swingley ran somewhere between a 9-day and an 11-day race, with Buser slipping under 9 days in 2002 to set a new record.

"Then we got outrun by superior athletes, both two-legged and four-legged," Buser said.

Nowadays, mushers win the Iditarod in just over half the time it took Swenson to score his first championship in 1977, when he reached Nome in 16 days, 16 hours and 27 minutes.

Last year, the top eight mushers finished the Iditarod in under 9 days, a record. Last-place finisher Mary Helwig's time of 13 days, 8 hours, 51 minutes would have won 10 past Iditarods, including three of Swenson's. An 11-day time would have secured 47th place last year. A 13-day time would have put the musher in contention for the red lantern that goes to the final finisher.

To win the Iditarod, Buser contended, you have to have a "single-minded focus." It's something he didn't have every year, juggling other life events and spending time with family. Buser won the Iditarod in 1992 at age of 33, then again in 1994, 1997 and 2002.

He has run the Iditarod 14 times since his last championship, placing in the top 10 four times and 37th last year.

"I probably had many other things going on in the last 15 years that I thought were every bit as important or even more important than winning the Iditarod," Buser said.

"I built another house. My family is very important. I spent a lot of time with my kids before, during and after college. All of those things are part of the lifestyle that I had that probably hindered me from winning yet one more Iditarod. No regrets, though."

Buser, 58, will return to the Iditarod in 2017 and said he still hopes for one more win.

Buser, King and Seavey are the only four-time champions in this year's Iditarod.

Susan Butcher retired at age 39, after her 1994 race, to have a family with husband and fellow musher David Monson. She would die of leukemia at age 51.

In her 17 years racing the Iditarod, Butcher put together an impressive record, with wins in 1986, 1987, 1988 and 1990. She placed in the top 10 in all but two races — once when she scratched after a moose stomped her dog team, and in her rookie year, when she placed 19th. She placed second four times.

She almost won her fifth Iditarod in 1991, leading the race until a blizzard drove her back to the White Mountain checkpoint less than 80 miles from the finish line. Swenson mushed into the storm, sometimes walking in front of his dogs to locate the trail, and emerged from the iconic race with his fifth win.

Butcher was third, just behind Buser.

Sometimes, just a little bad luck can derail a race.

Monson said it would not surprise him if Seavey won several more times, describing the Willow musher as focused, talented and not prone to mistakes.

"He has youth on his side, which is a big deal," Monson said. "My feeling is Dallas will win it many more times than five."