When will the 2017 Iditarod start? (And answers to 14 other race questions) 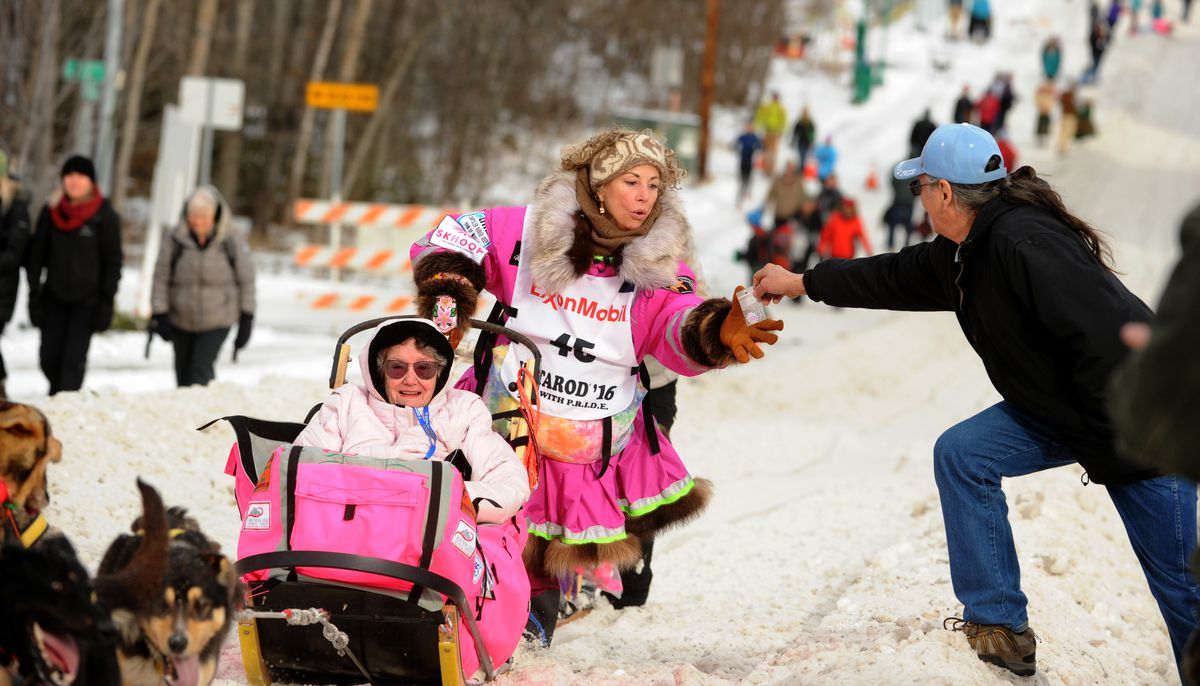 DeeDee Jonrowe accepts a pair of earrings on Cordova Street during the ceremonial start in 2016. (Bob Hallinen / ADN)

DeeDee Jonrowe accepts a pair of earrings on Cordova Street during the ceremonial start in 2016. (Bob Hallinen / ADN)

The start of the 45th Iditarod Trail Sled Dog Race is just days away.

As mushers and their sled dog teams prepare to dash to Nome and spectators prepare to follow their journeys, the Alaska Dispatch News prepared answers to a few questions about how the race works and what we might expect this year.

It begins with an 11-mile ceremonial start on Saturday, March 4, at 10 a.m. in Anchorage. Mushers and their teams will take off from Fourth Avenue, near where it intersects with D Street. They'll turn onto Cordova Street and drop down the hill to Mulcahy Stadium before snaking their way along city trails and ending their run at the Campbell Airstrip in Far North Bicentennial Park.

Two days later, the official race begins in Fairbanks on Monday, March 6, at 11 a.m. If temperatures stay low, teams will start on the frozen Chena River near Pike's Landing. If it warms up and the river ice melts, the race will move to a nearby road.

Teams will leave the starting chute one by one, at two-minute intervals. People can park at the Carlson Center where shuttle buses will leave for the start beginning at 8 a.m., said Lanien Livingston, Fairbanks North Star Borough spokeswoman.

2. Why is the race starting in Fairbanks and not Willow?

Despite the dozens of inches of snow that dropped on Anchorage this winter, Iditarod race officials said in February that stretches of the trail early in the route, near the Rainy Pass checkpoint in the Alaska Range, remained impassable because of too little snow and open water. They moved the official start from Willow to Fairbanks for the third time in race history. Iditarod mushers last raced out of Fairbanks in 2015.

Compared to the route from Willow to Nome, the trail west from Fairbanks is flatter and involves more running on frozen rivers. The route through Interior Alaska is also prone to brutal cold and gusty winds.

Here's a very basic breakdown of the route: Mushers and their teams will follow the Tanana River from Fairbanks to Nenana to Manley Hot Springs before hitting the Yukon and following that river to the villages of Tanana, Ruby and Galena. They will then head overland 82 miles north to Huslia, a village with a rich history of racing dogs.

It's generally accepted that the Iditarod is a 1,000-mile race, however the actual measurements of the route show it's slightly shorter.

The website notes that the distances are estimates and the actual trail changes year to year based on conditions.

(And just how far is 1,000 miles? If you drive from Philadelphia to Orlando or Portland to Los Angeles you'd be in the neighborhood. In Alaska, it's like driving from Seward to the small city of North Pole and back).

5. How many teams will race this year and who are they?

This year's race field includes five previous Iditarod champions, 17 women and 55 men. Ten mushers list their hometown as somewhere outside of North America, including Otto Balogh of Budapest who will become the first Hungarian to race the Iditarod. Fifty-two mushers listed their hometown as a community in Alaska.

6. Did Balto run the Iditarod?

Nope, the fabled Balto was one of the sled dogs in the 1925 serum run to Nome. A relay of 20 mushers and about 150 sled dogs transported antitoxin from Nenana to Nome, where a deadly diphtheria epidemic threatened to decimate the gold-mining town. Balto was the lead dog on the final portion of the relay.

Decades later, Joe Redington Sr. and Dorothy Page decided to start a sled dog race over the historic Iditarod trail, which once served as Alaska's primary artery for ferrying supplies and mail. They ran two shorter races between Knik and Big Lake in 1967 and 1969 before holding the first race from Anchorage to Nome in 1973.

While there are parallels between the serum run and the Iditarod, Redington, known as the "Father of the Iditarod," started the long-distance race to promote sled dog culture during a time when snowmachines started to phase out sled dogs. He also started the race to preserve the historic Iditarod trail between Seward and Nome, according to the Iditarod's race history.

The entry fee alone was $4,000 this year, but that doesn't include the thousands of dollars in other costs including transporting the sled dog team to the ceremonial start and race restart, purchasing gear, supplies and food for the race and shipping some of those items, packed in "drop bags," to checkpoints along the trail.

It's a nylon sack that mushers fill with dog food, people food and supplies. About two weeks before the start, mushers haul dozens of these bags to designated spots to get them postmarked, weighed and sent off to the far-flung checkpoints.

This year, it cost them 64 cents a pound.

Once the teams get to the checkpoints, they'll likely find the bags, labeled with their names, lined up outside for retrieval. For the dogs, the bags often include frozen beef, frozen fish and kibble. For the mushers, they often include vacuum-sealed bags of food.

Mushers must start the Iditarod with at least 12 sled dogs, but no more than 16. At the finish, mushers must have at least five dogs pulling their sled.

They cannot add sled dogs along the trail, but they can leave them behind at checkpoints with veterinarians and volunteers (the race calls these dogs "dropped dogs"). Mushers choose to drop dogs from their teams for a variety of reasons, including injuries and poor performance.

At their own expense, mushers can designate where they would like the dogs flown, according to race rules. But many dogs wind up in Anchorage where friends, family or dog handlers pick them up.

10. Do dogs ever die during the Iditarod?

Yes, dogs have died during the Iditarod.

In 2016, four-time Iditarod champion Jeff King's 3-year-old dog Nash died when a drunk snowmachiner slammed into the sled dog team on the Yukon River outside of Nulato.

Before that a dog hadn't died while racing since 2009.

In 2013, one dog that was left at a checkpoint died after it was buried by snow in a storm. Since then, the Iditarod has provided shelter for dropped dogs.

11. How often do mushers stop along the trail?

The Iditarod requires its mushers to make three mandatory stops.

Mushers typically rest their teams many more times at checkpoints and along the trail during the race. The top mushers attempt to create a run-rest cycle to maximize their teams' speed.

12. What do mushers have to carry in their sled?

The Iditarod requires each musher carry the following items: a cold-weather sleeping bag that weighs at least five pounds, an ax, a pair of snowshoes, dog booties, a veterinarian notebook, a cooker and pot that can boil at least three gallons of water at a time, enough fuel to boil three gallons of water, one cable drop line for each dog, non-chafing harnesses for each dog and a neckline, plus any promotional material provided by the Iditarod Trail Committee.

They also must carry an "adequate" amount of emergency dog food.

Race officials check for the mandatory gear at the official race start in Fairbanks and during each musher's 24-hour break. The race marshal and race judges can also decide to check gear at any other point at the race "at their discretion," except at the final checkpoint of Safety, according to race rules.

Yes, there are two significant ones.

The Iditarod Trail Committee Board of Directors lifted the ban on two-way communication devices, allowing mushers to carry cell phones and other electronics that can connect up to wireless Internet, like an iPod Touch.

The committee also decided to forbid mushers from carrying dogs in trailers pulled behind their sled. This has been a key race strategy for mushers including defending champion Dallas Seavey, who used a trailer to rest dogs during stretches of the race like a coach resting players on a bench during a basketball game.

If this year's race is anything like the last one that started in Fairbanks in 2015, the first musher will likely cross under the burled arch in Nome sometime early Wednesday, March 15.

The Iditarod Trail Committee said on Monday it's still determining the winnings for 2017.

Last year, Iditarod champion Dallas Seavey won $75,000 and his pick of a new Dodge vehicle. His father, who placed second, earned $62,775. The totals decreased gradually from there. Every finisher receives at least $1,049.

Anything we missed that you would like to know about? Email Iditarod race reporter Tegan Hanlon at thanlon@alaskadispatch.com.