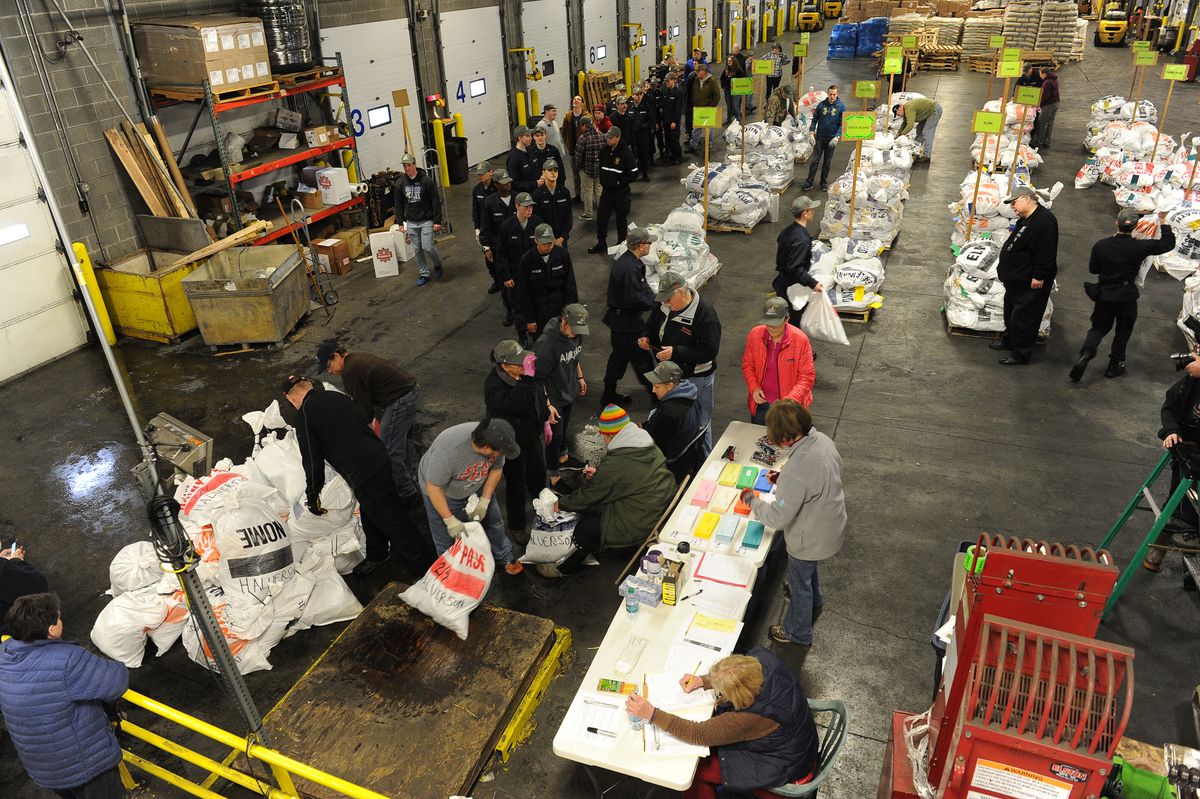 Mushers bring their food drop bags to Air Land Transport Inc. on Wednesday. The bags are weighed, tagged and put on pallets to be shipped to checkpoints on the trail. (Bob Hallinen / Alaska Dispatch News)

Mushers bring their food drop bags to Air Land Transport Inc. on Wednesday. The bags are weighed, tagged and put on pallets to be shipped to checkpoints on the trail. (Bob Hallinen / Alaska Dispatch News)

Iditarod musher Nathan Schroeder has learned a lesson in his four years of packing bags to ship to race checkpoints scattered across Alaska: Avoid plastic.

Schroeder said he discovered that one year after packing plastic forks, knives and spoons in his nylon bags. When he reached checkpoints and got ready to eat after traveling hours on the trail, he found they were all broken. He got by, he said, but he now sticks to metal cutlery.

The Minnesota musher Wednesday stood inside a vast warehouse in Anchorage for his fourth food drop, the annual Iditarod logistical dance in which mushers haul dozens of bags to designated spots to get postmarked, weighed and loaded into refrigerated trucks — and eventually onto airplanes.

At a cost of 64 cents per pound, the bags are delivered to checkpoints along the Iditarod trail for mushers to retrieve upon arrival. They can contain utensils, dog food, human food, extra booties, extra clothing, hand warmers and more.

The shipping can get expensive when you're sending more than 2,000 pounds.

Nicolas Petit of Girdwood spent $1,429 on Wednesday to send off 56 bags, mostly filled with kibble and a frozen beef mixture chopped into small blocks for the dogs, he said. Petit said a friend packed him homemade meals in vacuum-sealed bags. He also brought hand warmers and handfuls of snack-sized Almond Joy candy bars.

"They're for convenience," Petit said. "They're easy to eat."

Iditarod race marshal Mark Nordman estimated that each musher packs between 1,400 and 1,500 pounds in their drop bags, if not more. After last week's announcement that the official Iditarod start would take place in Fairbanks instead of Willow, Nordman said race officials sent mushers a list of the new checkpoints and where the bags once destined for the traditional route would now go. Bags labeled "Skwentna," for instance, will go to Manley.

Mushers interviewed Wednesday afternoon, including Mats Pettersson of Sweden, said the switch to Fairbanks had not really affected their packing.

"I'll give my dogs the same things," Pettersson said. "What you have to change is schedules."

Pettersson arrived in Alaska two weeks ago and began packing what he would need to fuel him and his dog team throughout the race. For his dogs, Pettersson prefers to feed them frozen fish. For himself, he packed rice, chicken and pasta. He also packed some cinnamon-bun-flavored ice cream.

With the river route out of Fairbanks prone to brutal cold, he is hopeful it won't melt.