Veterinarians check Iditarod dogs’ health ahead of the race 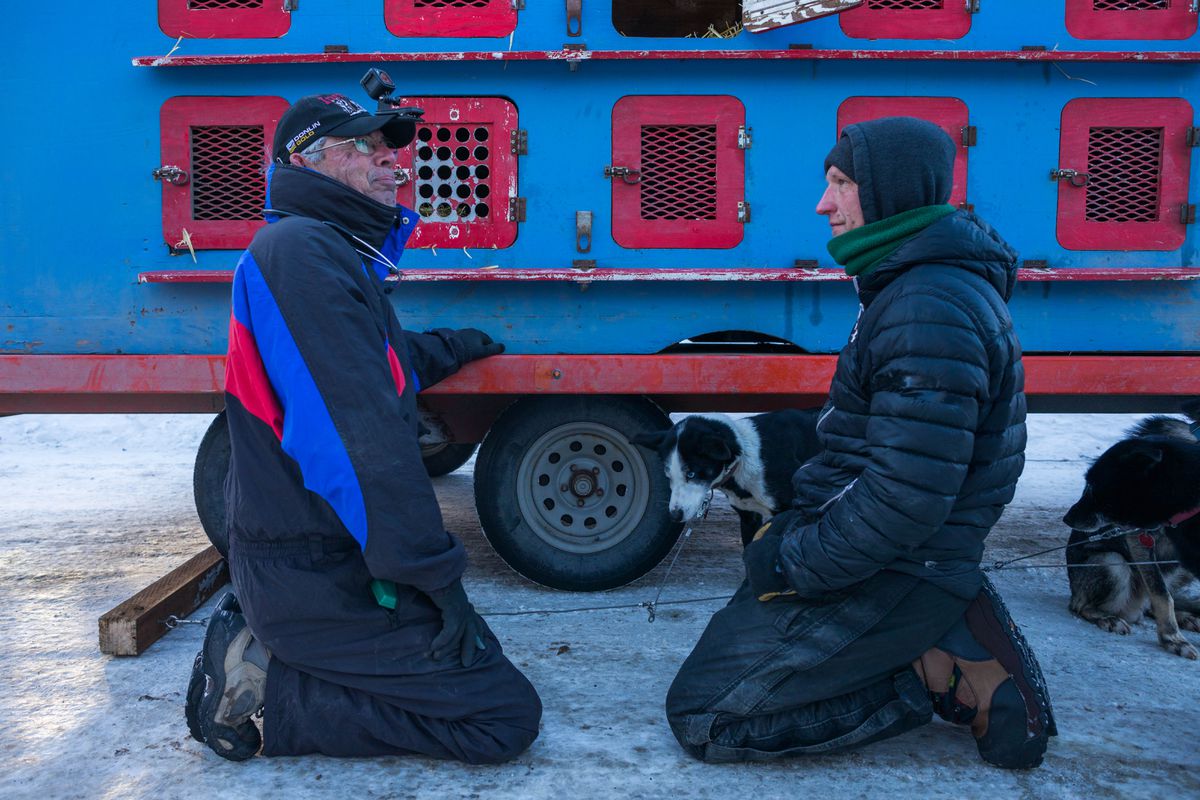 Norm Griggs squatted in the snow on Wednesday morning, lifting the lips of a sled dog so he could check its gums. If they're pale pink, it could indicate the dog is anemic, explained the veterinarian. If they're tacky, the animal may be dehydrated.

He unwrapped the stethoscope from this neck to listen to the dog's heart and lungs before moving his hands firmly across its legs to check its muscles and assess its flexibility.

"These dogs are rock solid," Dr. Griggs — a volunteer Iditarod Trail Sled Dog Race vet — said during Wednesday's vet check, the final chance mushers have to get mandatory dog physicals done before the long-distance race to Nome that begins in Anchorage on Saturday.

[When will the 2017 Iditarod start? (And answers to 14 other race questions)]

Griggs wore a snowsuit and Iditarod baseball cap as he moved from dog to dog, calling out heart rates and microchip numbers to another volunteer with a clipboard.

Temperatures at the Iditarod race headquarters in Wasilla hovered in the low teens, but a strong wind picked up snow from the ground, swirling it in the air and making the air feel colder — much colder than the 82-degree day Griggs, a veterinarian of 37 years, left behind when he flew to Alaska from his home in Florida earlier this week.

The Floridian joins about 50 other volunteer veterinarians who will inspect the hundreds of canine athletes throughout the race. Stuart Nelson, the Iditarod's chief veterinarian, said only five of the vets live in Alaska.

The rest travel north from other states and at least three come from other countries. The veterinarians will staff the ceremonial start in Anchorage, the restart in Fairbanks and the checkpoints along the trail.

"Our goal is, obviously, to make sure these dogs are healthy every step of the way, as much as we possibly can," Nelson said.

For the Iditarod, that means requiring each dog have up-to-date vaccinations, including one for rabies and one for kennel cough, and a microchip implanted under its skin. The tiny chip, about the size of a grain of rice, is programmed with an identification number.

All dogs participating in the race must also have their blood drawn and an electrocardiogram taken of their heartbeats to make sure they're strong enough for the 1,000-mile trek.

Then comes the head-to-toe physicals performed by volunteer vets like Griggs. Dogs must also be dewormed within 10 days of the start, using Iditarod-approved medication.

Nelson said mushers can have a maximum of 20 dogs go through the physical exam, a team they'll have to whittle down to 16 by race day.

Mushers can also choose to go to a private vet for the required care, but the race provides it at no extra cost outside of mushers' $4,000 entry fee, Nelson said.

[Nearly a century after Balto's serum run made the husky a celebrity, he will return to Alaska]

On Wednesday, mushers pulled up to Iditarod headquarters with large trailers carting their dog teams for the provided physicals. They stood outside talking to tourists who flocked to the area that morning. Vets made the rounds in the order mushers arrived.

Matthew Failor, of Willow, brought about 35 sled dogs from his kennel, half for him and half for his dog handler and Iditarod rookie, Michael Baker. As he waited for a vet, Failor held a blue binder filled with papers in clear sheet protectors, each documenting one of his dog's vaccinations and health history.

"We're obviously racing dogs but there's a whole health side of this thing that I don't think a lot of people understand," said Failor, who will run his sixth Iditarod this year and who placed 61st last year. "It's just like owning a farm, you have to take care of your animals."

On the trail, the vets will continue to check the sled dogs.

If all mushers start with the maximum 16 dogs, 1,152 dogs will run from the Fairbanks start line on Monday. Nelson estimated vets do about 10,000 exams on the trail, checking the dogs' general health. At each checkpoint, a vet must sign a musher's "vet book," a small journal that documents the sled dog team's health, Nelson said.

The Iditarod is also trying portable EKGs this year, sending six tiny devices out with vets who can place them on a dog's chest to record its heart rhythms and inspect it for irregularities.

But because the devices work with an iPhone application, Nelson said he was skeptical about whether the tech can withstand the bone-numbing cold of Interior Alaska and whether the villages would have enough bandwidth to support the operation.

"It could turn out to be more complicated than the value," he said. "We'll see how it works."

The veterinarians will also take urine analyses throughout the race to check for dog doping.

"It's like any high-profile athletic event, whether human or equine or canine. We have prohibited substances that are pretty consistent across the board, across species — stimulants, painkillers, anti-inflammatories," Nelson said.

The Iditarod race rules list about a dozen prohibited drugs.

Nelson said vets collect urine at the race ceremonial start in Anchorage, at the official start in Fairbanks and then randomly sample dog teams along the trail. In Nome, veterinarians also collect urine from dogs racing in each of the top 20 teams, he said.

The Iditarod overnights the samples to a lab and receives results in 48 to 72 hours, Nelson said.

Nelson, who has worked as the chief race veterinarian for 22 years, said it was "very rare" to find a prohibited drug in a dog's system. If the tests did detect one, the results would be sent to the Iditarod Trail Committee to determine "how that should be handled," he said.

He said he only remembered one case five or so years ago when a team farther back in the pack tested positive for Rimadyl, a nonsteroidal anti-inflammatory drug like aspirin. He said he did not remember the outcome.

Nelson said he hoped the constant, looming possibility of urine testing would continue to deter mushers from doping dogs.

"Obviously we're out there checking and looking so it would not be wise to attempt anything," he said.

By Wednesday evening, Nelson said all of the dogs checked at Iditarod headquarters passed their physical exams. But vets were still reviewing the EKG and blood test results, which would ultimately determine who was fit enough to start the race to Nome on Saturday.