Deja vu? Get ready for another Seavey vs. Seavey finish 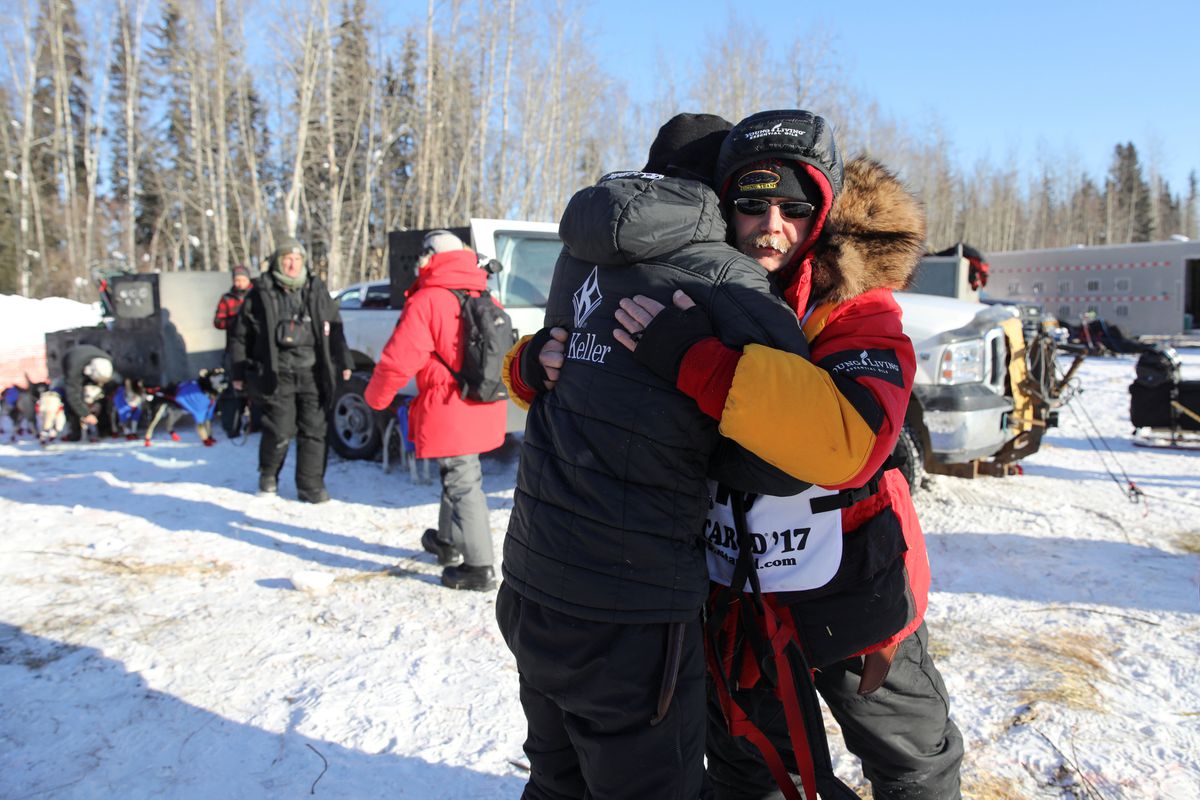 Two-time champion Mitch Seavey hugs his son Dallas Seavey (a four-time champion) before they both race at the official restart of the 2017 Iditarod Trail Sled Dog Race in Fairbanks on March 6. (Nathaniel Wilder / Reuters)

Two-time champion Mitch Seavey hugs his son Dallas Seavey (a four-time champion) before they both race at the official restart of the 2017 Iditarod Trail Sled Dog Race in Fairbanks on March 6. (Nathaniel Wilder / Reuters)

The chance of this year's Iditarod being another record-breaker is looking like a strong possibility, but it won't be the record that first comes to mind.

Breaking the Iditarod speed record is unlikely, seeing that the lead pack will depart Koyukuk at about the same time 2015 champion Dallas Seavey did the last time the Iditarod started in Fairbanks.

The record looking like it could be broken once again was set just four years ago, when Mitch Seavey became the oldest musher to win the Iditarod at age 53. Mitch, now four years wiser, looks to be in the driver's seat of the 2017 Iditarod. He arrived in Koyukuk on Saturday 14 minutes behind race leader Wade Marrs but made the run from Huslia to Koyukuk 53 minutes faster, based on their running times.

The final member of the lead trio arrived just 11 minutes after his father, but Dallas Seavey was 73 minutes slower than his dad on the run over from Huslia.

All three mushers have arrived at a nearly perfect time to take their eight-hour break, and we will most likely see the trio depart Koyukuk within 25 minutes of each other early Saturday evening.

However, in an interview with Iditarod Insider, Mitch Seavey said he did not declare his eight-hour break, leaving us wondering if he'll pull the snow hook during the warmest part of the day — and whether that will pay dividends?

A big question is what does Marrs, who is leading the two fastest teams in Iditarod history, have left in the tank versus the Seavey Train.

[Now an Iditarod musher is going all rogue on us. Thanks, Wade Marrs.]

Mitch and Dallas have both been carrying one to four dogs the entire race.

By contrast, Marrs has been a vocal opponent of the practice of rotating dogs and resting some. He argues that the intent of Iditarod was not to have dogs finishing the race that only ran 800 miles of the trail, but that all dogs finishing in Nome should have run the entire 1,000 miles. Now he's head-to-head with the two racers who've mastered the art of strategically rotating animals.

Both Seaveys reached Koyukuk with two dogs resting in their sleds, and you can expect them to continue their dog-taxi service all the way to Kaltag, taking advantage of hard, fast trails over the next 70 miles. In Kaltag, both Seaveys will most likely switch to their lighter sleds and push across the Kaltag Portage to the Bering Sea Coast, with their remaining team on the line.

The run from Kaltag to Unalakleet will show what 650 miles of rotating dogs has accomplished. If Marrs and Mitch take the exact same rest from Koyukuk to the finish in Nome, Seavey will arrive four hours ahead of Marrs — based on the 0.7 mph difference in their teams' speed. With Seavey still carrying multiple dogs and posting faster run times, we can only assume he will speed up once this carrying strategy ends, probably over the next 70 miles.

That leaves Marrs just one option — cut rest and maintain speed, something very difficult to accomplish.

In an interview with Iditarod Insider, Marrs recounted his last 200 miles of racing, rattling off run times and mileage distances that a well-rested brain would have difficulty remembering. It was evident that Marrs, one of the youngest competitors in the race, is still thinking clearly, which might be the most dangerous weapon anyone can have on the final push into Nome.

While Marrs and the Seavey duo have separated themselves from the rest of the pack, the race is far from over.

We need look no further back than 2014, where a horrific storm pounded the final 80-mile stretch into Nome and Dallas Seavey, who was 10 hours behind in Kaltag, passed Jeff King and Aliy Zirkle on the way to his second championship.

Seavey's victory was one of the largest — and perhaps the most unlikely — come-from-behind victory in Iditarod history. The memory of it offers hope for the chasers.

But after the impressive performance that the Seaveys delivered on the Bering Sea coast last year — top competitor Brent Sass' team, struggling to keep up, refused to leave White Mountain — it seems unlikely a come-from-behind victory over this lead trio is in the offing.

The two mushers with a chance are Joar Ulsom of Norway and Nicolas Petit of Girdwood. Ulsom, now two hours, 30 minutes behind Marrs, has always shown his steely resolve on the final push to Nome — and if there is a musher who can deploy a marching strategy, similar to what Lance Mackey and Robert Sorlie delivered on their championship runs, Ulsom is one of the few who could pull it off.

The only other musher within striking distance of the leaders is Petit, whose team was once considered the fastest in the race. But Petit has slowed considerably coming off his 24-hour rest in Huslia.

With no significant rest for Petit planned until the mandatory eight in White Mountain, it seems unlikely that the pride of Girdwood will be able to keep pace with Marrs and the Seaveys.

The big question remains: Whose monster is bigger? Father, son or the rabbit Marrs?

Jake Berkowitz is a three-time Iditarod finisher, including an eighth-place finish in 2013, when he was awarded the Alaska Airlines Leonhard Seppala Humanitarian Award. He has finished the Yukon Quest twice, both times in fourth place, and won the Rookie of the Year award in 2012. This is his second year of Iditarod commentary for Alaska Dispatch News.  Look for his commentaries daily during the race.