Zirkle, King and all of Nulato try to move past terrible memories of Iditarod attack 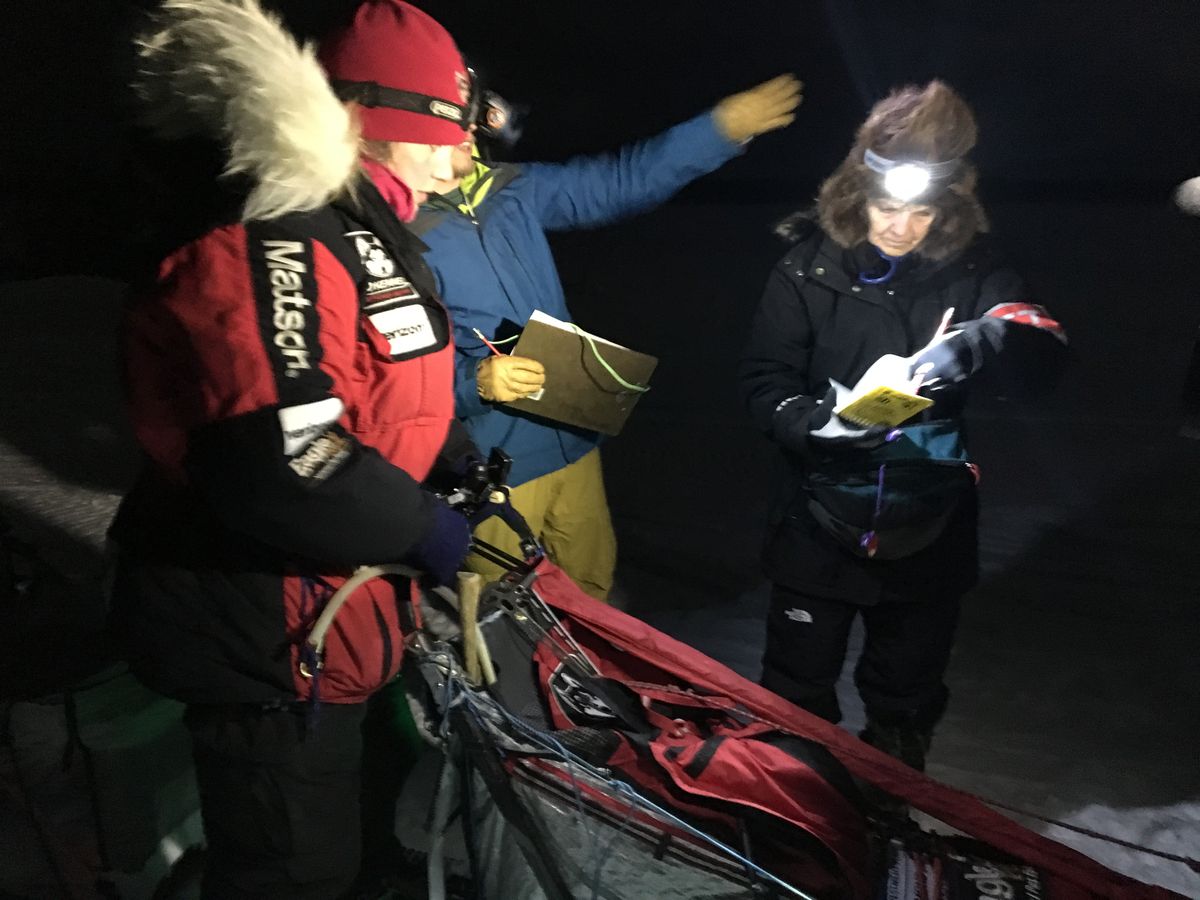 Aliy Zirkle stops for just a minute early Sunday morning in Nulato, the village where last year she reported that a snowmachiner had attacked her on the trail. (Tegan Hanlon / Alaska Dispatch News)

Aliy Zirkle stops for just a minute early Sunday morning in Nulato, the village where last year she reported that a snowmachiner had attacked her on the trail. (Tegan Hanlon / Alaska Dispatch News)

NULATO — Aliy Zirkle pulled up to the checkpoint here early Sunday with her bright headlamp reflecting off the vast, frozen river trail. Nearly all of her sled dogs wore collars that lit up the dark sky.

In an interview before the Iditarod started, Zirkle said she planned to make sure her team "lit up like a Christmas tree" while running atop the Yukon River ice.

Zirkle said she feared for her life that night on the river, and while she didn't think glow-in-the-dark dog collars would have rescued her then, they make her feel a little safer now, a little more visible.

Still, she didn't stop for long in Nulato Sunday morning. Even before the race started, she knew she wouldn't.

At 4:21 a.m. Sunday, Zirkle and her 13 dogs pulled up to the spot on the frozen Yukon River beside a couple of race volunteers and just down a hill from the community's school, where residents had stacked pans and pots full of food for mushers.

Zirkle arrived just after John Baker of Kotzebue, who left behind his dog named Rad, and after Mats Pettersson of Sweden, who decided to stay for a few hours and said he thought of his friend Zirkle the whole way into town.

A woman who works for Alaskans Changing Together, a statewide nonprofit that Baker and his fiancee — and fellow musher — Katherine Keith helped create, handed Zirkle about a dozen signs made by Nulato children, with messages of encouragement for the Two Rivers musher.

"Oh, very cool," said Zirkle, wearing her red parka, its hood with a thick fur ruff pushed off her head in the 10-degree weather. "That's kind of special, huh?"

Aside from that, the river around Zirkle was quiet. No one had gathered on the snowbank to cheer. It was, after all, the middle of the night.

Therapy and a 'pretty fantastic husband'

The Iditarod wasn't supposed to run through Nulato this year.

The trail alternates between two different courses. In even-numbered years, it passes through the village of nearly 300 and in odd-numbered years, like 2017, it doesn't. But with low snow and open water on early parts of the trail out of Willow, race officials moved the official start north to Fairbanks, and the trail again went through Nulato.

Zirkle said in an interview before the race that for a long time she wasn't ready to confront the stretch of river between Koyukuk and Nulato but there wasn't much choice anymore.

"I am headed that way — there's no ifs, ands or buts about it. And I'm not to the point that I'm ready to go 250 miles around that specific spot or around Nulato," she said in early March. "So I think I'll be going through it."

In December, the man on the snowmachine who hit Zirkle's and King's teams tearfully apologized to the two mushers in a Fairbanks courtroom. Arnold Demoski, a 27-year-old from Nulato, pleaded guilty to charges, including drunken driving, and a judge sentenced him to six months and three days in jail, plus probation and a fine.

According to an affidavit written by an Alaska State Trooper, Demoski hit the side of Zirkle's sled about 12 miles from Nulato, flipping two of her dogs. She grabbed a wooden trail marker to defend herself. Demoski drove away and approached again, passing close by the team. He revved his engine before driving off, leaving one of her dogs injured.

Since the attack, Zirkle said in the pre-race interview, she has gone to counseling and also attributed her recovery to her husband, fellow musher Allen Moore.

"I have a pretty fantastic husband, really supportive of me. No matter what hurdles and walls that I ran into in the past 12 months, he was there," she said.

Whether she will completely heal or not, she doesn't know. But she said it's taken a lot of work to get to her current state — racing the Iditarod with her eye on a win after three second-place finishes.

"I know that inside of me and in the back of my head, I will always be a different person because of what happened on the trail last year," Zirkle said in the interview. "But that's a person who can still win Iditarod."

A minute after Zirkle and her team arrived in Nulato Sunday morning, they were gone again.

"Well it's too bad I couldn't stay," she said, and took off into the dark.

Nulato prepares, hopes to move on

The day before Zirkle passed through the village here, the community hustled.

Residents had cooked for days to create a buffet for mushers filled with fruit salad, cake, moose stroganoff, moose burgers, salmon jerky, pasta salad, moose stew and more. Children decorated the school gymnasium for the incoming teams, taping colorful signs for each musher across the walls.

"We want to make sure everyone is fed and feels welcome, like they are at home," said Martha Turner, a 40-year-old city council member and Nulato tribal employee who has lived here all her life.

Nearly 300 people live in Nulato, on the bank of the Yukon River. They share 12 miles of gravel road. Everyone helps everyone. The school hopes to soon start its own sled dog team, Turner said.

"It's very welcoming," she said about her hometown, standing in the school gym after walking up from the snowy river where she watched the first mushers come in. "I love this community. We all pull together in a time of need. It's just beautiful."

Saturday evening, community members gathered atop the snowbank overlooking the river. Some were on the frozen river with Turner to cheer for the first sled dog teams arriving in the 20-or-so-degree temperatures.

Turner said the village wants to move forward after last year and she feels that they have started to.

"That was an eye-opener. A sad eye-opener," she said. "Everyone's been really good at taking care of our community now."

Since last year, Turner said, residents support each other more and check in on each other regularly — especially looking after the younger generation. The high school students have also stepped up to serve as role models for younger students, she said, "leading our community in a positive, sober lifestyle."

Turner is Demoski's cousin, and she said she can't answer for him or explain why he did what he did. But she said he has changed his life for the better.

"I think everybody has a time in their life when they've hit rock bottom, but it's all uphill from there. Everybody's been supporting him," she said, as her 11-year-old daughter begged her for permission to stay awake to watch Zirkle come into town.

Lawrence Esmailka, a 53-year-old born and raised in the village, hardly sat down Saturday.

He has run the checkpoint here for 28 Iditarod races, he said.

Esmailka walked around the school and showed visitors around, always encouraging them to eat — and then to keep eating more. Esmailka said he hardly had to ask for food this year; residents just cooked it and started ferrying pans to the checkpoint. That's what he loves about his hometown, he said.

"We all pull together as one," he said.

Esmailka said he is also a cousin of Demoski and did not want to talk too much about a year ago. He wanted to move forward, not look back.

Under sunny, clear skies at precisely noon Sunday, Jeff King of Denali Park arrived with 13 sled dogs. He said he planned to stay — at least for a little while.

"I knew they'd have hot water," King said as he dished out a water and kibble mixture to his dogs in 20-degree temperatures. "And I knew a few people would want to say hi."

When King, a four-time Iditarod champion, drove on the Yukon River up to Nulato last year, the snowmachine encounter happened quickly for him, like lightning, he said.

The fast-moving snowmachine driven by Demoski sideswiped King's team, killing one of his dogs, Nash, and injuring two others.

"My incident was over in milliseconds," King said in Galena on Friday. "It took a minute to even figure out what the hell happened."

King said he felt sorry for Zirkle, Demoski, his family, the village and himself, but he wanted to move on too.

On Sunday, he brought a 4-pound tub of animal crackers to the school gym. He said he wanted to share one of his favorite things with Nulato. It was something to talk about, "besides getting hit by a snowmachine," he said.

As King ate two hot dogs piled with beans and drank a bottle of Pepsi, he shook hands with three young boys who came up to say hello, and showed them the snack. He had "no hard feelings" and said the checkpoint had always been great.

However, when he rode into Nulato he said he remembered the exact spot where his race changed last year, and where he lost one of his lead dogs, 3-year-old Nash.

"I saw the spot and I told the dogs, 'Oh, yeah, pretty sure this is right where he hit us,''' King said.

Before King went back down to get his team ready to leave, he posed in the gym for a photograph with a group of residents, who laughed and cheered.

He left Nulato after 46 minutes in town.

On his way out, a crowd gathered on the river and up on the snowbank, where a woman yelled out: "Let's go, Jeff! Nulato loves you!"