Another sports doping mystery: Who slipped the painkiller to the Iditarod dogs? 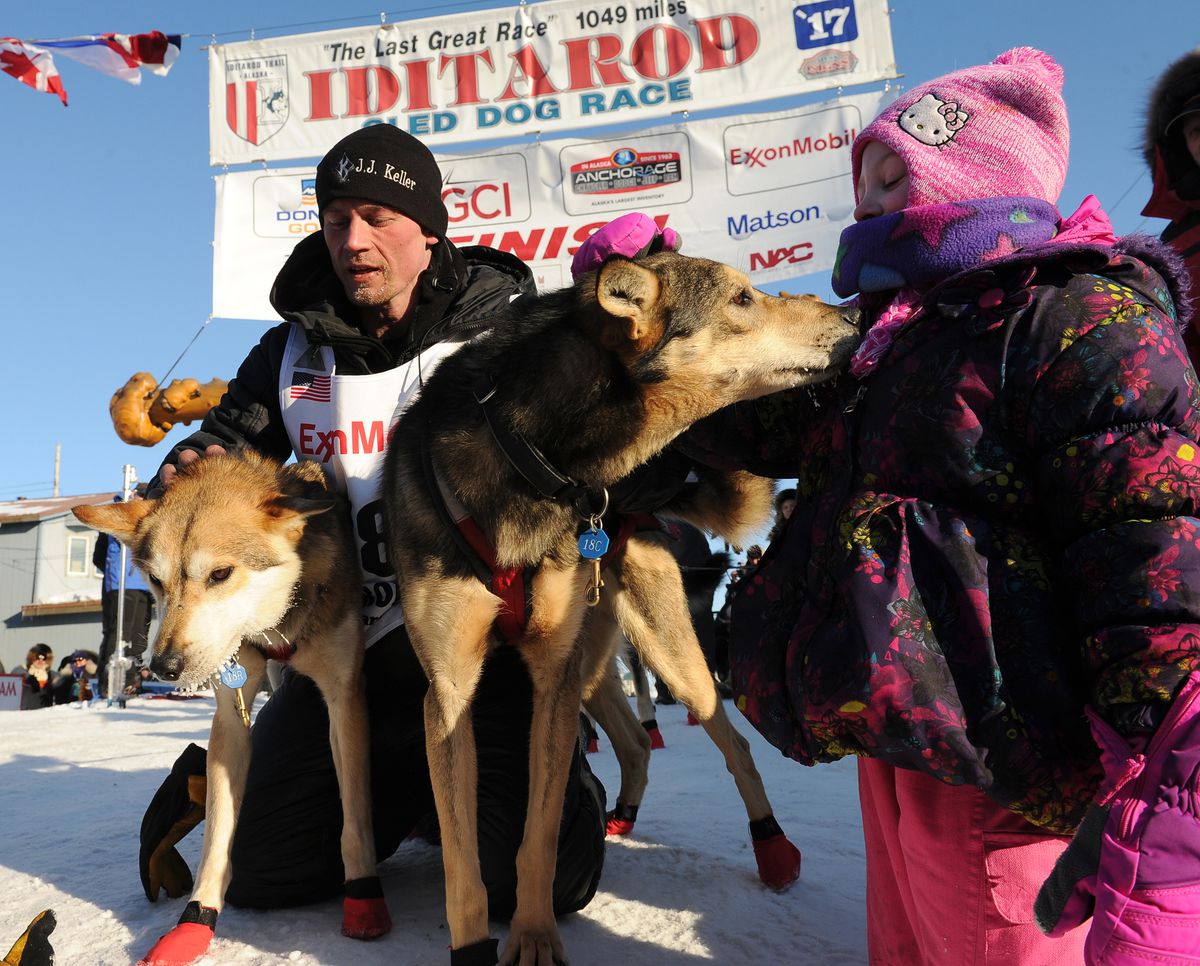 Iditarod musher Dallas Seavey poses with his lead dogs Reef and Tide while his daughter reaches out to pet one at the finish line of the 2017 Iditarod Trail Sled Dog Race on Tuesday, March 14, 2017. (Bob Hallinen / Alaska Dispatch News)

Iditarod musher Dallas Seavey poses with his lead dogs Reef and Tide while his daughter reaches out to pet one at the finish line of the 2017 Iditarod Trail Sled Dog Race on Tuesday, March 14, 2017. (Bob Hallinen / Alaska Dispatch News)

Just when the sports world thought it had heard it all in doping — someone spiked my toothpaste, a masseur rubbed me with tainted ointment, those unexplained stem cells in my blood came, of course, from my unborn twin in utero — along comes the Iditarod.

A doping scandal has hit the world's most famous dog-sled race, the 1,000-mile trek through Alaska that ends in Nome each March. Four dogs on a team run by Dallas Seavey, a four-time champion and the most dominant musher in the sport, tested positive last spring for high levels of tramadol, an opioid pain reliever.

Seavey finished second in this year's Iditarod behind his father, Mitch, who ended his son's three-year winning streak. The younger Seavey was identified as the doping dogs' musher on Monday, lifting the sport into headlines and punch lines.

There is no proof that Seavey was the one who gave his dogs the drug, and he sternly claimed his innocence in a nearly 18-minute soliloquy posted to YouTube on Monday. He suggested a likely, if familiar, explanation: sabotage.

"Sabotage is a likely case," Seavey said. "If it was not another musher — and believe me, I hope it was not — there are many other people that could do the same thing."

It was a familiar response in the sports world. When confronted with allegations of doping, deny. When pressed, raise a possible explanation, no matter how outlandish it sounds. The sprinter Justin Gatlin and baseball slugger Barry Bonds tried to pin accusations on a rubbed-in ointment. The middle-distance runner Dieter Baumann blamed spiked toothpaste. The cyclist Tyler Hamilton forwarded the vanishing-twin theory, suggesting that the blood in his body that wasn't his own could be explained by a twin he had that died in utero.

Like most excuses, they were mocked at the time and later deemed invalid.

One thing that makes this case different — besides the athletes in question being dogs, not humans — is that many of Seavey's competitors believe his excuse. Several top mushers defended him and echoed his theory that something unknown and untoward was at play in the backwoods of Alaska.

"I don't believe for a second he did it — not for one second," said Jessie Royer, who finished fifth at the Iditarod. "He's not that way. He's an honest, hardworking person, and he sure as hell isn't dumb enough to give dogs tramadol hours before a drug test."

But if Seavey did not give his dogs the banned substance, who did? Was it a jealous competitor? An anti-dogsledding activist looking to undermine the sport's top race and top racer?

Those questions percolated across the mushing community on Tuesday, leaving many perplexed. Aliy Zirkle, who finished eighth this year and has raced against Seavey for a decade, called him "an honest and upstanding Iditarod competitor," not the type to break rules.

"I do not think that he gave those drugs to his dogs," Zirkle said in an email. "Obviously his dogs were given drugs — but by whom or why? I don't know."

The thought that another musher would taint Seavey's dogs sounded unlikely to his competitors. The sport is a tight and insular one, in constant need of sponsors and promotion, and setting off a doping scandal would hurt the sport as much as it would damage Seavey. And tramadol would be a strange drug choice; it is not commonly used in the world of dogsledding. Royer said she had never heard of it.

That reasoning led some to speculate that outsiders who protest the Iditarod and similar events might be involved.

"There are people in the world who truly believe that dog mushing is cruel and should be banned," Zirkle said. "Of course, this is far from the truth, but lies can be told about any subject and some people believe them. I guess the question is: Are there really people radical enough to actually give drugs to his dogs in order to undermine an honest, hardworking good man? Crazy speculation, I know! But that seems to be all we are left with now."

Unless, of course, Seavey did it. The Iditarod Trail Committee, which stages the event, does not seem convinced. It did not discipline Seavey, nor ask him to return the $59,637 he won in prize money, because it could not prove intent, as was required by race rules. After the positive tests emerged, the first ones since the race began drug testing the dogs in 1994, the group examined rules in other sports and realized it was virtually alone in not placing the burden of proof on the athlete — in this case, the musher, not the dogs. It changed the rule earlier this month and, in announcing those changes, brought Seavey's drug-test results to light.

"If you look at the intent, why would a musher want to do something like that so close to the finish line?" said an Iditarod spokesman, Chas St. George. "That musher knows that he or she is going to be subject to a test. It's speculative, it's not evidentiary, but you have to ask that question."

The closest parallel to the Iditarod case may be an episode at the 1968 Kentucky Derby, won by Dancer's Image, who tested positive for the painkiller phenylbutazone. The horse's owner, Peter D. Fuller, futilely suggested that someone had sneaked into the horse's stall and administered the drug. Dancer's Image remains the only winning horse to be disqualified from the Derby.

These days, top horse races have guidelines about security and surveillance of the horses, sometimes with 24-hour cameras in the stalls.

The Iditarod is different. When it comes to drug testing and consistent monitoring of the dogs, the event is rife with logistical challenges that may be unique in sports — a 1,000-mile race through the wilderness that lasted more than eight days for this year's top teams, each of which started with 16 dogs.

Typically, officials conduct urine tests at the ceremonial start in Anchorage, at the finish line in Nome, and randomly at the roughly three dozen checkpoints along the way.

At the start and finish, and in larger towns along the way, fans often get close to the dogs.

"We invite spectators to pet our dogs, we share intimate stories about mushing and we hope that people celebrate dog mushing and our huskies like we do," Zirkle said. "It is for this reason it would not be difficult to have walked up to any one of Dallas' dogs after the race or even during the event and given them a drugged biscuit or treat. His dogs, like mine, are incredibly friendly and are used to kind gestures and treats."

Mushers are usually nearby, as are veterinarians and volunteer race officials, but not always. At checkpoints, mushers usually feed the dogs, massage them, try to get them to rest, and restock the sled with supplies. Sometimes they will leave the dogs alone while they go into a tent to nap or eat.

"You have to remember how remote this race is," Royer said. "If someone really wanted to do something, I guess they could. Usually that's not a concern, at least not in the past."

A major area of concern, at least now, are the food drops that teams have shipped to places along the course. The Iditarod drops up to 90 tons of the shipments, usually a few weeks before the race begins. Seavey said they could easily be sabotaged. St. George said the Iditarod was looking into ways to ensure the food drops would not be tampered with, perhaps through more security and surveillance.

Creating foolproof security around dozens of checkpoints, hundreds of dogs and a thousand miles of a remote course is a daunting task. Royer half-joked that someone could probably leave laced meatballs on the course and dogs might scoop them up.

One other thing makes the Iditarod case different from others in sports: It is likely to go unsolved. Without a full investigation — where to start, and who will do it? — there probably is no way to know for sure what happened to Seavey's dogs.

"That's the tough part, actually," St. George said. "Having closure on something like this would be the most preferred outcome. But we don't."