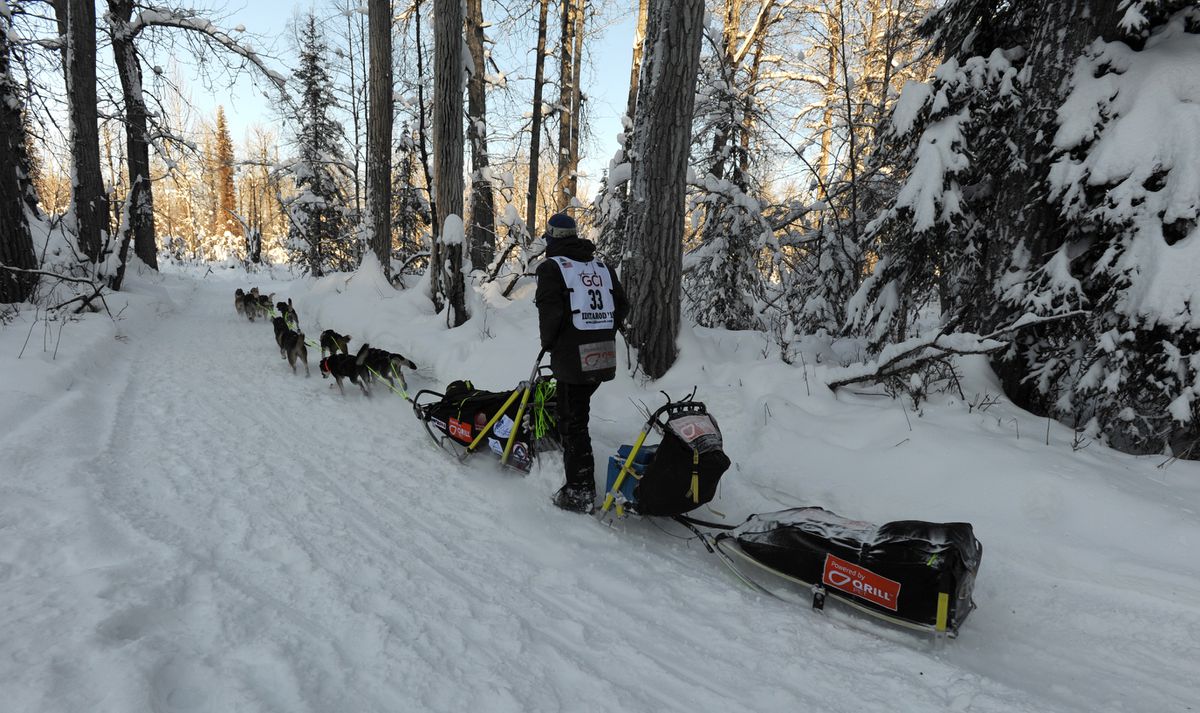 Joar Leifseth Ulsom drives his team after the restart of the Iditarod Trail Sled Dog Race in Willow on Sunday, March 4, 2018. He won the 2018 race. (Bill Roth / ADN)

Joar Leifseth Ulsom drives his team after the restart of the Iditarod Trail Sled Dog Race in Willow on Sunday, March 4, 2018. He won the 2018 race. (Bill Roth / ADN)

With days to go until the start of the Iditarod Trail Sled Dog Race, there’s “lots of snow” on most stretches of the 1,000-mile trail to Nome, according to Iditarod Race Director Mark Nordman.

What race organizers know for sure: There’s ample snow for the 11-mile ceremonial start through Anchorage on March 2, when the 52 Iditarod mushers and hundreds of sled dogs will travel the city’s streets and trails for the parade-like event. Also, this year’s race to Nome will officially start the next day out of Willow, Nordman said.

[When does the 2019 Iditarod start? (And 10 other questions about Alaska’s most famous sled dog race]

That’s keeping with the usual plan, the same one followed in 2018. In the three prior years, the Iditarod had a few unusual race starts: In 2015 and 2017, race organizers moved the official start from Willow to Fairbanks due to poor trail conditions. In 2016, they shortened the Anchorage ceremonial start to just 3 miles because of a lack of snow in the city.

This year, the Iditarod is following its so-called “southern route,” just as it did last year.

Nordman said he has generally gotten reports of deep snow on much of the trail except for a few areas including around Egypt Mountain, between the checkpoints of Rohn and Nikolai, and around the checkpoint at Iditarod, a ghost town about 430 miles into the race.

“I think with the amount of snow we have, it’s going to be, once again, a challenging race," Nordman said. “But our top teams, it seems like they’re so well prepared that it doesn’t really seem to affect them.”

Deep, soft snow can slow down a race as teams slog through the powder, like last year when Joar Leifseth Ulsom won the 2018 Iditarod in 9 days and 12 hours. A hard-packed trail can speed it up, like in 2017 when Mitch Seavey set a new speed record, notching his third victory in 8 days, 3 hours and 40 minutes.

Both Leifseth Ulsom and Seavey are signed up for the 2019 Iditarod.

Nordman said trail breakers have recently worked on portions of the trail out of Willow, including the steep and twisty Dalzell Gorge between the checkpoints of Rainy Pass and Rohn. They used trees, brush and snow to create bridges over open water.

Sea ice — or the lack of it — could lead to trail changes in the final 200 miles of the race.

As of Saturday, Nordman said, he expected the trail to swing closer to the coast between the communities of Shaktoolik and Koyuk due to unsafe sea ice. That could change if conditions improve, he said.

The trail will also travel overland between Elim and Golovin because of a lack of sea ice, he said.

Meanwhile, Iditarod crews are busy flying supplies to checkpoints along the trail. That includes everything from straw for the dogs to food for the volunteers to the bags mushers packed ahead of time with supplies for themselves and their teams.

The Iditarod ceremonial start begins at 10 a.m. in Anchorage on Saturday. Mushers and their sled dogs will leave the starting line at Fourth Avenue and D Street at two-minute intervals. Then, they’ll drive about 70 miles to Willow for the official race start at 2 p.m. on Sunday, March 3.