Meet the people whose job it is make sure the Iditarod is fair: the ‘pee catchers’ 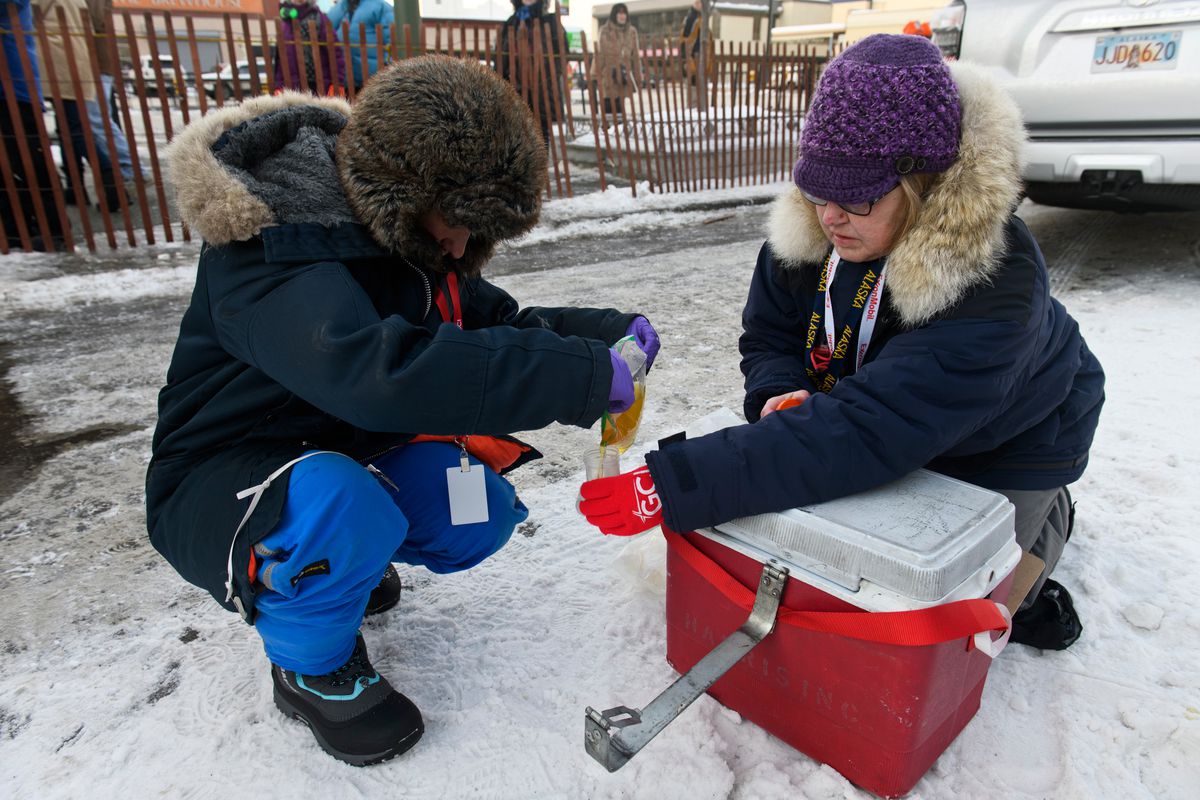 Amid the hundreds of barking and yipping sled dogs that lined the streets of downtown Anchorage Saturday morning, a small army of volunteer veterinarians was busy at work, bouncing from mushing trailer to mushing trailer, verifying the dogs’ microchips and tending to any dog fights and last-minute medical needs.

“Believe it or not, for a lot of veterinarians this is a vacation, because it’s just so different from their normal routine," said Chief Veterinarian Stu Nelson.

Some of them had a more specific job: collecting dog urine.

“They can go up to any musher, at any point, any dog and they say, ‘We need pee right now,'” Riley said.

That’s true at the race start, but it’s also true on the trail, veterinarians said. Additional urine samples will be taken randomly along the route, and the dogs have also had blood samples drawn to ensure that none have been given anything that could give it a competitive advantage during the race.

The list of medications that could potentially give a dog that competitive edge is a lengthy one. The Iditarod’s canine drug testing manual includes everything from anabolic steroids and tranquilizers to anti-inflammatory drugs and painkillers — anything that can improve speed or endurance or relieve discomfort on the trail, Nelson said.

“If they’re sick enough to need medication, they’re going to stay with a vet anyway,” said veterinary technician Tammy Crabb, who flew in from Connecticut to be part of this year’s race.

A musher whose dog falls ill or becomes injured on the trail is supposed to drop off at the next checkpoint rather than treat the dog themselves with medication, Crabb said.

There are few exceptions to the rule. Mushers can use topical corticosteriods on a dog’s paws, for example, or administer a certain drug that suppresses the reproductive cycle of female dog in heat. For the most part, though, dogs have to be drug-free, and the consequences for a failed test can be severe — all the way up to a lifetime ban from the race.

If there is a violation on the trail, though, the musher isn’t pulled out right away.

“It takes time to get all your ducks in a row in confirming that it’s a violation," Nelson said.

That has never happened, however. Only one musher, Dallas Seavey, has ever come under scrutiny for dog drugging, after four of his dogs tested positively for tramadol, a prohibited opioid painkiller, at the end of the 2017 Iditarod. Seavey has repeatedly denied that he gave his dogs the drug, speculating that he may have been sabotaged.

The Iditarod has since absolved Seavey of having involvement in the drugging, and Nelson said the Iditarod has had a “pretty darn clean slate” since then.

Part of that is because drug testing itself is a deterrent, he said — there’s no point in a musher trying to drug a dog if they’ll likely be caught.

“It’s like a state trooper," Nelson said. "If you have one at every intersection, then for sure you’d catch anyone trying to run a red light.”

For the “state troopers” out on the trail, what that typically entails is a lot of plastic baggies: If the dog is a male, the vets can attach the bag underneath its genitals to catch the urine, but if it’s a female, they have to wait until the dog to squats to urinate before they can slide the baggie underneath.

The timing of the drug testing is a science. Usually, a sample has to be taken as soon as the dogs come out of their musher’s trailer for the first time, when they haven’t urinated in a while. Once the sample is taken, it’s there is a closely-guarded process for shipping it off to a lab for testing.

The veterinary team that does the work is made up largely from volunteers, many of whom flew in from the Lower 48 or abroad. Nelson said one of his team members is from Ireland, one is from Germany and two are from Australia.

“The experience is unreal,” said Riley, who is from Massachusetts and working the Iditarod for the first time. ”I don’t think we expected what we would actually be doing, being able to see the animals and the care and provide them with attention."