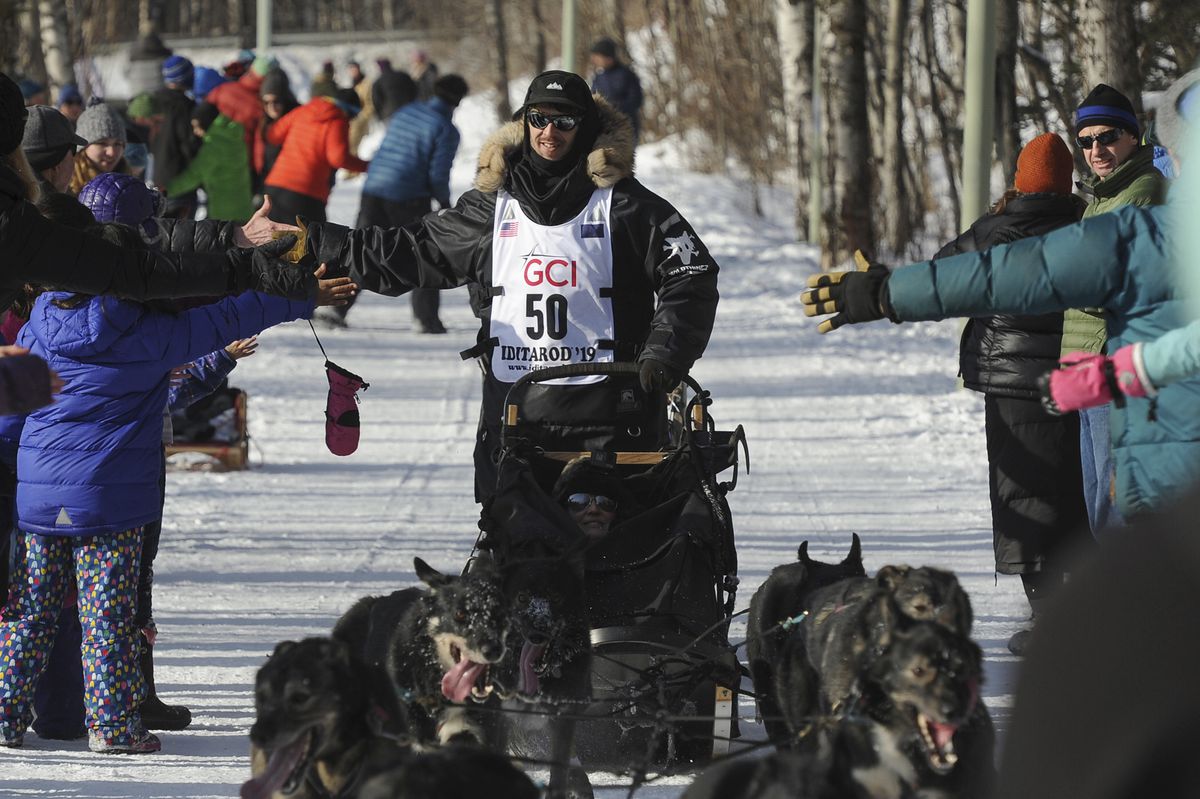 An Iditarod sled dog that crossed the finish line in Nome on Thursday night has died, and the musher has been withdrawn from the event, according to race officials.

Beattie arrived in Nome with nine dogs, including Oshi, at 10:01 p.m. Thursday in 21st place. Eight of the dogs pulled the team into Nome with Oshi riding in Beattie’s sled bag, confirmed race director and race marshal Mark Nordman on Monday. During a post-race interview, Beattie said the dog was tired, KTVA reported.

Oshi was taken out of the sled bag in the finish chute Thursday night and briefly reconnected to the team until a leash was found, Nordman said. Oshi was walked separately on the leash, he said.

“Sadly, Oshi passed away the following day,” the statement said.

Oshi died at an Anchorage animal hospital at 6:37 p.m. Saturday. The dog died from aspiration pneumonia, according to a preliminary diagnosis.

It was the first dog death in this year’s Iditarod, which started March 3 in Willow with 52 teams.

Under a new race rule, Beattie was withdrawn from the 2019 race. That means he will not receive any prize money, including the winnings for being the first rookie to make it to Nome.

[From most inspirational musher to most outstanding lead dog, here are the 2019 Iditarod award winners]

Beattie could not be reached for comment on Sunday.

A post on the Facebook page for Beattie’s and his wife’s dog team, Wildthingz Dog Mushing, said they were mourning the loss of Oshi.

A few hours from the Nome finish line, Beattie “noticed something was off about Oshi and immediately carried her in the sled to the finish,” the post said.

“After the finish, the vets noticed symptoms that resulted in aspiration pneumonia, an illness that can happen very suddenly with little to no symptoms before it can have devastating or fatal effects,” it said.

"She battled it for 3 days, was flown to the Anchorage pet ER where she received aggressive treatment, but unfortunately she lost her battle and passed on. When we participate in these events, we always take into heavy consideration the risks, but never think that a tragedy like this could happen to us personally.”

It's with incredible sadness and heavy hearts we have to share we lost our sweet Oshi this evening. A few hours from...

Beattie, 45, was born and raised in Michigan and moved to Alaska in 2000, according to his Iditarod race bio. He lives in Two Rivers. He’s a two-time finisher of the 1,000-mile Yukon Quest International Sled Dog Race, and was the rookie of the year in that race in 2006.

He is cooperating with race officials, the Iditarod statement said.

The Iditarod’s governing board adopted a new rule in June 2018 that said mushers who have a dog die during the Iditarod will be out of the race that year, unless the death was due to an “unpreventable hazard” such as a moose encounter. If a musher is withdrawn, it “does not imply any deliberate misconduct,” the rule says.

Also according to Iditarod rules, dogs are under the jurisdiction of the race marshal from the time they enter the Iditarod race staging area at the start “until 72 hours after they have been released by (Iditarod Trail Committee) veterinarians or 48 hours after the final musher finishes.”

A necropsy will be conducted to determine Oshi’s official cause of death, race officials said.

This story was updated Monday to include information about Oshi arriving in Nome in musher Richie Beattie’s sled bag and information from the team’s Facebook page.