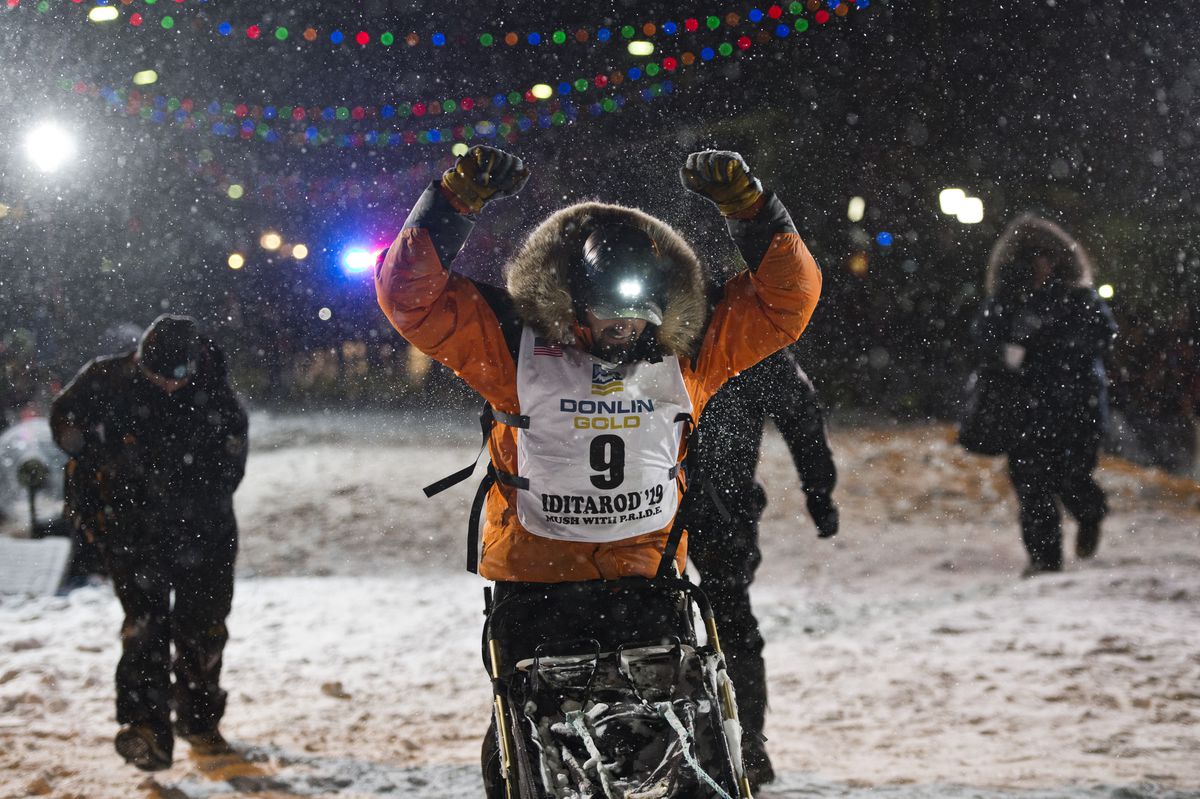 NOME — Bethel musher Pete Kaiser pumped his fists in the air early Wednesday as his eight-dog team trotted across the finish line to win the 2019 Iditarod Trail Sled Dog Race.

Even in the blowing snow hours before sunrise, fans packed the area around the finish chute. They whistled, cheered and chanted Kaiser’s name as he pulled in at 3:39 a.m. — just 12 minutes ahead of defending champion Joar Leifseth Ulsom.

Alaska Native dancers and drummers performed. Dozens of people had flown in from Bethel to watch Kaiser notch his first Iditarod victory. It’s something Kaiser has thought about since he was a kid, he said.

“It’s amazing,” said the 31-year-old musher, “but honestly it’s not going to sink in here for a while.”

Kaiser is the first musher of Yup’ik descent to win the 1,000-mile race to Nome, and the first Alaska Native champion since John Baker in 2011.

“I didn’t get a wink of sleep last night,” said Bethel mayor Fred Watson, who followed the race online. “This is groundbreaking. This is amazing.”

At the finish line, Kaiser shared a long, emotional hug with his wife, Bethany, and their two children, 6-year-old Ari and 1-year-old Aylee. He walked among his dogs, including leaders 4-year-old Lucy and 7-year-old Morrow. Morrow licked his face. The crowds’ cheers continued.

Kaiser gets a new truck and a check for at least $51,000 for his win. And Southwest Alaska gets a young champion to cheer, a man who has stayed close to his roots rather than relocating to one of Alaska’s mushing hubs on the road system.

“Our support system is incredible and the whole community and region and everybody out there,” Kaiser said.

“I mean, you saw it tonight, half the town jumped on jets to come up here and watch me finish and it’s incredible,” he said. “I mean, I’m so humbled by that and appreciative and it’s so motivating. It’s very special.”

Kaiser and his sled dogs were still in the finish chute early Wednesday when 32-year-old Leifseth Ulsom and his eight-dog team arrived. Leifseth Ulsom, a Norwegian who lives in Willow, placed second at 3:51 a.m. It was the fifth-closest finish between first and second place in the 47-year history of the race.

At 9:34 a.m. Wednesday, 42-year-old musher Jessie Royer and her 11-dog team finished the race in third for a career-best finish. Royer splits her time between Fairbanks and Montana.

A slow and warm race

Kaiser is a quiet, calm and focused musher, and a consistent top performer.

This was his 10th Iditarod. He placed at least 14th every year except his rookie run. Before this year’s win, his best finish was fifth and he did that three times, including in 2018. Kaiser is also a four-time champion of the Kuskokwim 300, a 300-mile race that starts and ends in his hometown.

During this year’s Iditarod, Kaiser said, he focused on putting his team in a good position so they could take advantage of any competitor’s missteps.

More than three-quarters of the way into the race, they saw their opportunity and they seized it.

A late-race shakeup knocked Girdwood musher Nicolas Petit out of the lead and eventually out of the race. Kaiser surged ahead as the new leader, followed closely by Leifseth Ulsom.

Kaiser described the run to the finish line as nerve-wracking knowing that Leifseth Ulsom wasn’t too far behind. They raced through the darkness into Nome and Kaiser kept looking over his shoulder for the man he described as a really good friend.

“It’s a pleasure to race against him and travel with him, you know. He’s a very humble champion,” Kaiser said. “It’s a weird dynamic when you’re friends with somebody, but you’re also fierce competitors.”

Kaiser said he didn’t feel comfortable with his lead until he landed on Front Street early Wednesday, with the finish line just down the road.

His winning time was 9 days, 12 hours, 39 minutes and 6 seconds in a race notable for its warm temperatures and slow conditions. It was the slowest winning time since 2009.

At the finish line, Kaiser walked over to the crowd and was enveloped by hugs.

His win is huge for Bethel, the region and rural Alaska, said Madelene Reichard, race manager of the Kuskokwim 300 in Bethel.

“This win is going to be owned by everybody,” said Kaiser’s mom, Janet, the day before he arrived in Nome. “Everybody is on board.”

Kaiser is the fifth Alaska Native to win the Iditarod. Athabaskan mushers won three of the first four races — Carl Huntington in 1974, Emmitt Peters in 1975 and Jerry Riley in 1976. It was 35 years before another Native won — 2011 champion John Baker, an Inupiaq from Kotzebue.

Kaiser’s roots run deep in Bethel. His Yup’ik great-grandmother was raised in an orphanage in Bethel, Janet said. His Scottish great-grandfather came to the country as a gold miner and eventually landed in the Southwest Alaska community

Kaiser was born and raised in Bethel, home to roughly 6,000 people. He started mushing for fun as a kid with his family’s pet dog named Giant.

“As soon as he’s getting big enough to need two dogs, we got another dog and then we got one or two more and then it just kept going,” said Kaiser’s dad, Ron.

Kaiser and his sister competed in local Sunday races. As a high school senior in 2005, Kaiser won the 65-mile Akiak Dash. Kaiser tried college, but decided what he really wanted to do was train and race sled dogs full-time. He started building his own team in Bethel. He currently has 42 dogs.

[An “encyclopedia” of racing knowledge: Meet the new Iditarod champ and his family]

“When Pete got started, he was basically starting from scratch as a youngster,” said Myron Angstman, a Kuskokwim 300 race founder. “Pete didn’t start from a position of strength or abundance when he got his program going.”

Angstman said he thinks Kaiser winning the Iditarod will increase the popularity of dog mushing in the Bethel area. Local mushers will identify with Kaiser’s story, he said, “because most of our racers are not sponsored, they’re not wealthy and they don’t have a family kennel already established.”

“They just kind of put together dogs the best they can,” Angstman said. “This kind of success by Pete will inspire more to do that. For us, that’s a good thing.”

The race committee wants to encourage more family-kennel operations in Bethel that are self-sustainable, Angstman said. Dog mushing gets people outside and exercising, and it usually involves family participation, he said.

Angstman arranged a flight at the last minute to see Kaiser pull into Nome, and so did Reichard. Others in Bethel also scrambled to book flights to make it to the finish line in time.

Asked what his win meant for mushing in the region, Kaiser said: “Obviously it shows that somebody from out there can have a dream and put it all together and work hard and things can happen like this, so it’s not impossible.”

Reichard agreed. She said it’s great that children will see an Iditarod champion who they can identify with, who looks like them.

“Plus, it’s such a small town,” she said about Bethel, “so running into the Iditarod champ at the post office will be pretty cool.”