As Quest mushers reach Dawson, one team arrives at the halfway point without its driver 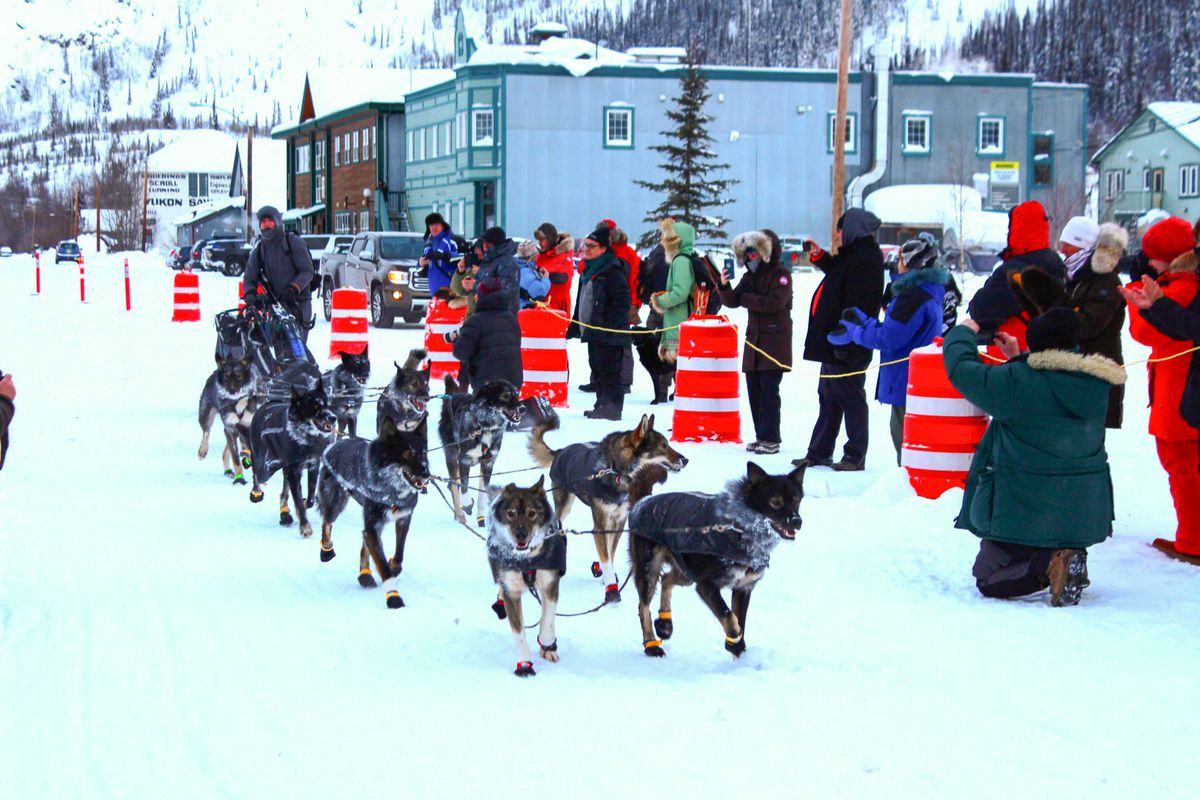 Richie Beattie's team arrives in Dawson City, but with someone other than Beattie on the sled runners. (Lex Treinen for KUAC)

Richie Beattie's team arrives in Dawson City, but with someone other than Beattie on the sled runners. (Lex Treinen for KUAC)

DAWSON CITY — Just before her husband’s team arrived at the halfway point of the Yukon Quest on Friday, Emily Rosenblatt said something she later regretted.

“It couldn’t get worse than this at this point,” she said as she waited inside the race chute on the waterfront of Dawson City.

But it did get worse. A few minutes later her husband’s sled arrived without her husband. A man jumped off the sled, but it wasn’t Richie Beattie.

“This was at Moosehide with no person,” the man said, referring to a Han village about 3 miles downstream from Dawson. He grabbed a pair of skis he had stuffed into the sled and left the chute.

Rosenblatt’s face changed from anticipation to panic when she realized that in fact things could get worse for her, despite the troubles she endured to get to Dawson City.

Her car broke down an hour after she left her home in Two Rivers, necessitating a quick U-Haul rental and a frantic Facebook bid for an extra dog truck. She got one from musher Lance Mackey, but sometime after midnight outside Tok, the ball hitch on the trailer sheared off, sending sparks flying down the road.

Four hours of sleep was just enough to prepare her for the final 20-hour slog to Dawson City, where she stood in the chute on the verge of tears after Beattie’s sled arrived without Beattie.

“Someone get a snowmachine!” she called as race marshal Peter Reuter jumped on a machine barehanded and without a hat in the zero-degree weather and tore off downriver.

Rosenblatt comforted the dogs one by one while others comforted Rosenblatt. The animals seemed to sense something was wrong and started barking loudly.

“He probably caught a ride with Rob,” someone said, referring to musher Rob Cooke, who according to the race tracker was less than a mile from Dawson City.

Finally, shouts came from the far end of the drag as a sled appeared and eyes turned in its direction. Was there a second musher on the sled? No.

But then eyes turned back to Beattie’s sled.

Most had missed Reuter drive up to the finish area with Beattie.

Rosenblatt and Beattie embraced for a long moment before completing the paperwork to clear customs and checking that Beattie had the required supplies.

In the chute, Cooke described what happened 3 miles from Dawson City.

“There was a guy walking down the trail and he was freaking the dogs out, and I was getting ready to really start shouting at him because he wouldn’t move, and then he crossed the trail and he turned around and I recognized it was (Beattie), and so I said, ‘What’s happening?' (and) he said his dog team had just taken off,” Cooke said. “I just got him to jump on, we just shared the runners.”

Right before the final turn into Dawson, Reuter drove up and picked up Beattie.

Beattie later said he was operating on eight hours of sleep since the start of the race Feb. 1 in Fairbanks, and he had been up past 2 a.m. three straight nights before the race doing last-minute preparations.

“Quite simply I fell asleep, woke up and I was hopping back up to my feet and watching my dog team roll away from me," he said. “But I could see Dawson right down the way so I wasn’t too concerned for the dogs’ well-being because they’re just trotting along at a slow 7-8 miles an hour even without me, or especially without me.

“I just took off after 'em but I was so physically spent I didn’t have the energy to run, and then luckily Rob came up not too long behind me.”

In the 2014 race, Brent Sass suffered a serious concussion when he fell asleep in his sled and fell off. Sass, the reigning champion, said he still occasionally dozes off while traveling an easy section of trail.

Beattie escaped his ordeal unscathed and is set to go once his mandatory 36-hour layover in Dawson City ends. Race rules allow for assistance in emergency situations when no competitive advantage is gained.

In the race chute Beattie worried about his dogs, but a quick check by race veterinarians revealed no major issues with them either.

“They’re great, they were barking when they came in just,” Rosenblatt told him. And with their arms wrapped around each other, they stepped onto the sled runners and headed to the dog yard across the river.