With heavy snow, moose are top of mind for Iditarod mushers 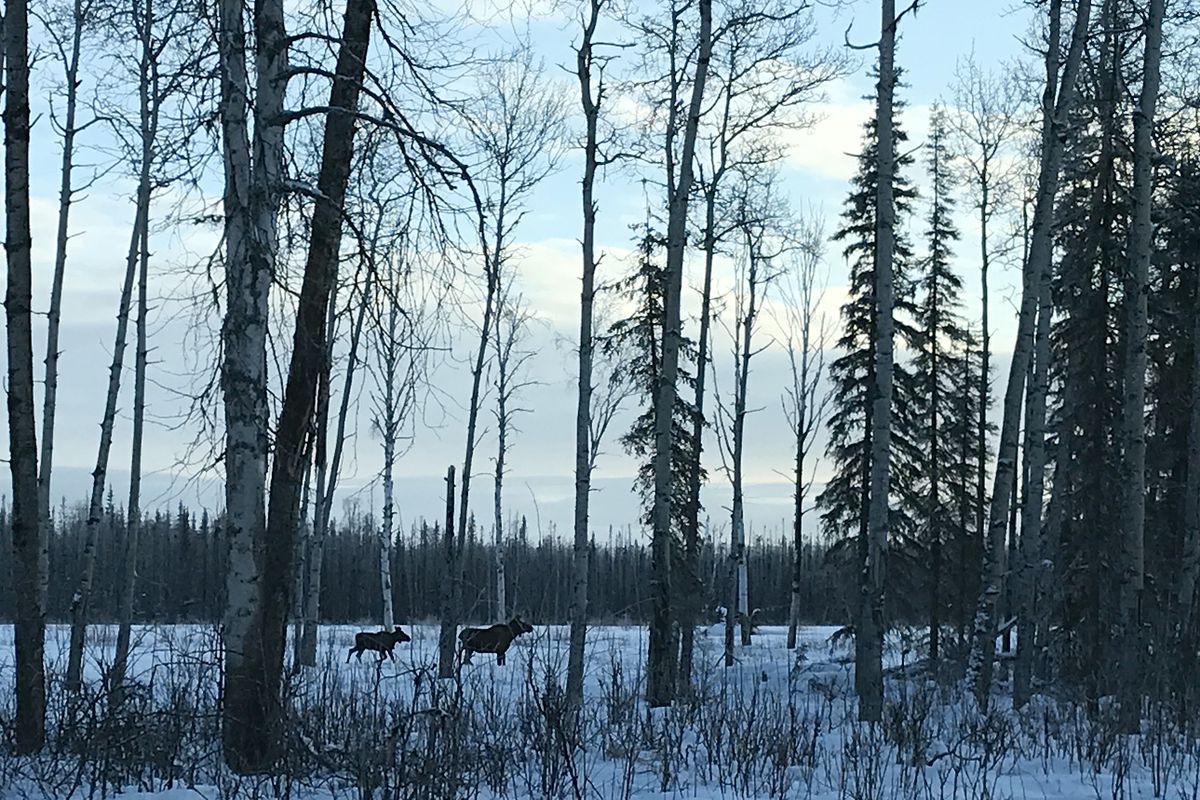 A cow and calf moose travel through the snow in an open field in Willow in February 2020. (Bill Roth / ADN)

A cow and calf moose travel through the snow in an open field in Willow in February 2020. (Bill Roth / ADN)

A buzz is moving through Alaska’s dog-mushing community as the Iditarod Trail Sled Dog Race approaches: Moose are stacked up in the Susitna Valley, and with deep snow, the animals will opt to travel the race trail to conserve energy.

That can be treacherous for mushers and their dogs on their way to Nome, as moose have been known to go after dog teams aggressively, stomping them and anything else that gets in the way.

Two-time finisher Jeremy Keller of Knik said he’s been training along the Yentna River for the past month, and he has seen many moose.

“Oh my lord are there a lot of starving moose. They can’t get off the river. They’re on the banks, and it’s just too steep," he said. “I’ve seen it. It’s definitely different. I think it’s highly likely there are going to be some fireworks with moose, for sure.”

Deep snow and the possibility of moose on the trail await the field of 57 mushers in this year’s race. The ceremonial start begins at 10 a.m. Saturday in Anchorage, with mushers leaving Fourth Avenue in two-minute intervals for their 11-mile ride across town to Campbell Airstrip. Racing begins for real Sunday at 2 p.m. at Willow Lake.

Moose are always a potential hazard for dog mushers, but this year, reports of them have been plentiful. During the Iron Dog snowmachine race in February, volunteers breaking trail outside of McGrath encountered about 20 moose. One of the animals kicked in the side panel and broke the kill switch of one of the machines.

Sometimes, mushers are able to put down a moose before it does too much damage, whether in training or a race.

Aaron Burmeister of Nome is running his 19th Iditarod and will take a .44 Magnum with him. Several years ago during training run, he had to shoot a moose that was stomping his dog team while wrapped up in the gangline, he said. Other times he’s had to snowshoe a trail around a moose in order to proceed safely.

In the 1993 Yukon Quest, Jeff Mann of Mentasta killed a moose with his ax.

In 1985, Susan Butcher of Manley scratched after several dogs in her team were stomped by a moose. Trapper Creek musher Duane “Dewey” Halverson came up behind Butcher and shot the moose. Normally Butcher carried a pistol, she told the Daily News at the time, but that year she left it at home.

Few this year are planning to be similarly unprepared. Iditarod race director and race marshal Mark Nordman said he took a poll at Thursday morning’s musher meeting to see who was bringing a gun, and the majority raised their hand, he said.

“If I have to use it, we’re already going to be in some serious you-know-what," he said.

Aliy Zirkle of Two Rivers said she packs a .38 pistol, but prefers to fire her flare gun.

“I would hope that would scare anything off before I have to use anything else,” she said.

Michelle Phillips of Tagish, Yukon Territory, Canada, is one of the few racers who won’t have a firearm.

“I thought about it," she said, “but I’ve never shot a handgun.”

If a musher does kill a moose — or any other “edible game animal” — race rules require they gut it before moving on. Teams that come upon another musher gutting an animal must assist, if possible. No other team is allowed to pass until the musher who killed the animal has resumed the race.

Nordman said there’s a lot of trail where moose will be scarce. They’re mostly concentrated from Skwentna up to Ruby, he said. Others reported them as far as McGrath.

[Iditarod has a new concern in 2020: Coronavirus]

Nordman said trailbreakers in that area are making more of a zig-zagged trail with pullouts. That should give mushers a little more room to maneuver when a moose opts for the trail.

“They’re a creature of habit, too, and they don’t want to struggle through the deep snow we’ve had,” Nordman said.

Keller said moose are especially aggressive with sled dogs. Moose mistake them for their top predator.

“Moose are bird-brained, so they see sled dog, they think wolf," he said.

Because of the deep snow, both Martin Buser, the most veteran of this year’s field with 36 Iditarods behind him, and his protege, Tim Pappas, will pack guns, Buser said. Normally, he leaves them at home.

“Tim got stomped by a moose coming down the hill today," Buser said a couple weeks ago at his Big Lake kennel. “He’s a moose magnet. He ripped off half his windshield on his snowmobile. After an encounter like that, and we’re taking the gun, simply because of the snow depth.”

Reigning champion Pete Kaiser said he hasn’t encountered many moose while training around Bethel, but still said he’s planning to carry a gun this year.

He joked that he’ll stay behind Fairbanks musher Jessie Royer, so she can pick off any would-be attacking moose. Royer competes in events where she shoots balloons with pistols while sprinting on horseback.

Royer said that in 17 years she has only packed a gun once on the Iditarod. She didn’t spot a single moose that year. This year, she’ll be one of the few unarmed mushers: She left her guns in Fairbanks.

As usual, Larry Daugherty of Eagle River will bring a .375. He said moose will undoubtedly be on the trail. He saw about 10 last weekend when his son competed in the Junior Iditarod.

From what Keller has seen, he thinks the moose this year are especially dangerous.

“They’re ornery, they’re hungry, and somebody’s going to have some fun," he said. “They don’t like us in the first place, but they definitely don’t like us now. And if they have enough strength left, they will definitely kick the s--- out of us. But it will be fun. Game on.”