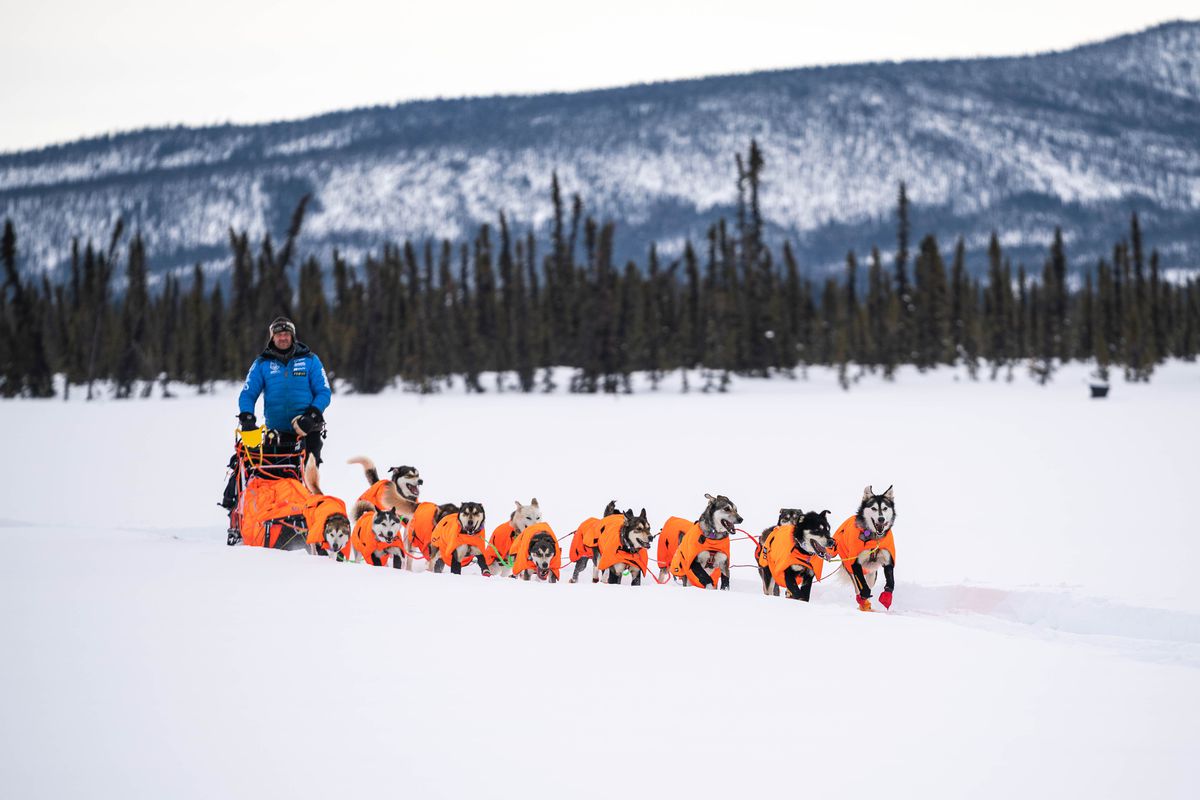 CRIPPLE — As the world grapples with whatever new reality the coronavirus is bringing, a few dozen people racing through Alaska’s Interior have remained mostly insulated from the chaos.

As they mushed along, watching for moose and changing out dog booties, professional sports leagues suspended seasons, schools were closed and the stock market took a historic dive.

Yet, on the Iditarod Trail, you’d have no idea.

In Takotna on Wednesday night, people weren’t huddled around a TV to watch the news. They were watching a screen showing the locations of 56 mushers, their speeds and how much rest they’ve had at long tables in the community hall. Little else mattered, in part because little other information was available.

The village of 51 is accessible via an airstrip and is buried in deep snow during the winter. The race cuts through rural Alaska, removed from the road system and most infrastructure, including cellphone service.

Through the first few days of the race, chatter about the coronavirus was nearly nonexistent. A more common topic was the moon — it’s loomed large and, at times, orange.

But that started to change Thursday when the Iditarod announced it canceled its awards banquet in Nome.

“People are losing their minds,” Phillips said after hearing about the stock market crash and canceled professional sports seasons.

They were in Cripple, a long-deserted mining location and the most remote race checkpoint. From the air, Cripple, a checkpoint propped up on a swamp, is a blip in an expanse of old mines and tundra.

They’re going to cancel the Iditarod, the mushers joked.

“As soon as I get to Ruby and no one else is there, then we can stop,” Drobny joked.

One musher has a direct tie to the pandemic.

Rookie Fabio Berlusconi has been in Willow for the past six months training with veteran musher Linwood Fiedler, but he’s from Lomazzo, Italy. Lomazzo is a small town south of the Swiss border where his mother, 64, and his father, 69, live, and it’s located in the region of Italy hardest hit by the coronavirus.

Berlusconi, talking in Takotna, said he called his parents the night before the race, after travel restrictions were imposed in Italy and border crossings into Switzerland, where his brother lives, were heavily limited. The morning of the race, he was texting them in a panic, trying to figure out what was going on.

“I haven’t tried,” Berlusconi said. “I just want to focus on the dogs and focus on the race. Try to enjoy it and try to take care of the dogs.”

Berlusconi said the lack of information helps him focus on getting rest and taking care of the dogs.

“It’s nice not to have your little phone and say, ‘Oh, let’s check Facebook. What’s new with Instagram,’” he said.

On Thursday morning, he reminisced about his trip over Rainy Pass.

“It was windy as hell. It felt thrilling,” he said. “I don’t know how fast the wind was, and I don’t care.

"It was without a doubt one of the highlights of my life.”

In April, Berlusconi’s visa is up. He doesn’t know if he’ll even be able to fly back to Italy, or if he’ll be allowed out after he gets there.

Later Thursday, the Iditarod announced that Jeremy Keller scratched from the race in Nikolai “due to current events” and started mushing back to Willow to be with family.

Musher Larry Daugherty, an Eagle River radiation oncologist, learned his plan to start climbing Mount Everest on April 11 was foiled because both China and Nepal have shut down expeditions.

Hours later and 96 miles down the trail, word of the coronavirus fallout had spread from the cabin to the dog yard. Prior to getting word from Drobny, Aliy Zirkle said she hadn’t heard a word about the coronavirus since the start of the race Sunday.

“My biggest concern is whether to put salmon or turkey in their meal,” she said of feeding her dogs.

Zirkle was processing the flood of information while pouring melted snow into her Mountain House freeze-dried beef stroganoff dinner.

“In our global world, how could you possibly keep it from spreading?” she said.

Daugherty, back in Takotna, was finishing up his 24-hour rest. He said he’s had zero contact with life off the trail.

“(Iditarod) is in some ways the last thing you’d want to do before climbing Mount Everest, but right now maybe it’s the best thing to be doing, just to be isolated from it," he said.