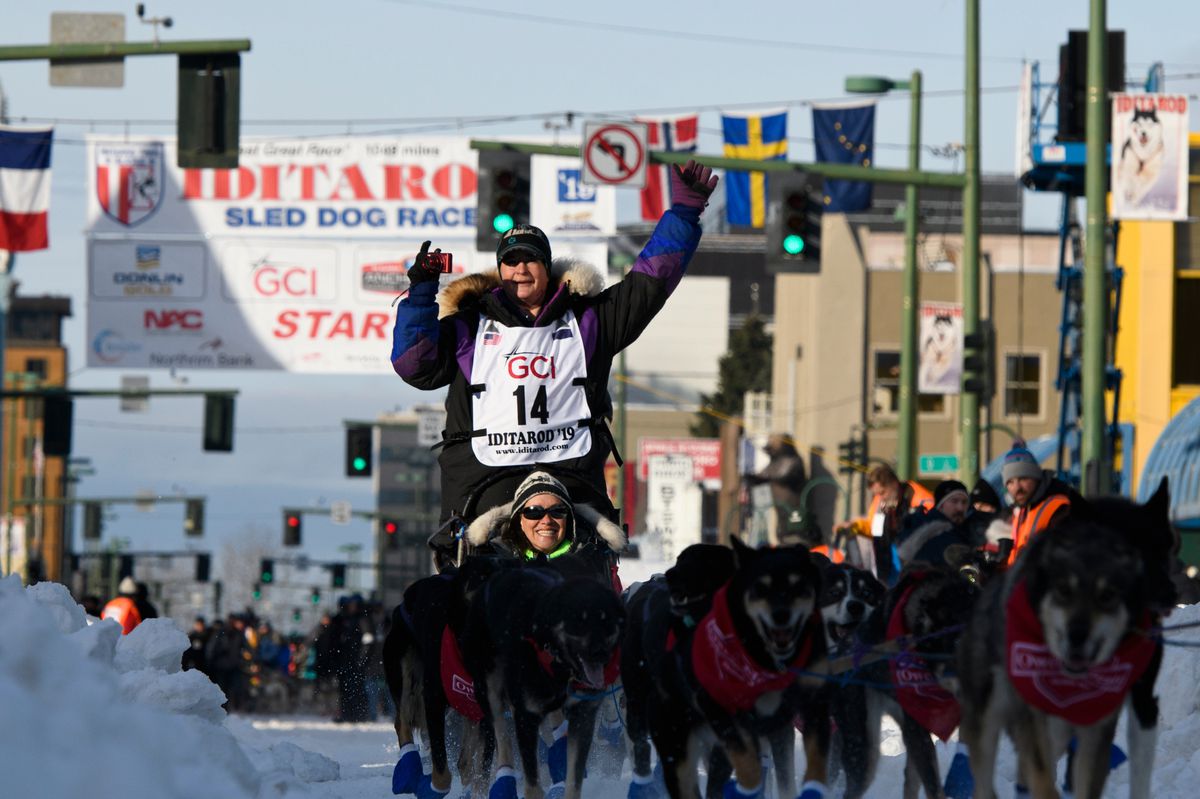 Jessie Royer of Fairbanks waves to spectators as she leaves the 4th Avenue starting line in the ceremonial start of the 2019 Iditarod Trail Sled Dog Race in Anchorage. (Marc Lester / ADN)

Jessie Royer of Fairbanks waves to spectators as she leaves the 4th Avenue starting line in the ceremonial start of the 2019 Iditarod Trail Sled Dog Race in Anchorage. (Marc Lester / ADN)

The race is set to continue with pandemic precautions in place but will not hold the usually crowded event in Anchorage due to concerns over a large gathering downtown amid the COVID-19 pandemic.

The ceremonial start would have happened on Saturday, March 6. The start of the race is still on for Sunday, March 7 at Deshka Landing in the Susitna Valley.

“While the Iditarod believes the future does not belong to the fainthearted, we take the health and well-being of our racers, volunteers, staff, and spectators very seriously,” Iditarod CEO Rob Urbach said in a written statement.

“After consulting with our stakeholders and in consultation with the Municipality of Anchorage, we decided to cancel our traditional ceremonial start in Anchorage due to the COVID-19 concerns of a large gathering.”

The cancellation will have a major impact on an already hurting downtown Anchorage, said Amanda Moser, executive director of the Anchorage Downtown Partnership. From a drop in tourism to a lack of traffic among people who used to work or see shows downtown, the area has borne the brunt of the pandemic, she said.

The partnership has put together multiple socially distanced events downtown, from yoga in the park to a drive-in New Year’s Eve celebration. They reached out to the Iditarod to brainstorm ways to continue the ceremonial start and met once with the organization in January, Moser said.

“Then we heard this week that the city was sort of in the final talks and that it looked like it was not likely that it would happen downtown, and the impacts will be huge on downtown,” Moser said.

The past week was what Moser characterized as a blow to downtown businesses. Canada banned cruise ship voyages for the 2021 season this week while the ceremonial start announcement came shortly after. It feels like the challenges just keep coming, she said.

“So many of our downtown, locally owned businesses are just hanging on,” Moser said. “And these two things will have significant impact.”

The ceremonial start is expected to resume come March 2022, the statement said.

Usually a 1,000-mile race across Alaska, the elimination of the ceremonial start means the 2021 iditarod won’t take mushers to Anchorage or Nome.

In December, race officials unveiled a new course that keeps the race out of Nome and several villages that have long served as checkpoints in the second half of the race.

Teams will race a shorter course of about 860 miles that starts and finishes at Deshka Landing. They’ll travel to the ghost town of Iditarod — the traditional midway point of the southern route — and a bit beyond to a ghost town called Flat, which never before has been visited by Iditarod mushers. Then they’ll return to Deshka Landing, making a second crossing of the Alaska Range to get there.

Related: On the revamped out-and-back Iditarod route, Skwentna will be the site of mushers’ final layover