Iditarod update: With layovers in play, the race becomes a guessing game 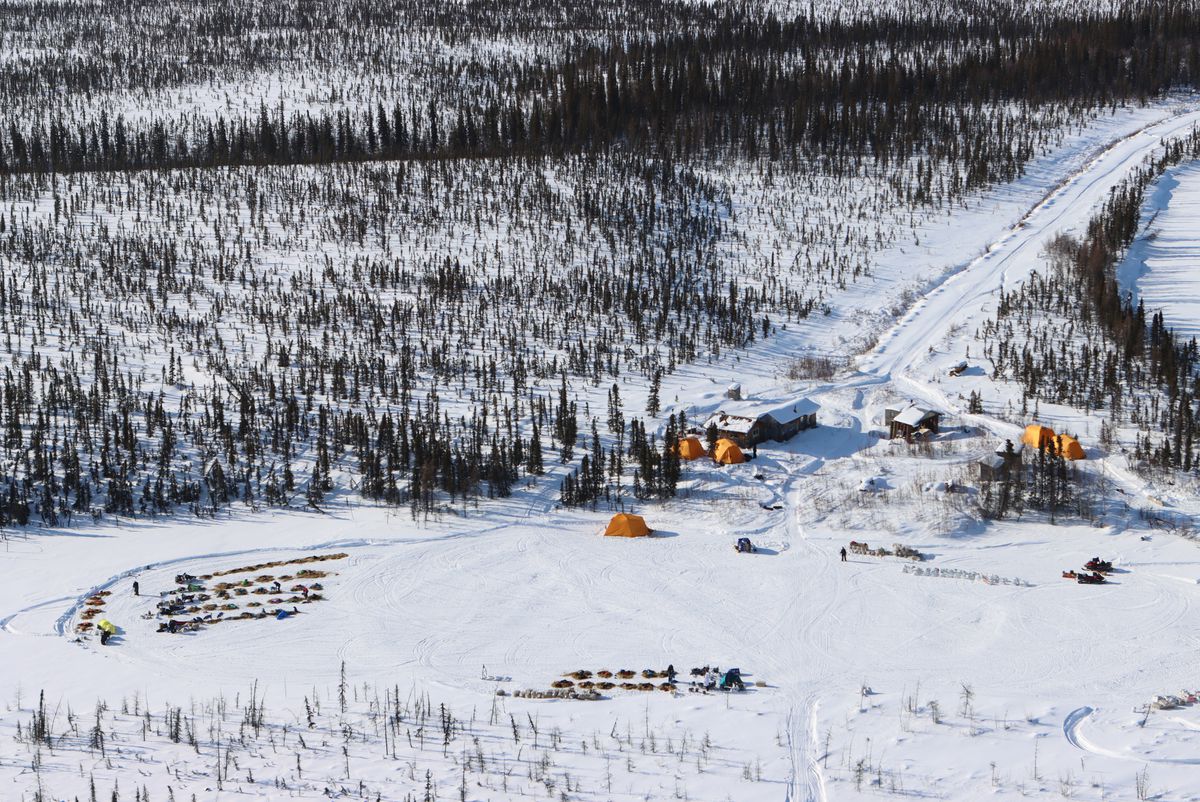 An overhead shot of the Ophir checkpoint, which was relocated from the other side of the airstrip as a COVID-19 precaution. (Zachariah Hughes/for ADN)

An overhead shot of the Ophir checkpoint, which was relocated from the other side of the airstrip as a COVID-19 precaution. (Zachariah Hughes/for ADN)

Dallas Seavey was the first musher to reverse course in this year’s round-trip race when he left the Iditarod checkpoint on Thursday afternoon. He was followed an hour later by Ryan Redington, who has logged eight more hours of mandatory rest time than Seavey.

A total of eight mushers were out of Iditarod by 7:30 p.m. Thursday. Richie Diehl, Pete Kaiser and Joar Leifseth Ulsom all left within an hour of Redington after brief stays at the checkpoint, and Wade Marrs followed a bit later after a four-hour rest.

At 7 p.m., Aaron Burmeister of Nome/Nenana blew through the checkpoint. He was the seventh to leave Iditarod, but among the front-runners he is the only person other than Redington who has taken two of the race’s three required layovers.

Mushers have options for when they can take two of the layovers, but they have to take their final eight-hour break at Skwentna on the southbound trip.

At 7:02 p.m. Brent Sass of Eureka was also back on the trail. He was first to reaching Iditarod on Wednesday and stayed there for his 24-hour break.

ON THE TRAIL: Dallas Seavey and Travis Beals pulled into an ice-cold Iditarod checkpoint late Thursday morning, joining three other mushers at the remote spot — and seizing the advantage in the Iditarod Trail Sled Dog Race.

Seavey, a four-time champion from Talkeetna, and Beals, a veteran from Seward, have both completed their mandatory 24-hour layovers. The three teams that got to Iditarod before them — Brent Sass, Aaron Peck and Mille Porsild — have not.

Temperatures were minus-20 and below in the 120-mile stretch between McGrath and Iditarod.

Iditarod is 416 miles into the 832-mile race. Once mushers begin to leave Iditarod, two-way traffic will become part of the race for the first time in 49 years. The Iditarod was a point-to-point race until this year, when COVID-19 concerns prompted a route change that made it a round-trip race.

Sass had taken none of his mandatory 40 hours of rest prior to reaching Iditarod and appears to be taking his 24-hour break there. If so, he’ll be able to leave sometime between 6-7 p.m. Thursday.

Back in Ophir, 80 miles from Iditarod, teams were pouring onto the trail all morning, many coming off 24-hour stops. Jessie Royer was the first to leave at 2:04 a.m., and within 71 minutes Joar Leifseth Ulsom, Pete Kaiser, Richie Diehl and Wade Marrs had all followed. All have completed their 24s.

A little later, Ryan Redington (3:40 a.m.) and Aaron Burmeister (4:39 a.m.) left Ophir, and they might own the biggest advantage of everyone.

They are the only front-runners who have completed two of the three mandatory breaks — a 24 and the first of two 8-hour layovers. The final 8-hour break comes near the end of the race on the southbound trail at Skwentna, 67 miles from the Deshka Landing finish line.

OUT OF THE RACE: Christopher Parker, a rookie from Fairbanks, scratched Thursday in McGrath. He had eight dogs in harness at the time.

He was the fourth musher to scratch and the fifth who is out of the race from the original field of 46. Minnesota’s Gunnar Johnson was withdrawn Wednesday after testing positive for COVID-19 in McGrath.