Mushers at the Iditarod’s midpoint prep for a new challenge: Head-on traffic 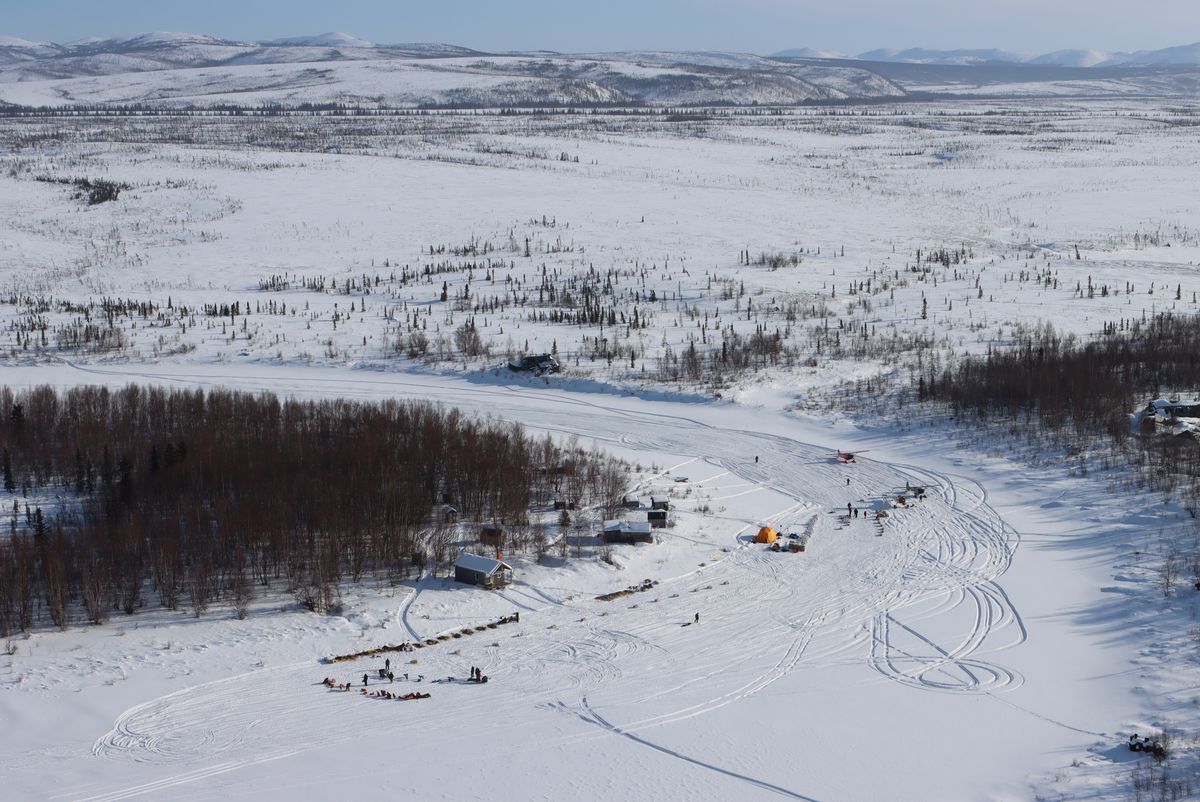 The checkpoint of Iditarod is nestled in a bend in the Iditarod River. It's both the halfway point and the turnaround point in this year's race. (Zachariah Hughes/for ADN)

The checkpoint of Iditarod is nestled in a bend in the Iditarod River. It's both the halfway point and the turnaround point in this year's race. (Zachariah Hughes/for ADN)

IDITAROD — Dallas Seavey arrived at the Iditarod Trail Sled Dog Race checkpoint here four minutes before Travis Beals, just before noon Thursday, and the two shouted back and forth as they handled dog chores. They discussed trail conditions, noted breeding lineages and even reflected on a particularly big, gangly dog Seavey used to run.

“She was ugly as sin,” Seavey said.

Though they were not the first to reach Iditarod — the halfway point and turnaround point this year — both were well positioned for the next stage of the race.

But each was thinking about a new variable they’d face in the hours ahead: dozens of chase-pack mushers passing them head-on as they race backward toward Ophir in this year’s novel out-and-back route.

“I was definitely thinking about that coming over, looking at the trail, thinking, ‘Man, I would hate to meet a team right here,’” Seavey said.

[As the Iditarod prepares to shift into reverse, mushers dread what’s ahead]

He used his knife to cut small blocks of snow to cram into his cook pot and melt for water.

“I just hope that everybody slows it down just a touch, acknowledges that they can run into a team on any corner,” he said.

Seavey was about to change the runner coatings on his sled, swapping out wide strips of plastic designed to float atop heavy snow for thinner ones with a bit more purchase.

“It also doesn’t edge very well,” Seavey said of the floaters. “So for precise steering, it’s not exactly what you want. And I don’t want to be running into someone else’s dogs.”

Nearby, Beals, who lost his knife down the trail, was liberating hunks of snow to melt by kicking the ground with his boot. He was aware of the head-on passing to come, but not daunted.

“My dogs pass pretty darn good. But I guess all you can really do is train your team,” he said. “There’s probably gonna be some tight spots where you meet a team that you wish you didn’t.”

Aaron Peck of Calgary shared that sentiment. He arrived in Iditarod late Wednesday night to take his 24-hour layover and was finally getting around to hitting his sled with an ax to clear ice that had been stuck to it since crossing overflow on the way to McGrath.

“There’s certain spots (where) if we meet a team it will be a disaster. But hopefully, we won’t meet a team there,” Peck said.

Most sections of the trail are just wide enough for teams to edge past one another, with a few stretches that unwind from each other into parallel tracks. But there is almost no margin of error in places with steep climbs and tight turns on wooded hills.

“This would not be good. This would be like a big head-on collision,” Peck said. “I’ll have to get out of the way quick if somebody’s coming down.”

“Most of it will be fine. You just gotta hope you don’t smack into a team.”

It was a cold day on the Iditarod River. A few people grumbled about minus-30 temperatures the night before that rendered the propane tanks set up to heat their tents inoperable, making for chilly sleeping.

The only fire going midday was a cooling heap of trash embers at the bottom of a charred burn barrel. It kicked up thin plumes of smoke but no heat at all.

Just about the only place to warm up was an old cabin. Almost a dozen volunteers and pilots were crowded inside at lunchtime, waiting for a man with a long beard to finish cooking halibut tacos.

No one inside wore a mask, despite news the previous evening that musher Gunnar Johnson withdrew from the race after testing positive for the coronavirus in McGrath. Boxes of disposable blue surgical masks sat unopened in the cabin’s cramped Arctic entry.

There is not much left of the bustling mining town that sprang up here more than a century ago on the banks of the Iditarod River, a mainstay on old freight and gold hauling routes for a few years during Alaska’s territorial days.

The checkpoint itself is a few buildings in various states of habitability, from a new cabin devoted solely to mushers to derelict shacks somehow still standing.

Though he’s taken his 24 here numerous times, Eureka’s Brent Sass has never been able to fit in a field trip to explore the ruins of the race’s namesake. He’s too busy sleeping, hydrating and rebuilding his energy for the second half of the event. The real race.

“I rest better not being in the checkpoints,” said Sass, who is known for blasting through race checkpoints and camping alone with his team down the trail.

“They rest better in a place where it’s quieter,” he added.

Sass was the first musher to reach Iditarod, part of his to plan to stay at the front of the pack so there is barely anyone around while he and his dogs rest.

He was unfazed about the trail ahead. Not the passing, not the last-minute alterations to the course, not re-crossing the most hazardous parts of the route.

Sass was in the last few hours of his mandatory rest and was handling his dog chores with vigor, walking in great long strides up his gang-line. Until he arrived here Wednesday evening, he had not slept since the start of the race.

By Thursday afternoon he’d had two naps and was ready to accept his award for being the first musher to reach the halfway point. He had his choice of $3,000 in gold nuggets or a smartphone with a year’s worth of free service from GCI.

Seavey was the first musher to set off on the southbound trail. Ryan Redington of Skagway pulled in 45 minutes later, quickly declaring he wouldn’t be staying. Even though they ran through the warmest part of the day, his dogs had frosted muzzles, whiskers and eyebrows. Redington’s heavy outer mitts made of skunk pelts were covered in ice, too.

True to his word, Redington did not linger.

Twenty-one minutes after his departure, from a plane overhead, Redington could be seen passing an approaching team. It was one of the first head-on passes, one of dozens in store as front-runners head backwards toward Ophir, McGrath and the Alaska Range.

From several hundred feet above, the two long strings of dots appeared to slow slightly, mingle briefly, and move on without incident.