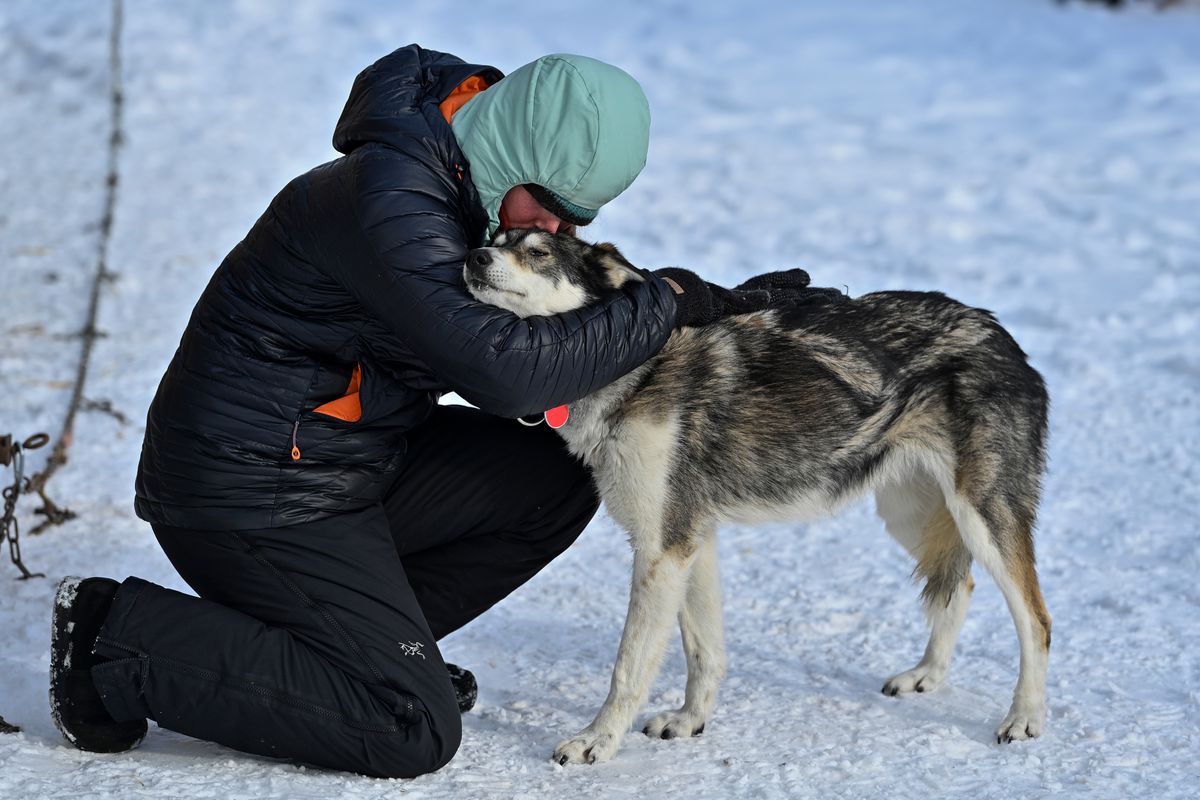 Sable gets a hug from Paige Drobny. (Marc Lester / ADN)

Sable gets a hug from Paige Drobny. (Marc Lester / ADN)

DESHKA LANDING — To prepare Sable the sled dog for long, cold nights on the Iditarod Trail, a vigorous plan was deployed by mushers Paige Drobny and Cody Strathe.

“She slept outside one night,” Strathe said after the 10-year-old female helped pull him to a career-best 20th-place showing Tuesday in the Iditarod Trail Sled Dog Race.

Sable loves her people and her special status as a house dog at the couple’s Squid Acres Kennel in Cantwell.

After Drobny and Strathe finished within a couple hours of each other Tuesday morning at Deshka Landing, all of their dogs but Sable were placed inside dog boxes. Sable remained outside, sleeping in the sunshine while off-lead.

“She’s a little shy dog that basically doesn’t like anyone else except us,” Strathe said. “You look at her and she doesn’t look like a super athlete or anything, but she’s an amazing dog. She basically does it because she loves us. She also lives in the house all winter. She slept outside one night before the Iditarod to get ready. Otherwise she’s a couch dog that also runs 4,000 miles each winter.”

A veteran of multiple Iditarods and Yukon Quests, the 2021 Iditarod was Sable’s 15th race of close to 1,000 miles.

“She’s finished all but two and those two we scratched, so she did every mile she could,” Strathe said.

Sable, who often runs in lead, is the perfect dog, Drobny said.

“She’s like my best friend. She follows me around everywhere,” she said. “I always like looking at the dogs like, if they were human, what they would be like, and she would be like the student at the front of the class that was always perfect and always raised their hand and had the right answer and was nice to everybody.

“The only way I can describe her is she’s just perfect.”

Sable is sort of like the weekend warrior who runs a marathon Saturday morning and spends the rest of the week chilling on the couch, and she’s never too far from Drobny or Strathe.

“She lives inside, and if we go outside to do something, she comes out with us. She goes for puppy walks and then she’ll go and run a thousand miles and come back and get back on the couch,” Drobny said. “She’s an incredible athlete at 10 years old, to be able to do that and not have any arthritis or any stiffness. (She’s) never sore, she’s always happy, always ready to go on an adventure.”

Sable missed last year’s Iditarod because she had to have a tumor removed. Drobny said it was the first time in about eight years that Sable wasn’t on her team, and there was a moment when she thought about bringing the dog along as a passenger.

“I was like, ‘I don’t know if I can do it without Sable,’ " she said. “I wanted to take her and just carry her in the sled and then I could put her in if I needed her — which is so asinine, right? It doesn’t make any sense. She’s like my little safety blanket or something.”

This year, Sable ran on Strathe’s team, and it was likely her final 1,000-mile run, Strathe said.

She’ll retire to a familiar spot on the couch.