‘Not in it for the glamour': How this Alaska mushing couple went from 2 dogs to 54 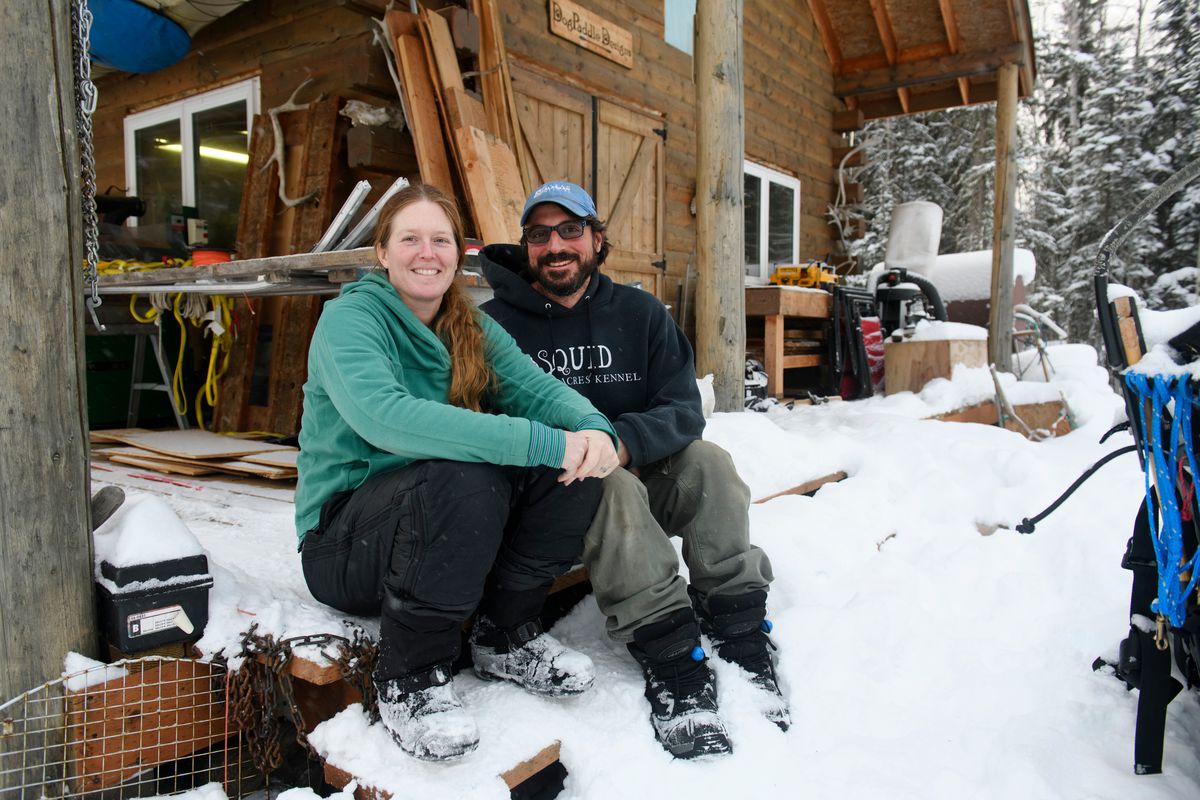 FAIRBANKS — Paige Drobny cheered in a snowy finish chute in Fairbanks last month with a bottle of Champagne in one hand and a makeshift trophy in another as her husband, Cody Strathe, and his 11 sled dogs arrived.

It was shortly after 3 a.m., and Strathe had just finished 12th in the Yukon Quest 1,000-mile International Sled Dog Race. Both bundled in jackets, Drobny gave Strathe the prizes that friends helped cobble together by, in part, emptying the junk from their pockets. They laughed. She opened a can of beer for him. His dad took photographs. A crowd of about a dozen cheered.

Drobny, a 44-year-old fisheries biologist, and Strathe, a 41-year-old archaeologist who also builds sleds, have been fixtures of the two long-distance races for about six years.

While the couple has yet to command the same level of attention as the sport’s top contenders, they have quietly built an impressive resume and earned the respect of fellow mushers, all while holding down a non-dog consulting company plus other jobs. The easygoing couple said they’re just having fun.

“They’re not in it for any glamour, or anything other than for the love of the dogs,” said their friend Brent Sass, a Eureka musher who won this year’s Quest. “They’re a good example of people who are living the dream.”

It started with a wooden sled

Some Iditarod mushers have always dreamed of competing in the event, likened to the Super Bowl for mushing. But Drobny and Strathe didn’t. They said they had always liked dogs, the outdoors and adventure. Then it just sort of happened.

Sometimes you throw yourself into a hobby and it becomes your life.

“There’s no big master plan,” Drobny said. “If we’re having fun and it feels right, then we do it.”

Drobny and Strathe met in Seward in 2004 after Drobny drove up in a camper van with her black Lab named Yogi to take a job as a fisheries biologist. Strathe was teaching marine science in town and had a husky named Keetna. As winter approached, Drobny didn’t want to sleep in her van anymore, and Strathe needed a roommate.

Eventually they started dating and moved north to earn their master’s degrees at the University of Alaska Fairbanks.

In Fairbanks, the couple took their dogs skijoring, and went out to cabins with friends who had small, recreational sled dog teams. Once, they went out to the remote Tolovana Hot Springs, accessible by a hilly, 10-mile trail. They struggled on skis, carrying backpacks. Friends glided by with sled dog teams, carrying kegs of beer.

“We were like, ‘You guys aren’t working at all. That looks awesome,’” Drobny said.

For Christmas in 2006, Strathe built Drobny a wooden dog sled. Sure, he’d built kayaks before, but never a sled. The handlebars went up to her chin.

Instead of studying for her exams, Drobny searched for dogs while Strathe visited his family in Wisconsin.

“I got a phone call from her a couple days later that she got three dogs from the shelter somewhere,” Strathe said. “So suddenly we had five dogs and we were off and running.”

‘There wasn’t a bad dog out there’

They got more dogs. They never intended to race, just to go outside and explore, Strathe said.

Then, in 2009, Sass encouraged Drobny and Strathe to sign up for their first 200-mile sled dog race. He even lent them some dogs.

“He was kind of a bad influence on us,” Strathe said.

He described their first race as “Type 2 fun” — miserable in the moment, fun after it’s over.

It snowballed from there: Drobny and Strathe bred dogs. They signed up for 300-mile races, and wished those trails were longer. In 2012, Drobny competed in her first 1,000-mile Quest, placing 14th. The next year, Strathe placed 15th in his first Quest and Drobny finished 34th in her first Iditarod a month later.

Every year since, either Drobny or Strathe and their sled dogs have shown up at the Iditarod and Quest starting lines. In 2016, they both completed both races, crossing the finish lines one after the other. They said they like the feeling of overcoming challenges on the trail, watching their team perform and — what got them started in the first place — traveling in the wilderness with their dogs.

“There’s something about the dogs being in front of you and working so hard that makes you push yourself that much more and it’s always super rewarding,” Drobny said.

Now, they have 54 dogs at their kennel in the hills outside of the city of Fairbanks. They call it Squid Acres Kennel because Drobny studied squid in grad school. It overlooks spruce trees and provides easy access to training trails.

The couple said they don’t have any particular ways they determine who runs which races each year and with which dogs. It’s an annual conversation. This year, Drobny took the kennel’s A-team on the Quest, and Strathe took the younger dogs. Since Drobny and her team were ahead, she said, she left Strathe messages along the way.

“I was trying to tell people at the hospitality stops and stuff along the way to tell him I said hi and he’s doing great and I loved him," she said.

The business of mushing

But it’s not all sled-dog training and racing for Drobny and Strathe. Having 54 dogs is expensive, and it’s kind of like living on a farm, Drobny said. There are no sick days, no vacation time.

"I mean, it’s a great lifestyle. I love it,” she said. “But there’s so many challenges year-round that come with it, you know, like we’re constantly doing logistics, constantly having to find people to help us, constantly trying to find sponsorship and money to, like, make it all happen and it’s tiring.”

“But if you think about it as a job, it’s the coolest job you could have,” Strathe said.

“It is the coolest job,” Drobny said.

The couple does sled dog tours and has two businesses to help pay for their kennel: Spearfish Research, a fisheries and archaeology consulting company, and DogPaddle Designs, the company for Strathe’s handmade dog sleds and boats. Strathe estimated he made at least a third of the sleds for this year’s Quest mushers, including Sass.

It’s all a big balancing act, but both Drobny and Strathe said they can’t imagine life without dogs.

As Drobny travels the Iditarod Trail, Strathe will run tours. He plans to eventually meet her at the finish line in Nome.

This year, Drobny is hoping to break into the Iditarod’s top 10, improving over her best-place finish of 25th in 2014. Her dogs can do it, she said, and she’ll see if she can too.

"It’s been a steep learning curve,” Drobny said. "I think we’re doing pretty well for where we started.”