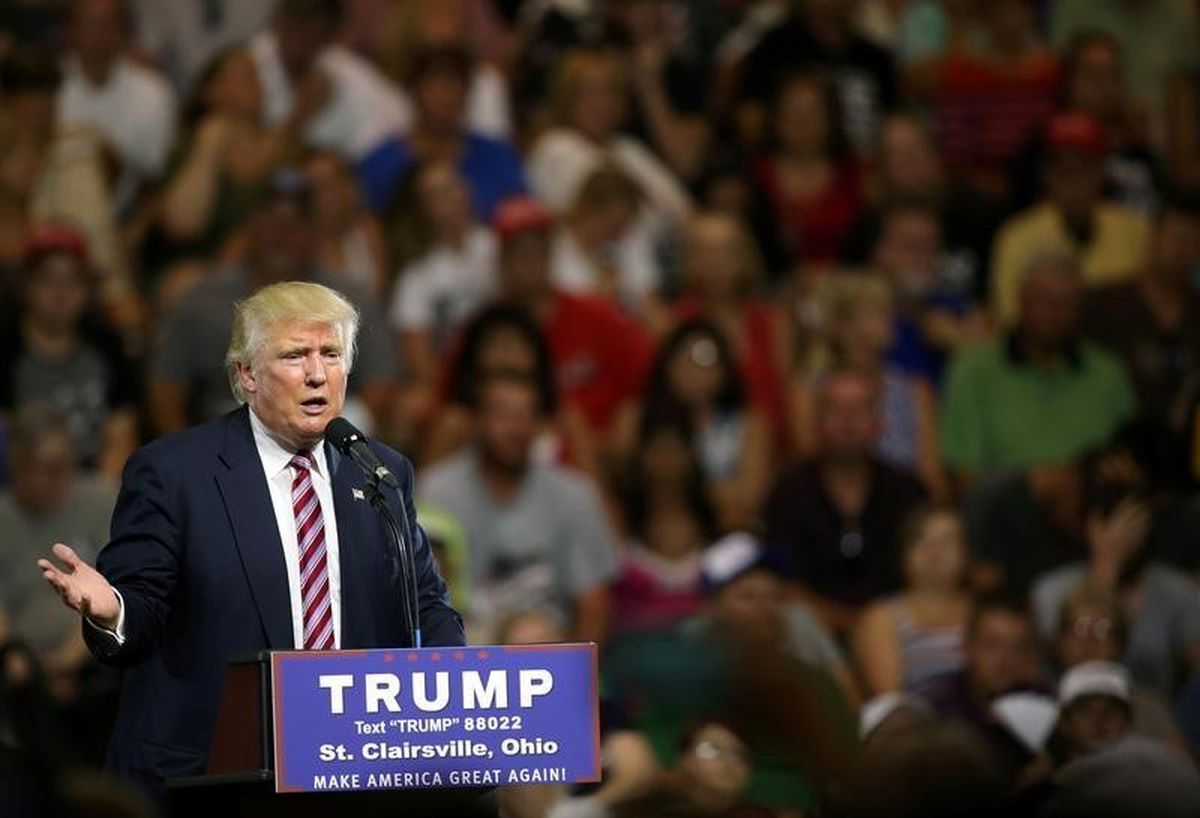 WASHINGTON — Alaska has its share of Donald Trump fans, but the state's delegation to the Republican Party convention in Cleveland is not unanimously behind him.

With just more than a week until the Republican convention, some of Alaska's delegates are making peace with a nominee who they say isn't their ideal pick. Most, however, say he is a better choice for Alaska than presumed Democratic nominee Hillary Clinton.

In interviews with the Alaska Republicans who are headed to the convention to represent the state's presidential preference, quite a few were reluctant to fully support Trump, citing a broad range of concerns. And delegates who are excited about the prospect of a Trump presidency are worried too, about the impact of opposition to and criticism of Trump from Republican party leaders.

The tempered enthusiasm of some Alaska Republicans mirrors that of the state's congressional delegation. Sens. Lisa Murkowski and Dan Sullivan and Rep. Don Young plan to support "the nominee," but not without directing criticism toward Trump on myriad issues, from his stance on restricting Muslim travel to his comments about the judge overseeing a fraud case against Trump University, comments that many considered racist in nature.

That reticence appears reflected in their convention plans: Young and Murkowski, citing a fast-approaching August primary, will not attend their party's four-day convention starting July 18. Young, the current longest-serving Republican in the House of Representatives, and Murkowski, who chairs the Senate energy committee, join a growing cast of Republicans who find themselves too busy to attend the convention. (Young has usually skipped the event in the past, he said.)

"I am using every day plus every hour in every day to get out across the state the minute that we get out of here," Murkowski said last month regarding her plans to skip the convention to campaign. "So the convention is very important, but what is more important is for me to be up in the state meeting with new voters, new people who might not know me, and really kicking it into high gear in that one month that I have."

In skipping the convention, Young and Murkowski join at least nine Republican governors, and other high-profile GOP senators including Kelly Ayotte of New Hampshire, Mark S. Kirk of Illinois and Marco Rubio of Florida.

Sullivan plans to attend the first few days of the convention, according to his spokesman Mike Anderson. Members of Alaska's convention delegation said he is scheduled to host and attend receptions in Cleveland. But leaving before the end of the convention signals that he isn't terribly interested in witnessing Trump accept the nomination on the final night in Cleveland.

Nationwide, some states' convention delegates have bowed out, citing opposition to Trump. But that's not the case in Alaska, where most delegates — even if not huge fans of the real estate mogul — say they are ready to follow the rules and cast their votes.

At least one delegate has decided to pass on attending the Ohio fete, but cited family reasons. Suzanne Downing, communications director for the Alaska Republican Party, also recently decided to give up her hotel room and stay in Alaska.

Downing said she "can't fix Cleveland," and did not elaborate, but said her main purpose for staying back in Alaska was to focus on the upcoming primary, rather than taking weeks to organize events in Cleveland.

Trump does have his fans in Alaska, and those include some enthusiastic delegates who say that he's what's needed to shake up Washington.

But quite a few delegates remain unconvinced or unenthusiastic. They largely cite concerns about Trump's temperament and how he treats others, including other candidates.  Several raised questions about the candidate's policy chops, but generally said that could be managed with good staffing and a knowledgeable vice president pick.

Erick Cordero, a Rubio delegate from Palmer, is not ready to board the Trump train.

"Personally, in good conscience, based on what I have heard at least in the last several months, I cannot possibly bring myself to vote for Donald Trump," Cordero said in an interview. But he's open to changing his mind: "That might change at the convention. But as of today, I don't believe he's presidential material."

Cordero said Trump has not demonstrated much knowledge of public policy issues.

"I think he's been concentrating more on emotional issues that bring up people's frustrations and anger than actually talking about how we're going to fix our economy" and infrastructure and keep the country safe, he said.

Another key reason: "how he treats others," Cordero said. "For me, somebody that is going to be in charge of being able to declare war against other countries" needs to have a better temperament.

Judy Eledge of Anchorage is leading the party's delegation for Sen. Ted Cruz, and also said that while Trump was not her choice, she planned to keep an open mind.

"I think he's better than Hillary Clinton," she said of Trump. "He wouldn't have been my choice but I'm going to give him a chance."

Eledge counts herself as a rule-follower, and said she has no intention to help upend Trump's nomination in Cleveland. While nationally there has been some chatter about an alternative candidate, nobody has contacted Eledge, she said.

"So if there's some kind of opposition, I'm not aware of it. I think, personally, that would be a mistake," she said, noting that Trump got the most votes nationally. "I think we have a system, and to make it legitimate and fair, you have to follow the rules in the system."

Eledge said she wishes Trump were a bit more attuned to how the government is run, and hopes he will pull in — and listen to — good political advisers.

And she isn't pleased with some of Trump's prior behavior toward other Republican candidates. Trump cannot "expect everyone to just be OK" after some of his attacks on other candidates, Eledge said. It "says a lot about a man's character when you will do things like that. And that is my biggest issue with him."

Will Treadwell, son of former Lt. Gov. Mead Treadwell and a first-time delegate who is pledged to Rubio, said he is resigned to Trump winning the nomination. But he has told Republican National Committee staff not to put him down as a delegate favorable to the presumed nominee.

It appears unlikely at this point that delegates will end up voting "unbound" to their particular candidate, since Trump has a strong majority of delegates. But of voting for Trump, Treadwell said, "If there's any option to, I wouldn't."

Kristie and Tuckerman Babcock, Trump and Rubio delegates, respectively, are not necessarily Trump supporters but say he has still earned the nomination.

"Trump was not my first choice, but he certainly is due his number of delegates," Kristie said. "I plan on going in with an open mind."

And, she said, "I think Trump is 100 percent better than Hillary Clinton or Bernie Sanders. That sums up my enthusiasm for Trump."

"I'm going to defer to the collective wisdom of my party," said her husband, Tuckerman Babcock. "They want Donald Trump, and I want Hillary Clinton defeated."

To be sure, some members of the Alaska convention delegation are more enthusiastic.

Jim Crawford is co-chair of Alaska for Trump, a delegate and a member of the platform committee. It's his fifth or sixth convention so far, he said.

Crawford is not concerned that anti-Trump Republicans may take the nomination away.

"What these guys are doing is talking, because they don't have the votes," he said.

Crawford sees Trump as an agent of change in Washington, D.C., and has found the campaign fun to watch, he said.

He pointed to Clinton's objection to drilling in the Arctic National Wildlife Refuge and offshore in the Arctic as a reason why Trump is a better fit for Alaska.

"I think on the issues, Trump is our guy," he said, pointing to Trump's stance on immigration, the Second Amendment and his military "approach."

While Crawford wants to see change in Washington, he's still on board with re-electing Sen. Lisa Murkowski and Rep. Don Young.

"Lisa Murkowski represents our priorities," and "Don is a classic," Crawford said, noting that both hold key senior leadership positions.

As for the Republican leaders who aren't going to Cleveland, Crawford says that's "their loss," and to him, it is "certifiably insane" to skip out on the party's main event.

Murkowski should come to the convention, Crawford added. It is a "good opportunity to highlight the energy plank in the platform."

Cruz delegate Mike Tauriainen of Kenai said that while Trump is "a little difficult to figure out" because of shifting policy positions, he thinks "that he's very, very capable and could make a very good president."

Tauriainen said he thinks some members of the Republican establishment may remain reluctant to support Trump after the convention, but that he plans to push for party unity, "rallying behind our candidate and coming out of Cleveland with some enthusiastic support" for Trump.

Doyle Holmes of Willow is a Trump delegate at the convention and said that the party's power brokers don't "have a clue about just how mad people are."

Holmes said he is "tuned into the same thing that a lot of Trump supporters are tuned into, and that's the fact that they're just tired of their elected representatives not doing what they said they were going to do when they got elected."

That said, Holmes is still planning to vote for incumbents Murkowski and Young in the fall, and said he can "understand their reluctance to commit to Mr. Trump right now."

The convention could "be a mess," Holmes said. "I hope that it doesn't turn into an embarrassment down there for the Republican Party."

Note: This article has been edited to include the correct last name of Alaska Sen. Dan Sullivan's spokesman. His name is Mike Anderson, not Mike Sullivan.