As clock ticked toward session, Alaska lawmakers turned to lobbyists for cash 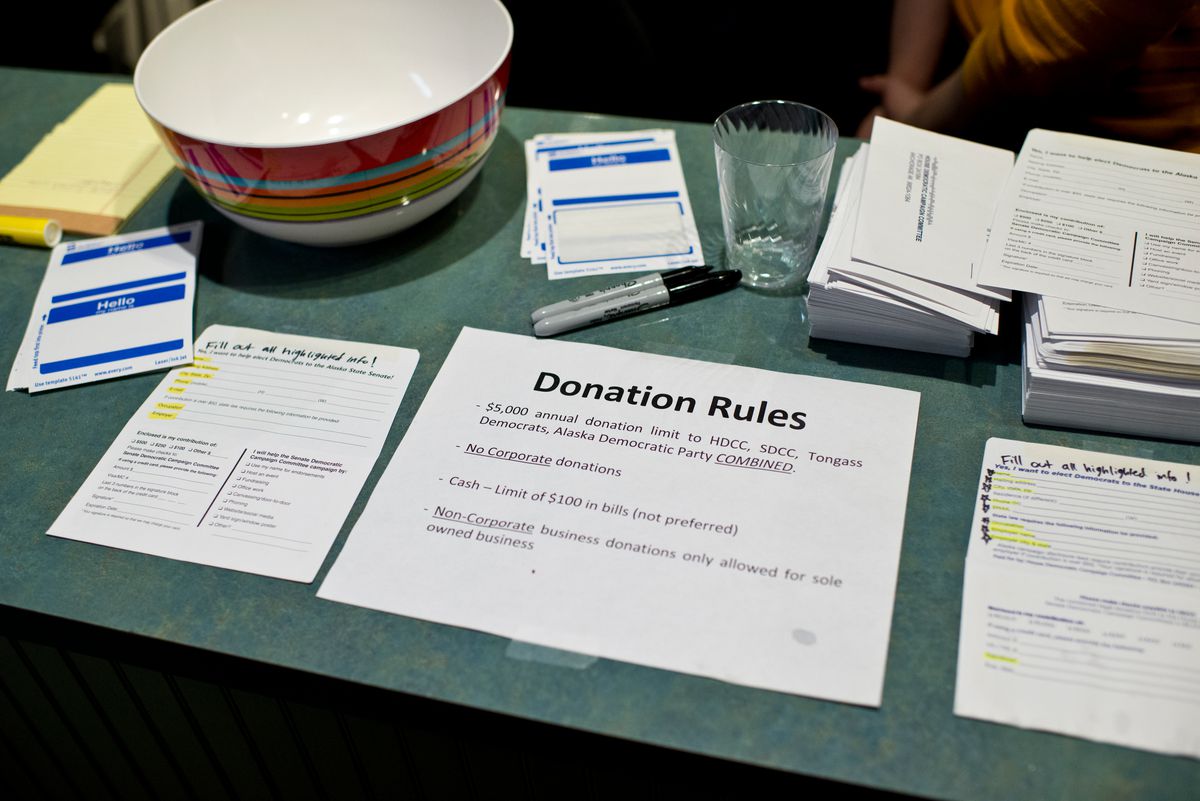 Signs at the front table of a Democratic fundraiser spell out donation rules at the Juneau-Douglas City Museum. Democrats and Republicans both held fundraising events on the night before the legislative session began in Juneau on Jan. 16. (Marc Lester / Alaska Dispatch News)

Signs at the front table of a Democratic fundraiser spell out donation rules at the Juneau-Douglas City Museum. Democrats and Republicans both held fundraising events on the night before the legislative session began in Juneau on Jan. 16. (Marc Lester / Alaska Dispatch News)

But the law doesn't stop them from collecting checks the night before. And on Monday, less than 24 hours before the state House and Senate would gavel in, Democratic and Republican legislators held their annual presession events.

Two different fundraisers — one for each party — were held in the evening, with Republicans in a waterfront ballroom and Democrats in a rented museum across the street from the Capitol.

A handful of lobbyists walked the four rainy blocks between them. Their checkbooks weren't soggy enough to keep them from writing checks at both venues.

The session-eve fundraisers are a long tradition in Juneau. And lawmakers say the lobbyists' donations have no effect on the official actions they take starting the very next day.

But the events could project an increasingly problematic image for Alaska legislators as they balance competing interests in their efforts to close the state's massive budget deficit.

He added: "Nothing says that more than having fundraisers on the night of Martin Luther King Day."

[The first week of Alaska's 30th legislative session, in photos]

Lobbyists aren't the fundraisers' only participants. Both gatherings this year drew legislative staffers, local party activists and a handful of state government workers.

But compared to campaign-season fundraisers leading up to elections in November, where candidates tout their political visions, Monday's events were light on policy and instead seemed geared toward introducing elected officials to the audience — which included at least nine lobbyists at each one.

"Chat with us and talk about the upcoming opportunities that we have with all these excellent Republicans representing you and the great state of Alaska," Anchorage Rep. Charisse Millett, the leader of the House GOP minority, told the crowd, as attendees noshed on smoked salmon croquettes and crab-stuffed peppers.

Lobbyists are banned from donating directly to legislative candidates, except those seeking to represent the lobbyist's own House or Senate district.

But they can donate thousands of dollars at the presession events, which technically raise money for party committees, not lawmakers' campaigns — though the parties often distribute cash to the campaigns of individual legislators.

Democrats have traditionally raised less, though that was expected to change this year, since the party's members have more power in the House after forming a majority coalition with a few Republicans after the November election.

Their event — where donors were plied with chips, vegetables, wine and beer — drew dozens of people to the Juneau-Douglas City Museum, including one new legislator's parents.

Democratic lawmakers said this week that they haven't tallied the amount they raised Monday, while the top-ranking GOP leaders in the House and Senate refused to be interviewed.

Lobbyists wouldn't speak publicly about the fundraisers, saying that doing so could jeopardize their relationships with legislators. Privately, several said they feel some pressure to attend, though an absence wouldn't stop them from being able to do their jobs.

"I know who showed up," he said in an interview. "But I don't know who gave."

Democrats said they weren't enthusiastic about collecting money from lobbyists, or anyone else. But they described the fundraisers as a necessary evil brought on in part by the state's campaign finance regime, which relies on private instead of public money.

The regime also allows unlimited spending by unions and corporations for efforts independent of legislators' campaigns, in alignment with the 2010 Citizens United decision by the U.S. Supreme Court.

"No question, it's a bad system," said Anchorage Democratic Rep. Les Gara, who helped organize Monday's fundraiser. But lobbyists who give money, he added, aren't going to "get access, or anything like that."

Lawmakers said they see no distinction between the Monday fundraisers and events held any other time outside of session — though all agreed that the in-session ban on fundraising helps stop special interests from linking contributions to legislators' support for individual bills.

But the presession fundraisers did seem to perplex Fred Dyson, a retired Republican legislator from Eagle River.

"Somehow or other if you're receiving campaign gifts after the starting gun is fired, that's corrupt, but you can do it the day before and it isn't," he said in a phone interview.

Reynolds, the blogger, proposed the idea of a cooling-off period — a three-day window in advance of the session's start in which lawmakers would be barred from fundraising.

The amount of time between the start of official business and a political fundraiser would likely be a "significant factor" in determining how much donations influence elected officials, said Richard Painter, a campaign finance expert and professor at the University of Minnesota Law School who testified in defense of Alaska's donation limits at a recent federal trial.

Increasing the length of time for a fundraising ban wouldn't disadvantage one party over another, Painter said in a phone interview.

At political events, "you have relationships formed and friendships, people feeling indebted to each other."

"That will wane with time. But you need to give it time," Painter said. "The relationships that can have the most impact are the ones that are the most recent."