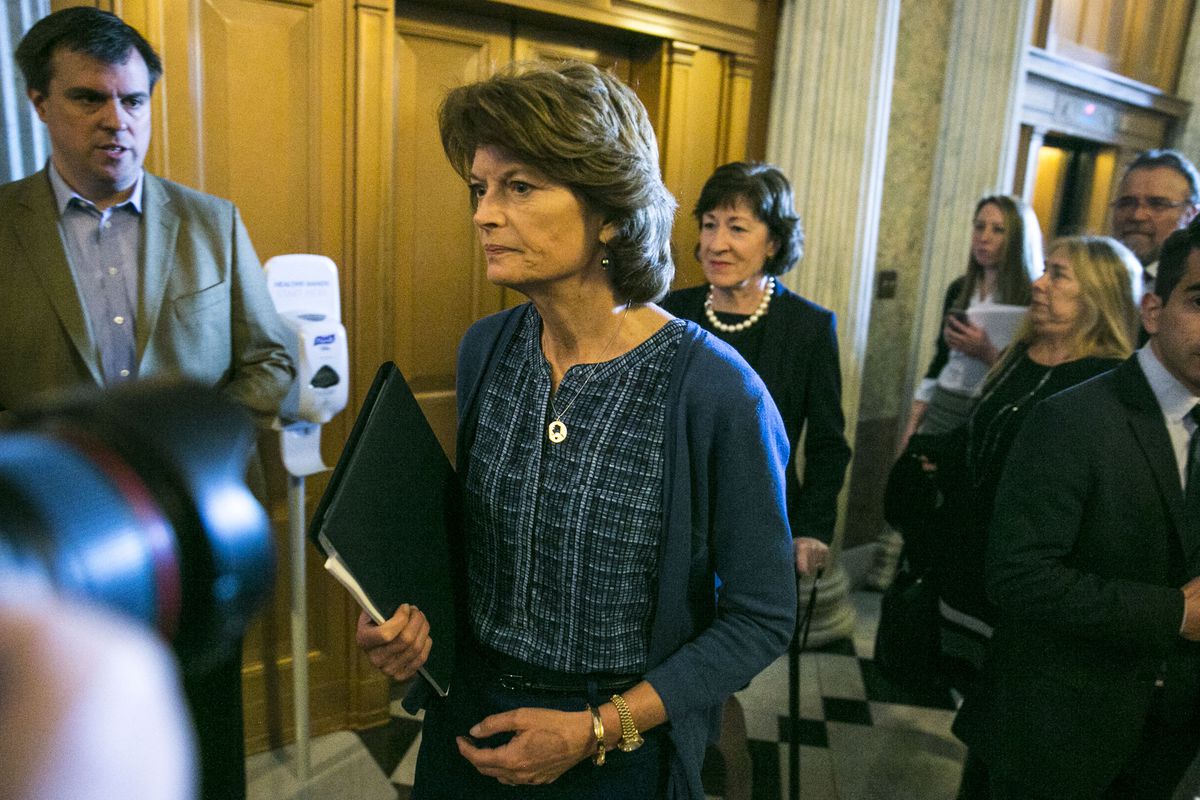 Murkowski and fellow Republican Sen. Susan Collins of Maine announced last week they would not vote for the nominee, whom they deemed unqualified for the position. The unusual move was in part driven, they said, by an unprecedented outpouring of citizen input.

On Tuesday, Murkowski and Collins both entered the Senate chamber at 12:16 p.m. EST and voted no on the nomination. Neither meandered; both left immediately after.

By the time Sen. Steve Daines, R-Mont., rushed in, just before 12:30 p.m., to cast the tying vote, a group of senators were waiting to hear the clerk announce a tally they had never before heard on a Cabinet confirmation: 50-50. Pence's tie-breaking vote was immediately considered and DeVos' nomination passed.

The vote broke almost entirely along party lines: Democrats against, Republicans for — save for Murkowski and Collins. Both said they ultimately found DeVos to be unqualified. Murkowski spent hours with the nominee one-on-one, and said she could not allay her concern that DeVos had only experience in countering public education, not supporting it. Murkowski said alternative and charter schools are often not an option for Alaskans educating children in remote areas.

"Although I did not vote in favor of Betsy DeVos for education Secretary, now that she has been confirmed by the Senate it is important that we work together as she takes the helm at the Department of Education," Murkowski said. She touted "a common goal that all children receive the best education," and said she would hold DeVos to the promises she made in meetings. That included defending public education in Alaska and supporting laws on the books that offer education to children with disabilities. DeVos also promised Murkowski that she would not take efforts to "force" vouchers on the state.

"I do look forward to her first visit to Alaska as secretary of education so she can learn more about the unique challenges and opportunities our schools face," Murkowski said.

Alaskans and people in the Lower 48 who opposed DeVos overloaded Murkowski's Washington office phone lines for weeks. They sent letters and faxes, and some showed up at her offices in Washington and Alaska.

[Murkowski office overwhelmed with calls on Obamacare and education secretary]

Many other lawmakers faced a similar deluge of calls. DeVos has drawn the most controversy and opposition of any of President Donald Trump's Cabinet nominees so far.

The billionaire school-choice advocate is a longtime GOP mega-donor, as are other members of her family. The family donated more than $43,000 to Murkowski's last campaign and just over $23,000 to Sullivan's campaign, according to the Federal Election Commission.

Murkowski also received $10,000 from the National Education Association (NEA) during her last campaign, according to the Center for Responsive Politics. The NEA was a driving force behind the campaign to upend DeVos' nomination.

Sullivan said in a statement Tuesday that after his own meetings with the now-education secretary, he "was satisfied that Ms. DeVos truly cares about the education of all of Alaska's children – both in our rural and our urban areas – and, like me, fundamentally believes that education decisions are best left in the hands of state and local authorities, and that parental involvement is critical."

Murkowski and Collins announced they would vote against DeVos a week before the vote took place, but a third Republican willing to cross the aisle did not emerge.

Alaska public schools advocates at Great Alaska Schools sent Sullivan a petition signed by more than 1,200 Alaskans before Tuesday's vote, but Sullivan had already made his stance clear.

Murkowski and Collins did not appear to be lobbying any of their colleagues to undercut DeVos' nomination. Murkowski said she felt her Senate colleagues each deserved to make an "up or down" vote on DeVos.

An effort by dozens of Democrats to persuade another Republican to join Murkowski and Collins on Monday failed.

At the White House press briefing Tuesday after the vote, Trump's spokesman Sean Spicer seemed to indicate that the president would not hold Murkowski's vote against her in the future.

Spicer was asked about a previous statement that voters would remember how senators voted on the president's nominees; whether the president reached out to Murkowski and Collins; and if he too would not forget the Republicans' actions in the DeVos vote.

[Here's how Alaska's senators are voting on Trump's cabinet nominees]

Spicer said that Trump has been clear: It is Democrats who have been slowing and halting Cabinet nominations. He did not say if Trump had spoken to Murkowski but said White House staff had been in contact with staff and members across the Senate.

"I think it's interesting that we're focusing on the votes of two Republicans when you look at the spectrum of antics that have gone on in the Democrats" to delay nominees' confirmations, Spicer said. "It's not the Republicans that have a problem here."

"This isn't an end, but the beginning of an energized, grassroots movement to protect our public schools," he said in a statement Tuesday.

Parker acknowledged that "this wasn't the outcome we wanted," but thanked the "thousands of Alaskans" who contacted their senators in recent weeks.

"Alaska Senators Lisa Murkowski and Dan Sullivan have committed to me that they will bring Secretary DeVos to our state so that we can show her what great public schools in both urban and rural Alaska look like. I look forward to her visit, so that she can hear directly the support our amazing communities have voiced for our public schools and our students," Parker said.