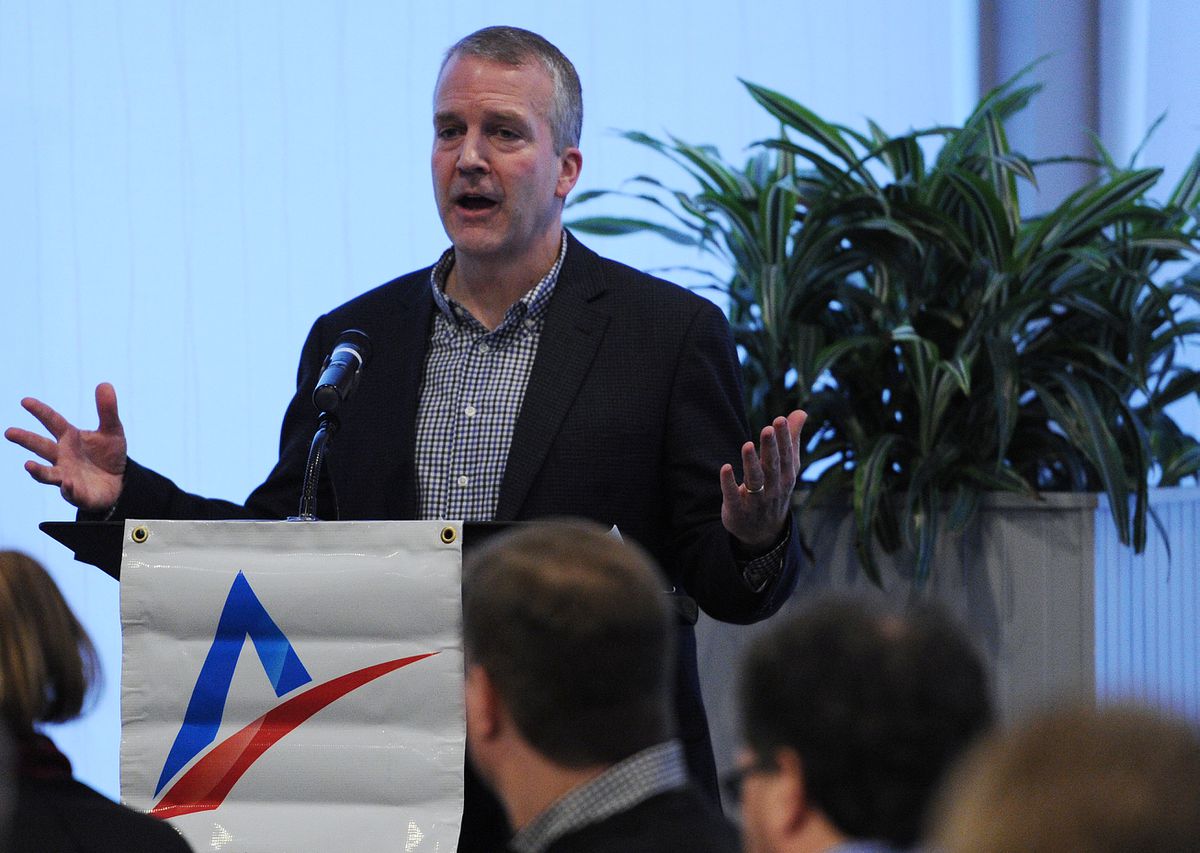 About 40 protesters gathered in front of a Midtown office building as Sullivan spoke with members of the Alaska Chamber at a "roundtable" discussion of the health care law held at the exclusive Petroleum Club of Anchorage on the first floor.

Sullivan said after the meeting that he'd heard plenty of concerns from those in attendance about the impact of the ACA, which the GOP-led Congress has vowed to repeal or replace.

"The big thing I heard from this group is they're very dissatisfied with the current law," Sullivan said. "It has driven up costs dramatically."

As the meeting got underway, protesters chanted and marched around the side of the building. A security guard stood in the building's arctic entryway.

The protest was organized by the Alaska affiliate of "Protect Our Care," a national group pushing to protect the Affordable Care Act, said organizer Andre Horton. Organizing for Action and the Alaska Nurses Association also coordinated the rally, he said.

Madeleine Grant, a doctor with the U.S. Department of Veterans Affairs, said she was protesting because she had seen the catastrophic damage that can occur when people are uninsured during her previous positions at community health centers.

"I've seen people go bankrupt, not get diagnosed, die, go blind, because they didn't have have health care, so this is very real to me," Grant said.

Mark Simon, a statewide supervisor for Organizing for Action, said protesting was important because "this event specifically seems to be part of a larger national trend among congressmen to not be really holding town hall(s). … A lot of people were hoping for town hall events, a chance for us to come out to talk to our senators."

Wednesday's meeting wasn't open to the public; Alaska Chamber president and CEO Curtis Thayer told reporters they could attend if they only quoted Sullivan, and not attendees.

The "town hall" movement is part of a nationwide push by liberal groups that are organizing local events and pushing lawmakers to hold town hall events, where constituents can confront their lawmakers in person.

Such events held in other states have recently grown raucous, with lawmakers confronted by angry constituents.

When asked why not, Sullivan replied that he considered events like Wednesday's meeting with the Alaska Chamber — the statewide chamber of commerce — to be a town hall.

"I do town halls, constructive town halls, all the time, that are targeted with specific issues," Sullivan said.

"I respect their First Amendment rights to protest," Sullivan said of Wednesday's demonstration. "And if they're interested in a constructive dialogue they should reach out to my office, they should give us their ideas. But being invited to a forum just to be shouted down is not constructive and it's not respectful to the people who have issues and want to have a good discussion."

Sullivan said that since late December, he has met with hundreds of Alaskans, from physicians to insurance companies and Alaska Native health care organizations, all of which have different views of the law.

Earlier Wednesday, he had met with union officials, during which the Affordable Care Act was also discussed, he said.

Sullivan said he would like to "repeal and repair" the health care law enacted by former President Barack Obama in 2010.

"Doing nothing right now, in my view, is not an option," he said.

Separately, Sen. Lisa Murkowski told legislators Wednesday that she would not support "a reckless repeal process" for the health care law.

Several versions of a reworked Affordable Care Act are circulating in Congress. Sullivan said he was seeing consensus that children still be allowed to stay on their parents' health care plan until they are 26, and that pre-existing conditions remain covered.

Pre-existing conditions were an "issue of fairness," Sullivan said, which lawmakers would need to find a way to make pencil out.

Alaska, with its challenges of high health care costs, a small population and many rural residents, was "ground zero" for failures of the Affordable Care Act, Sullivan said.

He said he's heard a lot about the impending Cadillac Tax — a 40 percent excise tax meant to apply to only the highest-cost plans, but which would affect a majority of plans in Alaska — as well as issues of pricing transparency for medical services. Legislators and Anchorage lawmakers are pursuing their own bills involving price transparency.

By 5:30 p.m., the protesters were leaving as the meeting inside continued. They said they planned to return to the building Thursday, when Alaska Rep. Don Young would be holding a fundraising event, also at the Petroleum Club.

Civics 101: Here's how to let your lawmakers know what you think